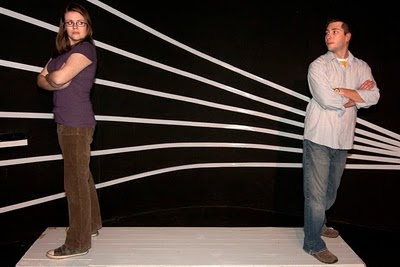 What do Santa Cruz’s Mystery Spot and Sylvia Plath have in common?

They are both part of playwright Steve Lyons’ new play, “The Mystery Spot,” now at California Stage in Sacramento, directed by Ray Tatar.

Lyons, whose plays have won multiple awards and been produced in London, Edinburgh, New York City, Boulder, Los Angeles, San Diego, San Francisco and elsewhere always knew that he wanted to write a play that used the setting of The Mystery Spot, a tourist attraction in Santa Cruz which refers to itself as a “gravitational anomaly.”

The play was one of four selected for the Ashland New Plays Festival in 2008 and had a staged reading at City Lights Books in San Francisco. It won first prize in a playwriting contest by Actors’ Theatre of Santa Cruz County in 2010.

A great part of the appeal of this staged production is actor Nick Koehler’s interpretation of the principal character Dingo. Dingo is from Oroville and has come to UC Santa Cruz for the women. He has discovered that by sitting on the quad with a cup of Starbucks coffee and an IKEA catalog, and pretending to read Sylvia Plath he can catch the attention of the ladies.

Koehler is just so darn engaging. He’s hormone infused without being either offensive or cloying.

The trick works and Dingo catches the eye of Liz, a Women’s Studies major (Emily Kentta), who actually questions him about his thoughts about Plath (nobody has ever done that before and he tries, successfully, to bluff his way through her questioning).

Kentta gives a solid performance, especially as she learns the truth about her relationship with her mother.

On learning that there is a whole department for studying women, Dingo declares himself a Women’s Studies major, though is disappointed because there is a lot of reading and not a lot of hands on projects involved.

In the meantime, to pay the bills, Dingo gets a job as a tour guide at The Mystery Spot which just, coincidentally, happens to be owned by Liz’s mother Shirley (Michele Koehler), who has a rocky relationship with her daughter.

Into the picture comes the spirit of Sylvia Plath (poet Bonnie Antonini) and the Angel Celestine (Mahlon Hall), who is sending her back to earth to learn something (which is not made clear to her–she has to figure it out for herself).

Antonini sparkles in this role, at times both moody and sultry as she plots for a way to remain on earth rather than return to the afterlife.

Also part of the cast is Mr. Williams (William A. Bergen), who takes several tours of The Mystery Spot trying to convince others that everything is just an optical illusion, and intent on suing Shirley for perpetuating a falsehood.

If the plot sounds a bit convoluted, that’s because it is. The pace is somewhat slow and not all of the actors were secure in their lines (particularly Bergen, who made a better attorney in 2007's “Patriot Act” than he does a skeptic in this play, where he seemed to suffer from opening night jitters.)

Set designer Lynn Perry has attempted to recreate the sorts of optical illusions one would find at the Mystery Spot. It is more effective in some areas than in others.

“The Mystery Spot” is an entertaining, unusual play which runs through April 10 at the California Stage’s main stage.
Posted by Bev Sykes at 12:25 PM