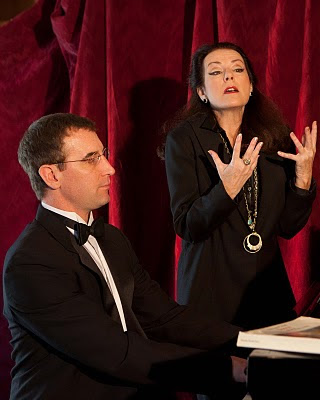 Actress Janis Stevens is a rare gem, and how lucky we are that she chooses to share her talent with us in this area.

Stevens opened in “Master Class,” which is essentially a one-woman show (though there are actually six people in the cast) at Capital Stage on Friday night. Anyone who saw that show, or who will see the show during its run through April 10, will long remember it.

Directed by Jonathan Williams, “Master Class” is based loosely on a series of 12 master classes held by Maria Callas at the Juilliard School in 1971. Callas, you will recall, was the controversial American-born Greek soprano, the lover of Aristotle Onassis and perhaps the definitive operatic diva of the 20th century.

The experience of this marvelous play begins the minute one enters the theater to see the sumptuous set design of Stephen Jones, with the grand piano on a stage surrounded by rich red and brown draperies. The lighting design of Ron Madonia will later add a magical element to the deep folds of those draperies in scenes where Callas goes through flashback moments.

Stevens is in control of the class from the moment she makes her entrance. She is funny, cruel, sardonic, abrasive and sad all at once. In her performance we see the fat, awkward, “ugly” young girl she once was and the beautiful woman she became, as well as the heartache and sheer guts it took to transform one into the other.

There is no real plot to the show. Three aspiring singers come to be critiqued by the diva. With each she is uncompromising, accepting nothing less than perfection.

Wendolyn Cooper, the first soprano, barely gets a note out before she is interrupted. Callas stresses the importance of listening to the music, of hearing the composer’s instructions in the music. Several times Callas interrupts Cooper before she has a chance to get to the second note. She can tell from her body language that Cooper hasn’t listened to the music thoroughly enough to really understand her character.

She stresses that “trying” is never good enough. A singer must “be,” must “do.”

“It’s all there in the music,” she tells the singers over and over again.

As the students struggle to understand, we see the emotion Stevens brings to her character. We see the wisdom and the vanity of Callas, the cattiness as she speaks of other singers (particularly Renata Tebaldi, with whom she had a renowned feud).

Ian Cullity is the tenor, Tony, who saunters onto the stage like he is God’s gift to women. He knows he’s good and he’s there to sing songs, not really interested in studying a character in depth. Callas is intrigued by the handsome man but her withering critique soon knocks the swagger out of him.

Laura Pyper is the second soprano, who is sent off in tears by Callas’ remarks about her choice of clothing, but she wins the diva’s respect when she returns in spite of her bruised ego and even has the chutzpah to stand up to the singer.

As she sings her aria, the student fades into the background as Callas remember her own performances and heartaches. It’s an unforgettable moment.

“Tears will get you nowhere,” she says. “Not in the theater, not in real life. Certainly not with me. No one cares how many nights I cried myself to sleep.”

Through all of the class there is Michael Wiles at the piano, sitting ramrod straight and looking like a young Peter Sellers, bringing a slight bit of humor to the proceedings, but in awe of the great singer and eager to cater to her every whim.

Rounding out the class is Andrew J. Perez, the jaded stagehand for whom Callas is just another temperamental singer there to make his day more difficult.

But the night is all Stevens and all Callas, and in the end it reveals the heart of the singer behind her brittle exterior. As she reads a card on some flowers that have been delivered, she remarks, with a sad irony, “It’s always ‘we love you,’ never ‘I love you.’ ”