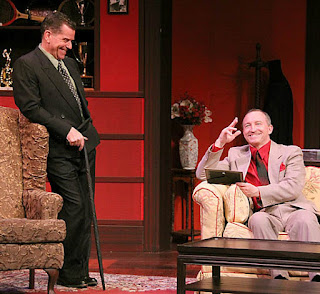 When the lights go up on Sacramento Theatre Company’s wonderful production of Frederick Knott’s “Dial M for Murder,” the first thing the audience notices is not the actors on the stage, but the gorgeous set itself.

This is Mims Mattair’s second set design for STC and it is stunning. It is the living room of the affluent couple, Tony Wendice (Matt K. Miller) and his wife Margot (Jackie Vanderbeck) in 1950s London. The apartment’s lush red walls with various embellishments and tchotchkes on the shelves are just beautiful.

But that’s just the start of the delicious things to come in this three-act classic play. Many may remember the 1954 Hitchcock movie with Ray Milland, Grace Kelly and Robert Cummings. It was a perfect vehicle for Hitchcock — a foolproof murder plot that somehow isn’t quite foolproof after all.

For former professional tennis player Tony Wendice, four out of five was enough to decide to hatch an elaborate plot to kill his wealthy wife, whom he has discovered has been cheating on him with Halliday. The wife would be out of the way and Tony would inherit her fortune.

After sending Margot and Halliday out for a night on the town, Tony makes arrangements to meet with Captain Lesgate, aka C.A. Swann (Scott Divine), an old classmate and petty criminal, whom Tony has been stalking for a long time, in order to get incriminating evidence with which he can blackmail the man into doing the murder.

It’s the perfect crime. Tony has thought of everything. Everything, in fact, except Margot surviving the attempted murder and, in the process, killing her attacker.

The investigation part of the story is right out of the 1970s detective series, “Columbo,” with Inspector Hubbard in a rumpled trench coat, always having “just one more question” to ask of Tony, who is forever offering possible answers for unanswered questions, unaware that he may be digging his own grave by doing so.

Matt Miller is at the top of his game (again) as the seemingly affable husband, with the sneering malevolence behind the friendly grin. There is a frenetic energy as he thinks on his feet when his plans go awry and an evil cackle when unexpected twists seem to be making his plan work more beautifully than even he imagined.

Jackie Vanderbeck plays the intimidated wife beautifully. Weighted down by guilt because of her earlier indiscretion, she unquestioningly follows Tony’s orders, even when they seem silly. She was somewhat sabotaged by an Act 1 dress that was just … silly, with a huge ruffle outlining the front of it (fortunately, her subsequent costumes were lovely). When the plot takes an unexpected turn, she is very flustered and displays her confused fragility well.

As for Max Halliday, Margot’s former lover, Hubbard plays him as an open, friendly American, who, at the start of the play, has accepted that his relationship with Margot is over and hopes they can now be friends. Max creates a scenario for Tony to save Margot that is closer to reality than he realizes.

Gary Alan Wright is just great as Inspector Hubbard, who never accepts the police version of who killed Captain Lesgate and keeps sleuthing even after the trial has concluded. He’s the investigator you’d like to have on your side.

Scott Divine as the luckless bungling would-be assassin has a small role, but he makes the most of it, as he slowly realizes how Tony has been playing him for months and how he has been backed into a corner from which he cannot escape.

“Dial M for Murder” is a great thriller. It’s not a mystery because we know exactly what happens, but watching how the story plays out is the fun of it all. Kudos to director Greg Alexander for commanding a tight ship and creating such an enjoyable evening — even if it does last three hours!
Posted by Bev Sykes at 3:10 PM