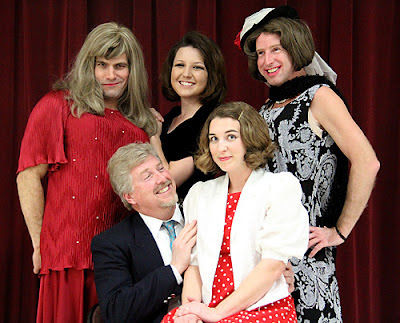 “Leading Ladies,” by Ken Ludwig, directed by Howard Hupe for the Winters Theatre Company, is comedy about two British Shakespearean actors — Jack Clark (Trent Beeby) and Leo Gable (Scott Taylor) — who find themselves so down on their luck that they are reduced to making a not-so-grand tour of rural Pennsylvania doing “Scenes from Shakespeare.”

After a disastrous performance at a Moose Lodge, Jack reads that an old lady in York, Pa., is about to die and leave her fortune to her two long-lost English nephews, whom she has not seen in a very long time. The actors resolve to pass themselves off as her beloved relatives and get the cash. The trouble is, when they get to York, they find out that the relatives aren’t nephews, but nieces!

With a suitcase full of costumes, the two men become women and the comedy is on.

Beeby and Taylor are likeable actors who try their best to use a British accent. Beeby succeeds more consistently, but Taylor gives up early into the play and only occasionally comes out with a word or a sentence that is said in a kinda/sorta British accent. But who really cares when the two are so much fun to watch on stage?

Beeby is also the more convincing of the two as a woman, while Taylor adopts such a twisted odd body language that it’s difficult to understand why anybody finds him attractive as a girl. I thought at first that his shoes hurt his feet, which would explain his odd gait, but observed later that he is able to walk upright without tripping all over himself, so the body language is just … strange.

The actors arrive at the home of Aunt Florence (Lauri Vaughn), after hearing the news of her demise. The reports of her death, however, have been greatly exaggerated and the old woman is still very much alive and unhesitatingly accepts Jack/Maxine and Leo/Stephanie as her long-lost nieces.

Vaughn is a suitably cranky old woman and spends most of the play irritated by her doctor (Jesse Akers), who seems eager to pronounce her dead.

Jack finds himself drawn to Florence’s stage-struck niece Meg (Joanie Bryant), who is not quite, but almost, engaged to the local minister, Duncan (Jim Hewlett), a strict suitor who quashes her love of theater because he feels theater people are “loud, flamboyant and too … theatrical.”

It is Duncan who feels that something is not quite right with these two fortune-hunting “nieces” and he’s determined to get to the bottom of things.

Bryant is delightful as Meg and Hewlett plays the dullard beautifully.

Jessica Eldrige plays Audrey, whom Jack and Leo meet on the train on their way to York. She herself is loosely connected to Doc’s son Butch (Jeremy Nelson), though has an eye for Jack as well. Eldrige simply sparkles in each of her scenes. She has an expressive face and an endearing manner and is a delight to watch.

The plot builds up to a hilarious production of “Twelfth Night,” which allows Jack to come in as himself to direct the show, while at the same time maintaining his alter ego as Maxine, requiring some quick costume changes.

The set is the same used for most of the plays at the Winters Community Theater, with the front door stage left instead of stage right this time, and an interesting cut-out for the entrance to the patio. The confines of the community center stage don’t allow for much variation from this set, and the company always finds interesting ways to make it look different.

“Leading Ladies” is a lightweight comedy, presented in the usual Winters Theatre Company way, which will leave the audience laughing.
Posted by Bev Sykes at 10:52 AM