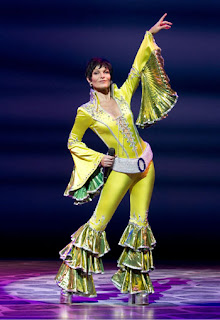 “Mamma Mia” may be the longest, fanciest paternity test on record.

This musical, celebrating the music of the 1970s Swedish group ABBA, is a collection of ABBA songs loosely hung on the story of young Sophie, on the eve of her wedding, trying to figure out which of her mother’s three old boyfriends might be her father, so that he can give her away.

Now you can find out who it is by going to the Sacramento Community Theater, through Sunday.

Though ABBA, which burst onto the scene when its song ‘Waterloo” won the Eurovision Song Festival in England in 1974, was “bigger than the Beatles” in Australia when it did its first world tour in 1977, it only had one song (“Dancing Queen”) that made it to the top of the charts in the United States.

The group enjoyed only modest success in this country until the release of its album “ABBA Gold” (after the group had broken up) in the 1990s, when everyone realized they actually knew most of the songs — they just hadn’t appreciated them before!

In 1999, Catherine Johnson decided to take 22 of the best-known ABBA songs (written by Benny Andersson and Björn Ulvaeus) and weave a story around the lyrics. “Mamma Mia” was born.

The show is now celebrating more than 4,000 performances in its 10th year at Broadway’s Winter Garden Theater and it remains among Broadway’s top-selling musicals. The current North American tour has played more than 3,700 performances in 150-plus cities, with 145 repeat visits. (This is its third time in Sacramento.)

The Associated Press calls “Mamma Mia” “a phenomenon, and it has succeeded in the impossible — making bell-bottom pants cool again!”

At Tuesday’s opening performance, many of the touring principal roles were played by understudies, but you’d be hard-pressed to know that without checking the substitute board in the lobby.

The story centers around single mother Donna Sheridan (Kaye Tuckerman) raising her daughter Sophie (Chloe Tucker) on the Greek island where Sophie was conceived, the product of a liaison with one of three men. Donna has built herself a successful taverna and has no need of a man in her life.

But Sophie is about to be married to Sky (Travis Taber) and she wants her real father to give her away. Having snooped through Donna’s diary, she invites three men — Harry Bright (Jeff Applegate), Bill Austin (John Michael Zuerlein) and Sam Carmichael (Christian Whelan) to her wedding, unbeknownst to Donna. The men all arrive, thinking Donna has invited them.

Also attending the wedding are Donna’s two friends, her back-up singers when the three were Donna and the Dynamos. Tanya (Michelle Elizabeth Dawson) and Rosie (Kittra Wynn Coomer) are delightful comediennes. It’s hard to know which is funnier — watching the tall, distinguished, somewhat bored Tanya take a pratfall or the more robust Rosie trying to fit into her old costume.

Choreography by Anthony van Lasst is a delight, particularly the male chorus on the occasion of Sky’s bachelor party (you try tap dancing in those things!).

For ABBA fans, the fun is trying to figure out which of the ABBA songs (printed alphabetically in the program, not chronologically) is going to fit in with the current plot twist.

By the end of the show, you will be having the time of your life, and enthusiastically shouting “I do! I do! I do!” with the bride. Standing and waving your arms is OK, too!
Posted by Bev Sykes at 11:44 PM