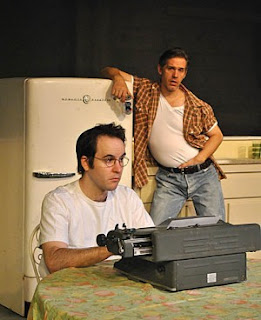 Sam Shepard’s “True West” is not a comedy, but there is enough funny stuff in this dark and gritty play to relieve the unrelenting tension from time to time.

In Capital Stage’s brilliant new production of Shepard’s 1980 classic, director Stephanie Gularte creates a world where brothers Austin and Lee circle around each other, playing the antagonistic roles they have played all of their lives, engaging in a familiar, yet potentially deadly dance of sibling rivalry.

Cole Alexander Smith is Austin, a struggling Hollywood playwright who has come to house-sit for Mom, who is off in Alaska. Austin is the “good son,” we quickly realize. Mom knew he would keep her home tidy and her many house plants watered and Austin is looking to get away from his wife and family for the quiet of Mom’s house, where he can finish his screenplay in peace.

Lee (Jonathan Rhys Williams), who has not seen his brother in five years, is the ne’er-do-well, just off of three months out in the Mojave Desert, and determined to be the raspberry seed in Austin’s wisdom tooth, as he staggers around the kitchen in a beer-besotted haze, doing whatever he can to break his brother’s concentration, trying to minimize his dedication to his work.

“You probably think that I’m not fully able to comprehend somethin’ like that, huh? … that stuff you’re doin’, that art. You know. Whatever you call it. … I did some a’ that. I fooled around with it. No future in it.”

Lee’s “future” seems to be in the income he can get from breaking and entering and stealing things from the neighbors.

It is a brilliant performance by Williams, arrogant in his slovenly, laconic attitude, yet with perhaps a bit of wistfulness about what might have been in his life.

Smith’s Austin is more of an everyman, a buttoned-down, uptight man who doesn’t quite believe in his own talents and who is nervous about an upcoming script conference with Hollywood producer Saul Kimmer (Eric Baldwin). He waters his mother’s plants and worries about their alcoholic father, and tries to write despite Lee’s constant interruptions.

Yet it is Austin who undergoes the greatest transformation as the play progresses, revealing that while he disapproves of Lee’s lifestyle, he actually is as envious of Lee’s ability to step into any situation — no matter how inappropriate — and come up owning it, as Lee is of Austin’s success.

When the producer arrives, it is Lee who takes over the interview, insisting that he has an idea for a new Western, a modern Western, though he has not put a word to paper. It is Lee with whom Kimmer makes a golf date and who comes home with a contract to write his Western.

Baldwin does well as the superficial producer, interested only in the money he can make, and not in the value of the script he is buying.

As the play progresses, the tension between the two brothers reaches the breaking point and the inevitable confrontation is cataclysmic (and, one has to believe, a nightmare for stage hands!).

“True West” includes wonderful soliloquies for both characters, including Austin’s hilarious and heartbreaking account of how their father lost his teeth, twice.

Lee’s reflections on family life as seen by someone on the outside — ”Like a paradise,” he says. ”Kinda place that sorta kills ya inside. … Blonde people movin’ in and outta the rooms, talkin’ to each other. Kinda place you sort of wish you grew up in, ya know?” — give a bit of poignancy to his character.

Janis Stevens makes a brief appearance as the men’s mother. While this could have been a time for histrionics, her beaten-down, underplayed demeanor eloquently tells us all we need to know about what it was like to raise these two, and how many times she has had to referee their spats.

This is a play that is as compelling as the need to watch a train wreck as you see it coming. The characters will stay with you long after you leave the theater.
Posted by Bev Sykes at 9:24 AM