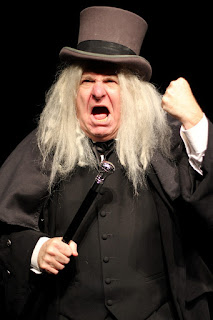 It helps to understand that the version of “A Christmas Carol” by Alan Menken, Lynn Ahrens and Mike Ockrent — currently at the Davis Musical Theatre Company, under the direction of Jan Isaacson, with musical direction by Chris Congdon — was originally produced in the mid-1990s by Radio City in New York and was a holiday favorite at Madison Square Garden for more than 10 years.

Knowing that helps to explain what scantily clad Rockettes are doing in Victorian London and why the sepulchral Ghost of Christmas Future becomes a beautiful ballerina. This makes me think that perhaps other elements I found jarring also might have been part of the original production and not just poor directorial choices.

Forgettable or not, the DMTC chorus was top-notch and in great voice for all of the ensemble numbers.

Steve Isaacson is the best person in the company to play Ebenezer Scrooge. He can make a sour face better than anyone, and his snarls read genuine, as does his glee as he realizes he has not missed Christmas after all. He is positively cute in his giddiness. Hats off to him for performing this role two weeks after spinal surgery.

Jeff Nauer played the dual roles of Scrooge’s deceased partner Jacob Marley, and, in the past, his old boss the ebullient Fezziwig. He handled both roles well and was particularly entertaining as Fezziwig. I was disappointed, however, that his entrance as the chain-covered ghost had absolutely no sense of terror about it, but that he simply walked into Scrooge’s living room as if he were the butler.

Likewise, the chorus of ghosts writhing on the floor in one of the more tuneful numbers, “Link by Link,” do so in bright light in an old Victorian mansion at night. I am still wondering why that lighting choice was made.

I was impressed in the opening scene with the young woman playing the lamplighter (Leanna Friedrich), and was pleased that she later appears as the Ghost of Christmas Past. Friedrich has a lovely voice and a wonderful stage presence, though I am confused about why the ghost would join in the company at Fezziwig’s and dance with them, if she and Scrooge are supposed to be invisible.

Adam Sartain, who plays Young Ebenezer in the past, is also the Ghost of Christmas Present and a right jolly fellow he is, too, though he knows how to get his message across when he has to. He was a highlight.

When the pair visit the home of Bob Cratchit (Scott Griffith) and his wife (Dannette Vassar), I was surprised to see that the Cratchit family now only has two children, not the traditional six, though this is not the only inconsistency with the original book and previous versions on stage and screen. We now learn that Ebenezer’s father was sent to debtors’ prison, and his mother died shortly after that, leaving Ebenezer and his sister orphans. Ebenezer’s girlfriend, too, is now named Emily, not Belle.

David Ewey is a strong presence as Ebenezer’s good-hearted nephew Fred, who never gives up on his uncle and continues to extend the hand of family and friendship.

This is a show with some production and vocal problems, but they should not detract from the overall spirit of the production. It’s a good opportunity to get kids into the holiday spirit and we can all recite, with little Jimin Moon, as Tiny Tim, “God bless us, every one!”
Posted by Bev Sykes at 5:35 AM