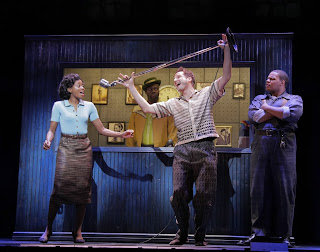 If the plot of the new touring Broadway production, “Memphis,” now at the Sacramento Community Center, sounds familiar, you may be thinking of “Hairspray.”

In “Hairspray,” misfit 1950s teenager Tracy Turnblad loves “Negro music,” which is not played on white stations, becomes a big star on Cincinnati’s version of “American Bandstand” and by the end of the show, everybody loves “Negro music.”

In “Memphis,” misfit, illiterate 1950s high school dropout Huey Calhoun loves “Negro music,” which is not played on white stations, becomes a DJ and then the star of a Memphis based version of “American Bandstand” and by the end of the show, everyone loves “Negro music.”

In fact, the finale of “Memphis,” “Steal Your Rock ‘n’ Roll” is so reminiscent of “Hairspray’s” finale, “You Can’t Stop the Beat,” that you could almost sing the “Hairspray” lyrics to the “Memphis” melody.

There are, of course, lots of differences in the two shows.  For one thing, Sergio Trujillo’s energetic choreography and the amazing dancers who execute it makes “Memphis” seem like “Hairspray” on steroids.

There is romance at the heart of “Memphis,” as Huey (Bryan Fenkart) wanders into a nightclub in the Black part of town and falls in love not only with the music, but with the owner’s sister, Felicia (Felicia Boswell), the star of the show.  Huey is convinced he can get her on the radio, but gets more than he bargains for when the two fall in love in an era where miscegenation laws are on the books and their love is impossible, a fact that Felicia knows full well, but Huey has more difficulty accepting.

Fenkart, with his strong, sometimes difficult to understand Memphis drawl is a firecracker that keeps the show moving at a frenetic pace, particularly in trying to convince would-be employers that he is right for the job.  He commandeers the mic at a local radio station and plays “Everybody Wants to be Black on Saturday Night,” which nearly gets him tossed out of the building until calls from teenagers begin to come in demanding more of this kind of music.

But the soul of the show is Felicia Boswell, giving a thrilling performance as Felicia.  Each of her songs is a standout, especially the poignant “Colored Woman,” singing about the dreams her mother told her not to dream, and which she now is cautiously allowing herself to have.

Mama told me not to dream big,
But Mama lived her life running scared.
I am stronger and I'll fight longer!
I'll do what Mama never even dared!

“Memphis” has a strong supporting cast.  Julie Johnson as Huey’s Mama has little to do for most of the show, except criticize Huey for his life’s decisions, his relationship with Felicia and just about everything, but she brings down the house with her “Change Don’t Come Easy,” after attending one of the Black churches and being inspired by its gospel choir.

Horace V. Rogers is a commanding presence as Felicia’s protective brother, Delray, who does not like her relationship with Huey and is suspicious of his promises to Felicia.

Rhett Georger plays Gator, who stopped speaking when he saw his father being lynched when he was a small child.  He is an eloquent mute and when he finally finds his voice, it brings tears to the eyes.

Will Mann is Bobby, a hulking guy who works as a janitor and who becomes Huey’s biggest supporter among the regulars at Delray’s bar.

“Memphis” is a non-stop toe-tapper and will delight anybody who loves rock and roll, soul, and gospel music, as well as a good story to time them all together.
Posted by Bev Sykes at 6:47 AM