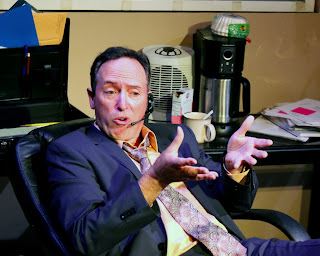 If there ever was any doubt that Eric Wheeler is one of this area’s most talented actors, a visit to Capital Stage’s production of “Mistakes Were Made,” by Craig Wright (directed by Carolyn Howarth), will convince you.

Wheeler is Felix Artifex, a second-rate theatrical producer who has discovered an unknown playwright who has written a play about the French Revolution (“Mistakes Were Made”) that Felix thinks could finally be his ticket to the big time.

Though Felix describes his career to this point as simply “filling up theaters with moldy chestnuts and two-bit stars,” he is the eternal optimist and he knows he has a potential hit on his hands. He envisions a big production, with a huge cast and a big-name star.

As the play begins, he is on the phone with Johnny Bledsoe, the Hollywood hunk-du-jour, trying to convince him to star as King Louis (“… so you tell me, Johnny … who is the star of the French Revolution, if King Louis is not the star?”). Bledsoe apparently wants a special role as the “kid,” who is the handsome pal of Robespierre, written just for him, but with more lines than Louis. He’d also like the playwright to consider making this a one-man show.

While trying to make a deal with Bledsoe, Felix is also talking with the playwright, who is adamant that he is not going to change his play. Felix walks the fine line of lying to each of the men and making impossible promises, trying to reach a compromise so the show can go forward as he envisions it.

At the same time, he is receiving frantic calls from a guy named George Cossetta, calling from a desert somewhere, with a caravan of sheep being pursued by a bunch of guys with flame throwers. This apparently is part of a hair-brained, somewhat shady scheme to raise money to finance “Mistakes Were Made.”

As the calls continue to come, bells ring, buzzers buzz, Felix’s mood, like a traveling salesman’s, changes with each caller, whether wheedling, flattering, self-deprecating, threatening or profane. In the brief respites between calls, in moments of self-revelation, he converses with Dolores (wonderfully manipulated by puppeteer Janey Pintar), whom he overfeeds — despite warnings from his secretary — while he continues to wait for a call back from his ex-wife.

In less competent hands, this play might be less entertaining, but Wheeler allows Felix Artifex to become a man desperately, if comically, grasping for that brass ring that has hitherto eluded him and shows the lengths to which he will go to get it. Ultimately, he also lets the audience see the man behind the caricature and makes him a real human being.

Like the recently staged “Fully Committed,” which was a one-man tour de force for Matt K. Miller, “Mistakes Were Made” is a wonderful vehicle for Wheeler and his opportunity to shine for 90 minutes. Wheeler makes the best of it.
Posted by Bev Sykes at 10:36 AM

Labels: Capital Stage, Mistakes Were Made