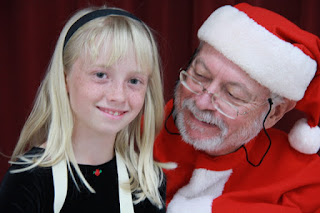 Christmas has come early to Winters, beating even the venerable old Macy’s Thanksgiving parade by a week. “Miracle on 34th Street,” directed by Anita Ahuja, opened last weekend and will run weekends through Dec. 2 at the Winters Community Center.

This stage adaptation of the beloved 1947 movie classic was adapted by Mountain Community Theater from the novel by Valentine Davies.

Yes, the pace of this production is sometimes plodding and there were lots of missed and made-up lines throughout the evening, but who cares, when everyone on stage and in the audience is having such a good time, and when you can enjoy the delight of Mikenzie Hapworth-Eldridge, the littlest elf, who stole every scene in which she appeared.

It’s the story of Kris Kringle, who has just been booted out of the senior home in which he has been living because of his insistence that he is the real Santa Claus. In a piece of serendipity, he turns up at the Macy’s Thanksgiving parade just in time to save the parade from a drunken Santa Claus, and does such a convincing job that he is offered the opportunity to be the in-store Santa for the season.

Has Tom Rost ever looked more dapper? This stalwart of many Winters theater productions is perfectly suited to the role of Kris. His humility and passion for his role will convince anyone that he really is Santa Claus. He and little Emilia Orosco also must have had a good dialog coach to be able to converse and sing together so convincingly in Dutch.

Wendy Rash is Doris Walker, the very practical, no-nonsense mother of young Susan (Sophia Tolley). Doris believes in “utter realism and truth” for her daughter, without a shred of fantasy. It is Doris who hires Kris and then must face the consequences when he begins sending customers to other stores and convincing little Susan that fantasy is important in life.

Sophia Tolley does a good job of being the “you can’t fool me” child of her mother, but slowly pulled into Kris’ fantasy world and beginning to believe that maybe there really is a Santa Claus after all.

Jim Hewlett, featured as the town cop in last year’s “Fruitcakes,” takes on the role of Fred Gayley, Susan’s neighbor, who has developed a good relationship with Susan and tries to bring a little playfulness into her life. He would also like to have a closer relationship with Doris. Gayley befriends Kris and ultimately solves all of the old man’s problems, and receives a very special gift from Kringle as well.

Dona Akers is Mrs. Shellhammer, the head of the toy department, at first entranced with Kris’ performance, then appalled when she overhears him sending parents to different stores for toys that Macy’s does not stock, or where they can buy them more cheaply. She is ready to fire him until Mr. Macy himself (Howard Hupe) gets flooded with compliments on the store’s true spirit of Christmas and comes to Kris’ support.

Eleanor Yeatman puts on her best Lily Tomlin-as-Ernestine impression to portray Miss Saywer, head of Macy’s Human Relations Department, who gives Kris a psychological evaluation and sees him as a danger to the community and is determined to have him committed to Bellevue Psychiatric Hospital.

Michael Barbour is Judge Harper, who will decide Kris’ fate at a sanity hearing, while Germaine Hupe is the formidable prosecuting attorney who gets trapped by her own granddaughter.

Shows like “Miracle on 34th Street” are wonderful for community theaters because they offer so many opportunities for members of the community to have a small role. Angel Clute-Bixby and Justice Brewer, for example, start off the evening as drummers marching onto the set and playing a little drum duet.

And there are a number of children who sit on Santa’s lap or become elves: Amelia Doran and Marc Velasquez, for example, in addition to others mentioned previously. Sam Peterson is one of the children and also does a surprisingly good job as Lou, one of the postal workers who handles Santa mail.

This is a play that exudes kindness, love, humanity and maybe a little bit of magic as well. It’s a fun family show to start the Christmas season.
Posted by Bev Sykes at 2:02 PM