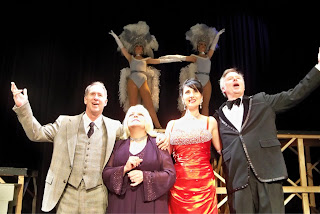 The setting for Stephen Sondheim’s “Follies” is a run-down theater, so pretty much any theatrical group, with or without a large budget, can do it! A Broadway production can add glitz for the flashback scenes, but basically any stage can be given the run-down look.

The costumes must be spectacular, those for the former glamorous stars returning to their old theater for one last hurrah before it is to be destroyed and made into a parking lot, and especially for the flashbacks to their former days, but when you have someone like Jeanne Henderson, Davis Musical Theatre Company’s faithful costumer, it’s a no-brainer.

What you must have, however, is a stellar cast of principal-quality voices and, to his credit, director Steve Isaacson has managed to assemble just that for DMTC’s current production.

The story is pretty simple — the old stars having one big reunion and reliving their former glory days. The tension comes between two couples, Buddy and Sally, and Benjamin and Phyllis. Two chorus girls dating two admirers, and later marrying, with problems in both marriages. The unfolding revelations are at the heart of the action.

Sally (Lenore Sebastian) has “run away” despite Buddy’s (Rand Martin) edict that she should not attend the reunion. Buddy follows her. Sally still has the magic in her eyes as she sees the theater again. Sebastian has two knock-out numbers with “In Buddy’s Eyes,” talking about the love her husband has for her, and “Losing My Mind,” where she is furious that she has wasted the past 30 years obsessed with a man who has never loved her and never will.

Martin as Buddy, a character reminiscent of “Chicago’s” Amos Hart, brings down the house with “The-God-Why-Don’t-You-Love-Me-Blues.”

Phyllis (Allison Lizzi) married Benjamin (John Haine), a successful politician and businessman. The two travel in elite circles, but things are not as they seem, as we learn in Act Two, as Phyllis sings the acerbic “Could I Leave You?”

Many of the actors are “shadowed” by younger members of themselves. Caitlin Martin and Thomas Eredia, as Sally and Buddy, and Michele Guerrieri and David “Turtle” Akona as Phyllis and Ben, were excellent choices, acting the scenes among the four in their younger years.

But the real soul of the work is when the former show girls relive their big moments in the days when they were working for the womanizing Dimitri Weismann (Gil Sebastian).

All are wonderful, but the surprising stand-out is Jan Isaacson as Hattie Walker, a “Broadway Baby,” the one who never achieved her dreams, but kept on slugging away “pounding 42nd Street to be in a show.” This is Isaacson’s finest hour. The beaming smile on her face and the thunderous applause that followed her unique interpretation of the song told the story. Bravo, Jan!

Mary Young, longtime DMTC diva, who has not had a real “meaty” role in a while, was also in her element as Carlotta Campion, singing “I’m Still Here,” proving that she is, indeed, still here.

Stella Deams (Christine Deamer) gets the whole troupe up dancing together to “Who’s That Woman,” shadowed by a chorus line of tap-dancing young women.

The always-wonderful Marguerite Morris as Heidi gives a moving rendition of “One Last Kiss,” shadowed by Christina Gross as Young Heidi, who perfectly mimicked all of Morrison’s movements as well.
Chris Cay Stewart as Solange LaFitte, pushing her beauty product line, sings “Ah, Paris!” to great effect, while Rick Faiola and Barbara Ann Checceti as Vincent and Vanessa, who now teach dancing at an Arthur Murray-like school, do a sweet “Bolero d’Amour.”

Musical director Adam Sartain does double duty as Roscoe Whitman, the man who always sang those “Beautiful Girls” down the staircase to make their entrance. He ultimately married chorus girl Emily (Monica Parisi).

This is a show about youthful enthusiasm and middle-aged regrets mixed together with nostalgia and cynicism, a recipe for a hearty evening of entertainment.
Posted by Bev Sykes at 4:45 PM