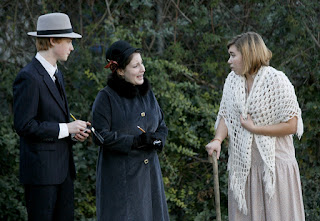 I am continually amazed that Acme Theatre Company, whose young members spend a maximum of three, possibly four years, performing with the group before moving on to college, continue to present some of the most professional theatrical productions around.

The company also continues to present shows that make us laugh and think, and especially leave us with topics to talk about, topics that may have a historical context, but that are relevant even today.

“Radium Girls,” by D.W. Gregory, covers one of those topics. At the dawn of the 20th century, according to program notes, radium was full of glowing promise and represented the bright potential of scientific progress. The Curies were celebrities and radium’s fantastical healing properties were an overnight sensation. Radium-infused toothpaste, hair creams, medicinal waters and make-up were made quickly available to the public.

In 1917, the U.S. Radium Corp. opened a factory in Orange, N.J., and began hiring young women to paint the small, glowing numbers on watch dials. The job paid well and the work was challenging, but appealing, until the dial-painters began experiencing health problems, which were not properly diagnosed.

When studies linked the strange physical conditions — rotting jaw bones, various cancers, necropsy of extremities — to radium, U.S. Radium Corp. covered up the findings and insisted that their plant was “clean” and presented no danger to the workers.

“Radium Girls” follows the case of three young women — Grace (Camila Biaggi), Kathryn (Eden Tomich) and Irene (Margaret Starbuck) — as they first work for the plant and then, one by one, begin to get ill. After Irene’s death, Grace and Kathryn decide to bring a lawsuit against the plant, and the plot is on.

Grace is the longest-lasting and hardest-fighting of the trio and we watch her character grow throughout the play. Her formal education ended at age 15 and she starts as a naive thing who trusts that her employer will take care of her, but she learns a lot along the way and ends up much stronger for it. It is a beautiful performance by Biaggi.

The play, which is staged at the Pamela Trokanski Performing Arts Center on Del Rio Place (a perfect venue for Acme!), is directed by Maddy Ryen and includes eight actors, six of whom play many different roles. There is not a weak performance in the lot.

Will Kingscott is the other actor playing only one role, that of Arthur Roeder, the president of U.S. Radium Corp., torn between his drive to lead his company and to deny any responsibility for the girls’ illnesses, and his deeply embedded desire to be a good guy. We want to hate him, but Kingscott makes us feel the character’s dilemma. In the courtroom, and later at the cemetery, he is so guilt-ridden that he cannot look Grace in the eye.

In addition to playing Irene, Starbuck also appears as Kathryn Wiley, the lawyer whose determination kept the suit active but who, in the end, uses the girls for her own group’s purposes almost as much as their employer does.

Miki Benson and Wil Forkin are perfect as the newspaper reporters hungry for every gruesome detail about the girls’ illnesses and giddy with delight when some new tragedy befalls them. They are too sadly reminiscent of the paparazzi, celebrity reporters and talking heads of today.

Forkin also plays Grace’s long-suffering, devoted boyfriend, Tom, who stands by her through the early days of what ultimately will be her fatal illness.

Antonio De Loera-Brust is both Von Sochocky, the man who originally founded U.S. Radium and who developed the radium paint that is killing the workers, and the attorney who represents the corporation in the lawsuit, who attempts to buy the girls’ silence with a fairly low settlement offer.

In smaller roles are Katy Zaragoza-Smith, Brian Stewart and Matt Fyhrie, all of whom deliver the goods for their many characters.

Kudos also to whoever had the idea of using radiation green to light the back of the stage during scene changes!

Despite the depressing topic, there are some lighter moments that break the tension, but ultimately there can be no happy ending.

Director Ryen has created a tightly woven production that should remind all of us how little practices have changed in the business world today, as far too many corporations still value profits over the welfare of their workers.
Posted by Bev Sykes at 12:27 AM