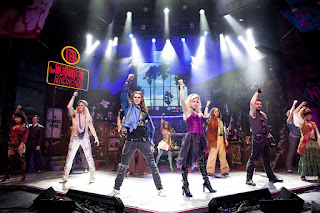 At its core, “Rock of Ages,” now at the Sacramento Community Center Theater, is a simple story — boy meets girl, boy loses girl, girl becomes stripper, boy becomes rock star, mean landlord threatens to destroy legendary nightclub, everybody learns that if they “don’t stop believing,” all will live happily ever after, with arms waved in the air in the manner of a last act finale.

(Parents should note that there is more butt sniffing, crotch scratching and simulated sex than you’d find in “Bark the Musical” at Sacramento Theater Company, along with lots of one-finger salutes, cigarette smoking and skimpy costumes. So if you intend to take your kids to show them what the rock scene was like in your day, you might want to take that into consideration.)

The always muddled sound system of the Community Center Theater made following the very thin, yet apparently convoluted plot all but impossible. However, when you add the music of iconic rockers such as Journey, Styx, REO Speedwagon, Foreigner, Pat Benatar, Whitesnake and many more (some 28 classic rock tunes of the ’80s are woven into the story, much the way ABBA songs form the basis for the plot of “Mamma Mia”), the “simple story” becomes a lively, ear-splitting trip down rock-and-roll memory lane that delighted the Sacramento audience.

Directed by Tony Award nominee Kristin Hanggi and choreographed by Kelly Devine, “Rock of Ages” is a multi-award-nominated musical (five Tonys, two Drama League Awards, two Outer Critics Circle awards).
Heading the cast is Lonny (Justin Colombo), who serves as the show’s narrator and keeps the interaction with the audience going. Colombo is heavy smoking and crass, as the role requires.

Danny McHugh is Drew, working as a busboy in the legendary Sunset Strip club, The Bourbon Room, owned by Dennis (Jacob L. Smith). Drew has dreams becoming a rock star and spends his spare time writing songs, hoping for his big break someday.

Sherrie (Shannon Mullen) is a wide-eyed, innocent young girl just arrived from Kansas with stars in her eyes, hoping to become an actress. She and Drew become instant friends when Drew helps her get a job at The Bourbon Room.

Their friendship is affected when Sherrie decides she “wants to know what love is” and has sex in the men’s bathroom with Stacee Jaxx (Universo Pereira), lead singer for the group Arsenal, who not only promptly dumps her, but insists she be fired from the club or he will refuse to perform.

With nowhere to go, Sherrie is taken in by Justice (Amma Osei), owner of a strip club, who teaches Sherrie the moves.

In the meantime, German developers Hertz (Phillip Peterson) and his son Franz (Stephen Michael Kane) want to introduce “clean living” to the Sunset Strip and plan to demolish The Bourbon Room.

This sets off a protest led by Regina (Megan McHugh) — emphasis is made that the character’s name rhymes with a female body part — who spends her time chained together with her fellow protesters marching up back and forth across the stage with their protest signs.

The playing out of the various plot lines in Act 2 is merely an opportunity for performing several well-known classic songs (“Anyway You Want It,” “I Hate Myself for Loving You,” “Hit Me with Your Best Shot,” “Every Rose has a Thorn,” “Oh Sherrie,” among others), and of course, The Bourbon Room is spared, the Germans have a change of heart, Franz gets to fulfill his dreams of owning a candy store, Sherrie and Drew reconcile (“The Search is Over”), Dennis passes on and becomes an angel and everyone realizes that the dreams you start with are not always the dreams you end up with, but they still rock (“Don’t Stop Believin’”).

It’s all very silly, but you go to “Rock of Ages” for the music, not for the story, and those for whom this is the music of their lives will come away satisfied.
Posted by Bev Sykes at 12:09 AM