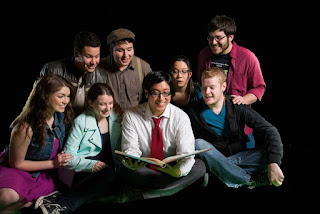 “Godspell,” the musical based on the parables contained in the Gospel of Matthew, opened at the Woodland Opera House this week, under the direction of Jason Hammond.

“Godspell,” with music by Stephen Schwartz and book by John-Michael Tebelak was first presented in 1970 as Tebelak’s masters project thesis at Carnegie Mellon University in Pittsburgh. It subsequently had a 10 performance run at La Mama Experimental Theater club in New York, where it caught the eye of producers Edgar Lansbury (brother of Angela) and Joseph Behruh, who hired Steven Schwartz to write a new song score, incorporating a variety of musical styles including pop, folk rock, gospel and vaudeville.

The newly reworked show opened Off-Broadway in 1971 and has been playing around the country ever since, including a 2011 Off-Broadway revival which played from October to June 2012.

Perhaps more than most musicals, this show seems to have a lot of opportunities for different visions, depending on director. A broad, circus-like version received a lot of critical complaint for its irreverence. For director Hammond, keeping the reverence in all the silliness was crucial.

“In all my theater ventures, I keep God center stage; but this show is particularly close to my heart in that I was raised on these parables and hold the teachings to be relevant, powerful guides in my life today,” he said.

There are 12 actors listed in the cast. “Father” (Jerry Stadel) is not seen, but is only a disembodied voice at the start of the show. “Boy” (James Hayakawa) is briefly seen at the start of the show. And Eric Alley, a part of the ensemble, was not able to participate, due to a broken foot, but his part was beautifully sung from the orchestra by musical director James C. Glica-Hernandez. So seamless was the substitution, that it almost seemed as if it had been planned that way.

After a cacophonous opening number by the ensemble representing various philosophers and their philosophies, Matt Taloff as John (and also, later, Judas) starts the actual story, meeting Jesus (Erik Catalan) and baptizing him. Taloff is a powerful presence throughout, and Catalan exudes the peaceful, yet powerful, persona of Jesus. It is easy to see how people want to follow him.

As the parables unfold, each of the cast gets his or her moment to shine, starting with the story of the master forgiving a servant’s debt. Emily O’Flaherty sings “Day by Day,” the only song which really achieved much prominence from this show. It has an almost “Hair” quality about it.

The parable of Lazarus and the Rich man is sung (“Learn Your Lessons Well”) by Emily Delk, who later does a beautiful reprise with Glicia-Hernandez.

Ayesha Thomas rocks the house with the gospel tune “O Bless the Lord, My Soul,” followed by Quentin Carbajal’s “All Good Gifts” to represent the parable of the sower and the seed.

Eimi Taormina reminds the audience of the necessity of turning to God in “Turn Back, Oh Man,” while Hannah Wallace sings a beautiful “By My Side” as the adulteress, whom Jesus rescues.

One of the many lighter moments comes with “We Beseech Thee,” separating the sheep from the goats, sung in vaudeville style by Alex Cesena.

Jesus suffering in the Garden of Gethsemane (“In the Willows”) and subsequent betrayal by Judas and crucifixion was poignantly portrayed by Catalan.

If one wanted to quibble, there are funny bits that might seem sacrilegious (such as the blessing of Goldfish and YooHoo drink at the Last Supper), but this production never loses its reverence for the word of God, and I think Jesus himself might have smiled watching it.

As I left the theater, I couldn’t help but think that if more churches incorporated some of “Godspell” into their services, church attendance might rise.
Posted by Bev Sykes at 10:13 AM