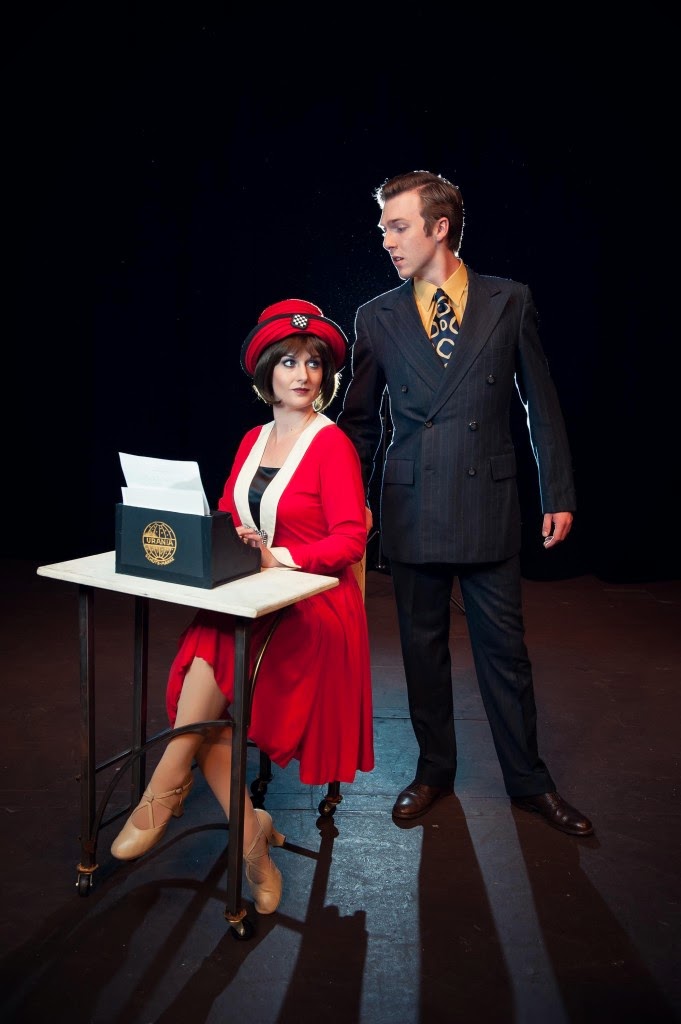 But the play knows this, and doesn't pretend to be anything but silly.

The Woodland Opera House has a talented, energetic actors, dancers, and musicians who bring this silly tale to life, under the direction of Staci Arriaga, with musical direction by James C. Glica-Hernandez.

While there is no doubting the talent on the stage, this production has a couple of problems.  The first is that there is nowhere in the program where you can find out the name of the playwright, only the copyright holder.

In fact, the book is by Richard Morris and Dick Scanlan, with a new score by Jeanine Tesori. The music is augmented by others like Gilbert & Sullivan, Jacques Offenbach, Walter Donaldson (“Mammy,” with lyrics in Cantonese, complete with supertitles), and Victor Herbert.

That this production reached the stage at all is somewhat of a miracle. It became Scanlon’s obsession.  He was an actor/writer/director recovering from an illness at a friend's summer house, who had only one videotape for entertainment: 1967's somewhat mediocre Julie Andrews/Mary Tyler Moore film musical of 'Thoroughly Modern Millie.'

As Scanlon watched the movie over and over, he began to think he could turn it into a much better stage show. Sticking to his guns during the next several years, he finally got a meeting with the film's screenwriter, Morris. The rest, as they say, is history.

The second problem with the Opera House production is the pit band.  It’s wonderful to be able to have 8 musicians to provide an authentic band sound, but in a house like this, without a real orchestra pit, there is always the difficulty of the vocals on stage being heard over the music in the pit.  No matter how good each is, if one drowns out the other, it does not do a service to the performers.

In fact, audibility was a problem throughout the production, a rare problem for Woodland. Though the script seemed to be funny, we rarely heard audience laughter, and then it was for some physical comedy on stage.  Funny lines often went without laughter.  This may be due to the performance we saw being opening night, and perhaps things will even out during the run, but it was sad to miss so much of the show.

But that’s just the bad news.  The good news is that this is a strong, likeable cast, starting with Amy Jacques-Jones in the title role.  Millie has just arrived in New York after escaping from Salina, Kansas.  She’s ready to bob her hair, shorten her skirts, and find a job working for a rich man whom she will ultimately marry.  Jacques-Jones is just great, very charismatic on stage and she dances up a storm as well.

After a mugging, wherein she loses her purse and one shoe, she meets Jimmy Smith (Seth Rogers), an apparent ne’er do well to whom she is instantly attracted, despite her life plan to marry a millionaire.  Jimmy helps her find a home in a hotel for young women, run by Mrs. Meers (Eva Sarry), who has an evil gleam in her eye.  Meers, we discover, runs a white slave operation on the side and, assisted by Ching Ho (Tomas Eredia) and Bun Foo (Hugo Figueroa), who speak no English and whose “Chinese” is translated on supertitles, she kidnaps women and ships them off to Hong Kong where they will be  sold into prostitution.

Sarry is deliciously evil and switches in and out of a faux Chinese accent (really more of a faux Japanese accent, but let it pass...), depending on which face she is presenting at the time.

Eredia and Figueroa are believable Chinese characters, and really are the good guys in the melodrama part of this silly story, as they are only working for Meers in order to bring their mother over from Hong Kong.

Millie gets a job working for the very wealthy Mr. Trevor Graydon (Horacio Gonzales). One of the show's highlights is her job interview ('The Speed Test'), which borrows a patter song from Gilbert & Sullivan's 'Ruddygore,' with new lyrics by Scanlan.

Along the way, Millie falls in love with Jimmy; it's also love at first sight for Millie’s friend, Miss Dorothy Brown (Petra Favorite) and Trevor Graydon, who instantly break into Victor Herbert's 'Falling in Love with Someone' - from 'Naughty Marietta' - as they meet each other.

But all is not about to end happily ever after, because Mrs. Meers decides to kidnap Miss Dorothy. It's up to Millie, Jimmy and Mr. Graydon - with assistance from Muzzy Van Hossmere (the incomparable Deborah Douglas-Hammond), Manhattan's most celebrated chanteuse - to get her back.

The show includes lots of plot twists and identity mix-ups, but the plot is irrelevant; the show really is about Jeanine Tesori and Dick Scanlan's music, Arriaga’s choreography and the talented cast's energetic performances.