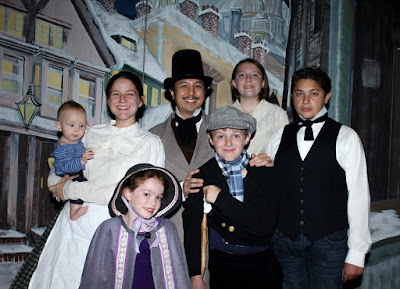 There are so many actors in the Winters Theatre Company’s production of “A Christmas Carol” that it’s a wonder there are enough residents of Winters left to fill the theater.

Forty-two characters are listed in the program, though a few actors play more than one role. Still, at the final curtain, there are an awful lot of people crowded together on the stage for a bow.
This delightful multi-media production, directed by Jesse Akers, is an adaptation of the screenplay for Alistair Sim’s 1951 movie version of the Dickens classic.

The set for this show is designed by Akers and Gary Schroeder and is humongous, stretching from wall to wall in the Winters Community Center and taking up a spot in the middle of the audience as well. Walls move in and out and it’s really quite remarkable. It is, sadly, one of the weak spots of this show that so many scene changes move so slowly.

Costumes by Heather Collins are particularly attractive, and I was pleased to see that every piece was crisply ironed.

In the role of everyone’s favorite curmudgeon is Trent Beeby, a longtime Winters favorite, reprising his role from 2008. He bellows and blusters, yet quivers in the face of the ghosts who visit him. He’s particularly engaging after his “redemption.”

Robert Payawal is Scrooge’s long-suffering clerk Bob Cratchit, trying to support his large family (including the very well-behaved baby carried by wife Sarah Hinojosa through many of her scenes). Payawal gives a strong performance, as does Manny Lanzaro as Scrooge’s militantly cheerful nephew, trying to bring the spirit of the holiday to his grumpy uncle.

We all know the story. Scrooge is visited by his old dead partner Jacob Marley (Scott Graff) who comes to warn him about the path he is following and save him from the hell that Marley himself is enduring, a threat Scrooge believes is humbug.

First comes the ghost of Christmas Past, Germaine Hupe, looking celestial in her white gown and white hair. It’s a role made for Hupe and she performs it beautifully.

In the past, Scrooge meets his former self (Tyler Tufts) and his beloved sister Fan (who does not seem to have a program listing). He falls in love with Alice (Alexis Velasquez), the love of his life, a relationship that comes to an end due to his preoccupation with business, thanks to the mentorship of Mr. Jorkin (Brad Haney), whom he ruins on his way up. Haney gives one of the stronger performances among the minor players.

At intermission, a choral group sings a few a cappella Christmas carols, led off by 7-year-old Lilac Buckser, who has such a clear and clean voice. She also plays Belinda Cratchit and the young boy at the end of the show who runs an errand for Scrooge. Buckser is adorable and a real stage kid. She will be fun to watch as she gets older, if she continues with the company.

Other beautiful solos are given by Alexis Velasquez and Christian Duran (who also plays Peter Cratchit).

As Act 2 starts, Chris Thaiss makes an overpowering Ghost of Christmas Present, showing Scrooge the realities of the town in which he lives. I think there was a mixup in the action when the set for the miners of the town opened and showed a blank stage.

But Scrooge is moved by the plight of his clerk and the tug on his heartstrings begins when he watches young Tiny Tim (Kenneth Matheson).

The always-reliable Dona Akers plays Mrs. Dilber, servant for both Marley and Scrooge. Scenes are always in good hands when Akers performs.

Scott Graf is back as the faceless, voiceless Ghost of Christmas Future, draped all in black, who is the straw that broke the camel’s back for Scrooge’s scroogeness and makes him embrace the joy of the holiday and become a benefactor to the Cratchit family.

At the conclusion of the show, Buckser and Ava Back (Mary Cratchit) stand at the door with baskets for donations to help the poor of Winters through the holidays.

God bless us, every one!