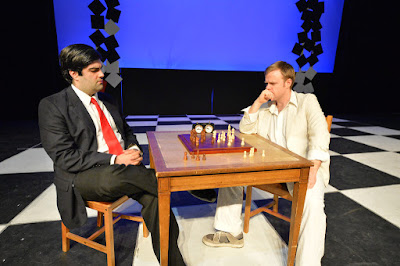 The lyrics to “Anthem,” the signature song from “Chess” — written by Sir Tim Rice, Björn Ulvaeus and Benny Andersson — have been running through my head ever since opening night:

No man, no madness
Though their sad power may prevail
Can possess, conquer, my country’s heart
They rise to fail

Though the lyrics are sung by a Russian chess champion about love of his home country, somehow it seems appropriate to sing in this country right now.

In 1980, lyricist Rice developed the concept for this musical in a five-page synopsis, exploring how the Cold War affected the lives it touched, much the same way chess pieces are moved about on a chess board.

Rice’s synopsis was expanded and, with music written by Andersson and Ulvaeus (both of ABBA), was first recorded as a “concept album” in 1984. The first staged production did not occur until 1986. There have been several rewrites, including an ill-fated three-hour production that ran for only 68 performances on Broadway.

Now this powerful show returns to the Davis Musical Theatre Company stage for the third time (having been seen before in 2000 and 2011).

The first thing to notice on entering the theater is the striking black-and-white chessboard that covers the whole stage. Various scenes will take place on the board while other characters, dressed in subtle chess character costumes, walk back and forth as if moving in a game. Set and lighting design are by Steve Isaacson, who also directs the production.

The story was inspired by the games of Boris Spassky and Bobby Fischer — two chess grandmasters meeting for two different matches, one in Bangkok and the other in Hungary, during the waning days of the Cold war. It is a show about games — the game of chess, of course, but also mind games, political games, war games and romantic games … and about the woman who manages one of them and falls in love with the other.

The Russian champion is Anatoly Sergievsky. Coury Murdock, who sadly had some vocal problems on opening night, gave a powerful performance as the tormented Russian who defects from the Soviet Union, taking with him his opponent’s manager, with whom he has fallen in love. It was a shame that he had to sing his big number, “Anthem” in a suit with pants too long for him. I didn’t want that to be a distraction, but it was.

The American champion is Freddie Trumper (Scott Scholes), a narcissist and an obnoxious jerk, who can’t seem to get along with anyone, and throws temper tantrums when things don’t go his way. Scholes has a nice swagger and presents the personality of a spoiled brat. It’s no wonder Florence, his manager, grows weary of him. Freddie’s big moment comes when he tells his life story (“Pity the Child”) and Scholes nails all of the emotion in the song.

Ashley Marie Holm is a sympathetic Florence, attempting to tame the untamable Freddie and finally growing weary of it. In Act 2 she has a heartbreaking duet with Anatoly’s wife Svetlana (Chris Cay Stewart), in which each women admits that no one woman can satisfy all of Anatoly’s needs, no matter how much she loves him (“I Know Him So Well”).

(It should be mentioned that the plot of this show sometimes seems a bit convoluted, as if major events happen between scenes and never quite make it into the scenes themselves.)

Don Draughon has a small role as Florence’s father (with the adorable Gillian Cubbage as the young Florence), explaining the game of chess to her before she is sent off to America for her own safety. His “History of Chess,” tells its story from the game’s birth in Persia, to the fall of Constantinople in 1453, to the modern-day game.

Also notable in this fine cast are Adriel Cruz as the Arbitrator, making certain that everything in the games run smoothly.

The musical director is Jonathan Rothman, and choreography for this production is by Ron Cisneros, who does especially fine work in the fun “One Night in Bangkok.”

While none of the characters in this play are particularly sympathetic, all are pawns in this game of “Chess” … and the finale scene is a real tear-jerker.
Posted by Bev Sykes at 6:36 PM