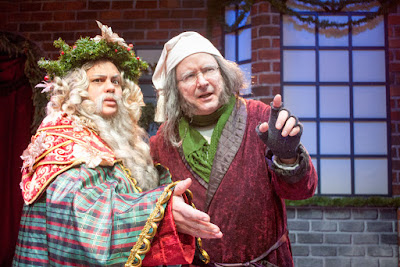 It’s hard to imagine what the dour-faced Charles Dickens would think of Buck Busfield’s adaptation of his beloved holiday classic, “A Christmas Carol,” but it’s clear that the audience loved it.

This might more appropriately be titled “Buck Busfield’s A Christmas Carol.” Busfield wrote this version last year for B Street’s little theater, but it has been expanded this year to the larger stage and I think it benefits from having greater space in which to work.

The premise, curmudgeon Ebenezer Scrooge (Greg Alexander) explains to the audience, is that it’s been 173 years since the story was first penned (as a short story) and he’s been redeemed by hundreds of theaters all over the world every Christmas season and he’s just tired of it. He pooh-poohs the various scenarios he knows so well — Jacob Marley, the spirits, Fezziwig’s shop, Cratchit’s family, yada yada yada.

This year he has a plan to resist it all. He’s going to drink lots and lots of tea and won’t fall asleep, so the spirits can’t come to wake him.

Alexander is assisted by four of B Street’s top actors — John Lamb, Amy Kelly, Kurt Johnson and Tara Sissom — who play all the other characters in the show, and you have to imagine that it looks like “Noises Off” backstage, with so many complicated, quick costume changes.

Director Dave Pierini starts off things off slowly and then the action begins to pick up with the fabulous arrival of Jacob Marley’s ghost and continues forward at an accelerated pace until the zany “intervention” by all of the characters, popping through the many doors at the back of the stage.
It kept the audience howling all through the 90-minute, two-act play.

It seems that though Scrooge does what he can to avoid the story, the characters come unbidden and tell the story anyway. And what gems these characterizations are. Lamb has a particularly difficult time as an accident-prone messenger. He also plays Tiny Tim, shocked at learning of his presumptive fate.

Johnson’s Marley is humorously frightening, and he steps into other roles as well.

Kelly and Sissom start out as two male almsmen, soliciting funds for the poor, and then play many other male and female characters throughout the show. It’s difficult to decide which was the funniest.
Both are top comediennes, though I’ve always had a soft spot in my heart for Kelly’s ability to transform herself into just about anything of any size, species or gender that she wants — a talent put to good use in this production.

Sissom is always wonderful, especially with the less-than-brilliant characters who are trying to figure life out.

But both are gems, as are their male counterparts.

The center of the action, however, is Alexander, who is bewitched, bothered and bemused as well as adamant as to his wishes, none of which is respected. Alexander is a comedian of the first order and Busfield’s Scrooge is a perfect fit.

Once again, Busfield has given the community something to laugh at (which we sorely need these days), and a loving, albeit twisted, reminder of a beloved holiday classic.

Labels: A Christmas Carol, B Street