I Ought To Be in Pictures 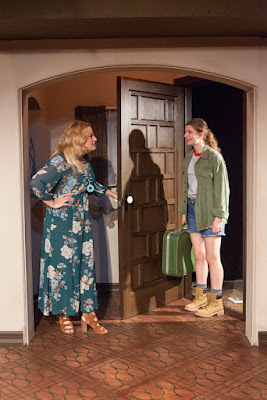 Neil Simon has written more than 30 plays and has received more Oscar and Tony nominations than any other writer.

“I Ought to Be in Pictures,” now on the Sacramento Theatre Company’s Pollock Stage, may not be one of Simon’s better plays, but in the right hands, it can be a funny, sweet story. Fortunately, STC has the right hands.

Libby arrives, unannounced, at Herb’s home. She’s 19 years old and has not seen or heard from her father in 16 years, since he left her, her mother and brother in New York. But she knows he’s a writer and expects him to introduce her to people who can get her into the movies, because she knows she is destined to become a star.

Brugger is mesmerizing. She has a self-confidence and a bravado from her first lines. She is in charge of the stage. Yet she can be naive and vulnerable, and as her relationship with her father progresses, she is able to let that vulnerability peek through, while not letting go of the brittle shield that is her protection.

What Libby finds on her arrival in Hollywood is not what she imagined. She pictured her father living in some luxury home surrounded by famous friends. Instead, he’s in a seedy rented bungalow, in the chaos of a life going disappointingly wrong, suffering from long-term writer’s block. After three failed marriages, he is afraid of commitment, though he seems to lavish all of his love on his two citrus trees, of which he is inordinately proud.

Wheeler, perhaps more familiar for his comedic roles, ultimately settles into the role of Herb and makes the chemistry between the two actors beautiful, though his early scenes were a bit too over the top. But the evolution from disinterested father to concerned father is beautiful to watch. He’s never been a father, but he wants to try, even if he sometimes screws up. He comfortably walks the fine line between comedy and drama.

The third character in this show is Natasha Hause, as Steffy, Herb’s kinda/sorta girlfriend, though she would like to make it a bit more permanent. Steffy becomes a buffer between Herb and Libby, calming him down and getting him to give the girl a chance, then supporting her when she becomes frustrated with her father’s lack of response and convincing her to give him a chance.

Hause is a lovely calming influence, not taking over the stage, but always there is a presence when needed.

“I Ought to be in Pictures” is the story of a dysfunctional family and the girl determined to fix things. There is anger, confusion, frustration, but also camaraderie, love … and ultimately redemption.

Life for none of the three characters is what they dreamed it would be, but they manage to make reality work for them.

Director Bill Zarriello keeps the action crisp, which is essential in this play and allows the comedy to come from the natural flow of dialog rather than hitting the audience over the head with lines that he wants them to know are funny.
Posted by Bev Sykes at 3:42 PM

Labels: I Ought to be in PIctures, STC