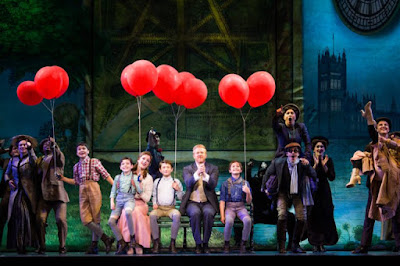 In 2014, we were fortunate to see “Finding Neverland” at its U.S. premiere in Cambridge, Mass., and I fell in love with the show. Since then, it has been modified, moved to Broadway, where it ran for 17 months and was nominated for Drama Desk, Drama League and Astaire awards. Now it is on a national tour and the California Musical Theatre opened its production this week. I still love the show.

There was loud applause before anybody had even appeared on stage, when a brightly flashing light, which didn’t need to be identified to anybody, started dancing around the curtain and the audience. Tinker Bell was welcoming us to the show.

“Finding Neverland” is the story of how the classic book, “Peter Pan,” came to be written and is loosely based on the 2004 Johnny Depp movie. J.M. Barrie (Will Ray) is portrayed as a successful playwright, unhappily married to a social climber (Janine DiVita). He is suffering from writer’s block. His producer, Charles Frohman (John Davidson, who later appears as Captain Hook) needs a new show now and Barrie has run dry.

While wandering London’s Kensington Park, looking for inspiration, he meets the Llewelyn-Davies brothers, George (Colin Wheeler), Peter (Turner Birthisel), Jack (Bergman Freedman) and Michael (Tyler Patrick Hennessy). (Each of the roles is triple cast; these were the children who played them on opening night.) He is drawn into the games of fantasy of three of the brothers, and particularly taken with the sadness of Peter, who has lost the ability to enjoy life, due to the recent death of his father.

A friendship with the boys and with their mother Sylvia (Lael Van Keuren) develops and as he learns what it is to be a child again, his creative juices start flowing once more as he imagines what it would be like if boys never had to grow up.

There is also a harridan of a grandmother, Mrs. du Maurier (Karen Murphy), determined to run her daughter’s life, a wonderful performance by Karl Skyler Urban, who makes the most of the small role of servant, and an outstanding performance by Sammy, a superb theater dog who played Porthos.

Though there is great sadness in the story, it is smoothed over by the music and the crisp, often intricate choreography (such as the “Dinner Party,” with dancing around, over and under the long dining room table). There are some simple scenes that are downright brilliant, such as the simple love song between Barry an Sylvia on an almost-empty stage with large shadows providing the only extraneous thing. Beautiful.

The musical also has its share of humor. “Do you know any fairies?” one of the boys asks one of Barrie’s somewhat effeminate actors. “My good lad, I work in the theater!” he answers, as the audiences roars.

The first act, of necessity, may run a little long due to having to get all those plot points in and bring in all the inspirations for the later play (like the handle of a threatening cane turning into Hook’s hook). But the first-act finale will blow your socks off.

By the time Act 2 rolls around, rehearsal for the play is in full swing and the action is swift and dizzying. A particularly wonderful song is “We Own the Night,” sung by the four boys on a makeshift stage with blankets forming the backdrop and wooden boxes making a stage.

The final dress rehearsal, performed in the boys’ bedroom for Sylvia, too sick to attend a performance, is lovely and as Sylvia passes into her own Neverland, the special effects are dazzling.

Performances, music, choreography and technical expertise come together to make this a magical evening for both adults and children (over the age of 4) alike.