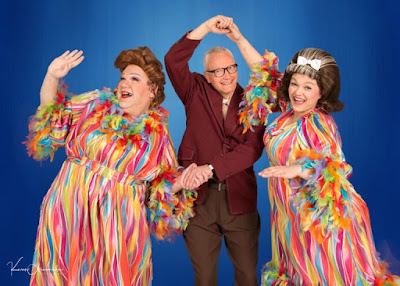 Do you have fake-news fatigue? Are you tired of tweets? Are you throwing things at TV talking heads? I have the perfect solution for you.

Get on over to Woodland and see the fabulous, high-spirited production of “Hairspray,” directed by Angela Baltezore. There is not a weak spot in this show, there are incredibly good actors, and in the end you’ll want to raise your hands in the air, with the cast, in the manner of last-act finale. You’ll go home humming “You can’t top the beat.”

“Hairspray” is the story of Tracy Turnblad, a zaftig teenager who is a fan of the 1960s American Bandstand-type show, “The Corny Collins Show.” She auditions for a spot on the show, wins and becomes an overnight celebrity — to the consternation of the show’s producer, who is also an avid stage mother pushing her daughter to eventual stardom.

Can Tracy, who has a wonderful heart, stay the course and succeed in integrating the all-white show so her friends from the African-American community can dance with her?

The success of this show depends in large measure on Tracy and her mother, Edna. Carlie Robinson is making her Opera House debut as Tracy. She has an infectious smile that brightens the room and her ebullience makes her impossible to ignore. It’s a perfect casting. She is militantly cheerful, even when things are at their most bleak.

When the John Waters non-musical stage play opened on Broadway in 1988, it starred drag queen Divine in the gender-bending role of Edna, Tracy’s mother. When Mark O’Donnell, Thomas Meehan and Marc Shaiman turned it into a musical (which won eight Tony Awards), Harvey Fierstein took on the role of Edna, (one of the Tonys). When a movie of the musical was made in 2007, John Travolta played Edna, but his performance was always “John Travolta-plays-Edna” and he never really believably became the character.

The same cannot be said for Jason Hammond who is outstanding as the mother who has not left her home in years because she’s ashamed of her weight. She makes her living by doing laundry for others. She loves and is protective of her daughter and her relationship with husband Wilbur (Bob Cooner) is beautiful to see. Their duet, “You’re Timeless to Me” was such a hit that they did an encore.

Tracy’s best friend Penny is played by the talented Katie Halls, who, though she is a second banana to Tracy, makes the most of her scenes, particularly those with “Seaweed” (Michael-David Smith), the “Negro” who becomes her dancing partner and love interest. Both Halls and Smith give powerful performances.

Deborah Hammond (Jason’s real-life wife) is Motormouth Maybelle, the owner of a downtown record shop and the host of “Negro Day” (once a month) on “The Corny Collins Show.” Hammond has a set of pipes that will tear the roof off of the Opera House and her “I Know Where I’ve Been” brought cheers from the audience.

Patricia Glass is Velma, the villainess of the piece. She is mother to Amber (McKinley Carlisle) and determined to keep her daughter in the spotlight, but she sees Tracy as a threat. Often her songs, sung with sneered lips, are reminiscent of some of the Disney villainesses, like Cruella de Vil, and she succeeds at being detestable.

Amber is a spoiled brat who thinks the sun rises and sets on her and can’t stand Tracy stealing not only her thunder, but also her boyfriend Link (Ryan Everitt), the hunk with a heart who realizes that there are things more important than being the star of a music show.

Choreography by Staci Arriaga is wonderful and executed flawlessly by the 29-person cast. More than one person in the audience got up to dance with the cast during the finale.

Set design by Craig and Joey Vincent works beautifully and the TV set for the final scene is perfect.

Denise Miles has created some beautiful costumes, particularly those for Edna.

I promise that as you leave the theater there will only be happy thoughts in your head and you will turn to each other, as my husband did to me, with only one word to describe it all: “Wow!”