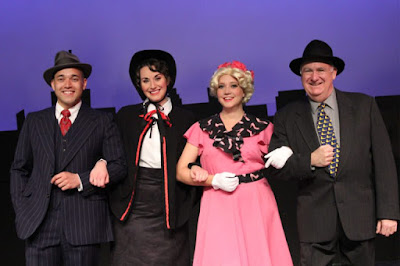 One of the best things about Davis Musical Theatre Company’s new production of “Guys and Dolls” was seeing co-producer, musical director, set, light and sound designer Steve Isaacson in the major role of Nathan Detroit (played by Frank Sinatra in the movie).

Isaacson has been sidelined for a long time with physical problems and it’s great to see him on stage again, in such a big part. And who better to play a New York wise-cracking scoundrel than a former New Yorker. Detroit runs the “oldest established permanent floating crap game in New York.”

Jan Isaacson is co-producer, director and choreographer, making this show a real family affair. Isaacson has become a very good choreographer and knows how to work with dancers and non-dancers and make everyone look good.

“Guys and Dolls” is an adaptation of several Damon Runyon stories written in the 1920s and ’30s, of a fictional group of saints (missionaries) and sinners (gamblers) and is filled with familiar songs that seem to have been around forever, such as “A Bushel and a Peck,” “If I Were a Bell,” and “Luck Be a Lady.” The music is by Frank Loesser and the book by Jo Swerling and Abe Burrows.

While there are several good performances in this production, outstanding is a newcomer to DMTC, Bridget Styles as Miss Adelaide (“the famous fiancee”), who has been engaged to Nathan for 14 years and still hopes for a wedding some day.

Styles is perfect, without going overboard, as it is so easy to do when portraying the bleach-blonde prohibition-era showgirl at the Hot Box. She is particularly good when describing the psychological effects on the body of unrequited love (“Adelaide’s Lament”).

Jori Gonzales is the idealistic, but sheltered missionary Sarah Brown, head of Broadway’s Save-a-Soul mission, determined to bring new souls to God. She is confused by her attraction to Sky Masterson (Tate Pollack, also making his DMTC debut) and is surprised to learn she has an adventurous side when Masterson convinces her to accompany him on a wild night in Havana.

Sarah’s grandfather, Arvide Abernathy is a warm-hearted missionary, with only Sarah’s good as his primary concern. Don Draughon gives a lovely soliloquy in “More I Cannot Wish You.”

Among the group of Nathan’s cronies is Nicely-Nicely Johnson (Hugo Figueroa, who, according to his program bio, is only 24 years old, but who has appeared in 26 DMTC shows). Nicely-Nicely has the show stopping “Sit Down, You’re Rocking the Boat” and sets all toes to tapping.

Mary Young, who has been with DMTC for 33 years, gives a spirited performance as General Cartwright, in town to assess the mission to see if it should be shut down or not.

Isaacson got a little carried away with the lighting design for this show, mostly with overuse of the follow spotlight which was occasionally distracting.

Jean Henderson had fun with the costumes, particularly those for the show girls at the nightclub, and also for the ensemble in the opening number, where each costume nicely explains who each person is without the need for words.
Posted by Bev Sykes at 1:13 PM