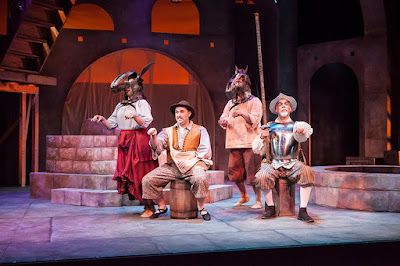 The Sacramento Theatre Company has opened a sumptuous new production of “Man of La Mancha,” directed by Michael Jenkinson.

The Broadway hit, by Dale Wasserman, with music by Mitch Leigh and lyrics by Joe Darion is a musical drama — a play within a play within a play — which tells the story of Miguel de Cervantes, thrown into prison while awaiting examination by the Holy Inquisition for having the effrontery to foreclose on a church that had not paid its taxes. Cervantes’ original text was written in 1605.
Greeting the new arrivals, Cervantes’ fellow prisoners hold their own inquisition, a mock trial, accusing the writer of being, among other things, an idealist and a bad poet. If “convicted,” he will lose his belongings, which consist primarily of a trunk of theatrical costumes and props, and an unfinished manuscript. In his defense, the author proposes he act out the story of the manuscript, using other prisoners to fill in the roles.

It is the story of Alonso Quijano, an idealistic old man who imagines himself to be living in medieval times as a knight errant, Don Quixote de La Mancha, who travels the countryside fighting beasts and rescuing damsels in distress.

“He ponders the problem of how to make better a world where evil brings profit and virtue none at all, where fraud and deceit are mingled with truth and sincerity,” he says. He promises not to allow wickedness to flourish. The delusional Quijano is an embarrassment to his respectable family.
Director Jenkinson explains that “The themes this beautiful piece explores — truth, justice, love, accountability, and hope, to name a few — are timeless in their importance, and serve as profound lessons in the human experience.”

Chris Vettel is a commanding Cervantes, a strong actor with a rich baritone, never shown better than in the classic “Impossible Dream.” Vettel has the ability to transform himself into the idealistic Don Quixote with a mere change in the look in his eyes, and to return to the person of Cervantes just as easily. It’s an amazing feat!

Quixote’s faithful squire, Sancho Panza, is played by Jake Mahler, whose earnestness and love for his master is beautiful.

Nicole Sterling was a wonderful choice of the server Aldonza, whom Quixote elevates to the role of a wonderful “lady” and calls Dulcinea. Aldonza, the sexual plaything of all the men in the hotel, which Quixote calls a castle, has the lowest opinion of herself possible and can’t understand what “good” Quixote sees in her. (“What does he want of me?”) Though, ultimately it is Dulcinea who brings the greatest comfort to the dying old man.

Matt K. Miller gives a somewhat different interpretation of the Innkeeper (also the “governor” of the prison). A wonderful comedian, Miller gives more comedic overtones to the Innkeeper than I remember seeing before and it is a nice respite from the heaviness of the script.

In the role of “The Duke” in the prison and the old man’s physician, “Dr. Carrasco” back in reality, Michael RJ Campbell gives his usual towering performance.

Samuel Clein directs an on-stage orchestra of five, which is so much better than the recorded music STC sometimes uses.

Eric Broadwater has designed an uncomfortable prison, so dark and dank that you can almost feel the cold the prisoners must endure.

Director Jenkinson says that the musical may have more relevance today than it had when originally written, with Don Quixote journeying through his fantasy world, believing that true madness is to see life as it is and not as it should be. The line in the show which gets a big, if uneasy laugh, is, “Facts are the enemy of truth.”
Posted by Bev Sykes at 2:18 PM