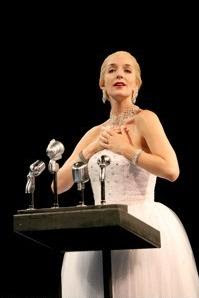 “Evita,” this week’s Music Circus production, is the third and final collaboration between British musical theater legends Andrew Lloyd Weber and Tim Rice and was the Tony Award winner for best musical in 1980. This show, which is more than a musical and less than an opera tells the story of the rise of Maria Eva Duarte, the child of an unwed mother in the rural areas of Argentina to a show business career in Buenos Aires, to her ultimate position as Eva Peron, wife of President Juan Peron, and first lady of Argentina.

The Music Circus production is under the direction of Glenn Casale and features Julie Murney in the title role. Murney turns in a lovely performances and there are moments which really shine, first of which being her arrival in Buenos Aires, an (almost) innocent young girl with the whole world ahead of her and just so excited to be in the big city.

The second, of course, is the show’s signature song, “Don’t Cry for Me Argentina” (which bears an uncanny resemblance to the Bach/Gounod “Ave Maria”), on the occasion of Juan Peron’s (Scott Blanks) assuming the presidency. Murney runs the gamut of emotions for the adoring fans outside the Casa Rosada, the Presidential Palace. At first she seems shy, overwhelmed by the crowds, then warms to them, then becomes strident in her justification for her lifestyle and underscoring her love for and belief in her husband, and finally, again shy and overwhelmed. It’s a first class delivery.

Scott Blanks, who has played Juan Peron in two different touring companies of “Evita” has a smoldering chemistry with Murney in the scene in which Peron and Eva first meet, leaving no question about how good she would really be for him. Thought he sometimes thinks it’s not worth all the effort, he allows himself to be molded by his wife until he successfully wins the support of the working class, the “descamisados,” and with it, the presidency.

Eric Kunze returns to reprise the role of Che, which he played at Music Circus eight years ago. While Che is described only as “a revolutionary,” it is clear that he is modeled on Che Guevara (whose path never crossed Eva Peron’s in real life). The character makes an effective narrator of the story and Kunze is a powerful presence, pointing out the duplicity of Eva’s character, and mocking the Peron administration and its manipulation of the lower classes.

Philip Michael Baskerville is deliciously sleazy as Augustin Magaldi, a cabaret singer who becomes the first of a series of increasingly influential men Eva uses to sleep her way to the top.

Kari Yancy plays the young girl who was Peron’s mistress until Eva shows up. Her song, “Another Suitcase in Another Hall” is very sweet and plaintive and Yancy gives it a lot of heart.

A group of military men and a group of upper class citizens play a big role in this show, expressing their displeasure at Eva’s role in Peron’s life. The problem with a small stage is that it does not give the opportunity for the close-order drill that made the original production so spectacular, but choreographer John MacInnis has created some interesting visuals that work well and convey the same message.

Marcy Froehlich’s costumes are nicely representative of the period, and I particularly liked Eva’s patterned dress, as she arrives in Buenos Aires, surrounded by muted browns and tans. A lovely visual portrait.

This is another winner for Music Circus, which only has one more show (Hairspray) to go before the end of this outstanding season.
Posted by Bev Sykes at 9:55 AM