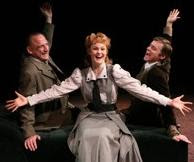 There aren’t enough superlatives to describe Music Circus’s new production of “My Fair Lady,” directed by Marcia Milgrom Dodge, and running this week at the Wells Fargo Pavilion. This is a show that I have seen many, many times and have a special fondness for and in order to impress me, it has to be done exceptionally well. Fortunately, this production has done the Lerner & Loewe musical exceptionally well.

Right off the bat with the sparkling choreography of Josh Walden, the audience knew that it was in for a treat.

I was not sure, at first, how I was going to feel about Richard B. Watson as Henry Higgins, the brilliant, arrogant linguist who agrees to give lessons to the flower girl, Eliza Doolittle (Kate Baldwin) so that she can become “a lady in a flower shop.”

Anyone who has ever seen the original stage play, or the movie, with Rex Harrison and either Julie Andrews or Audrey Hepburn has a mental image of the age difference between Higgins and Eliza as being significant. Higgins is a crusty older man and Eliza is a sweet young thing.

In this production, however, Watson and Baldwin appear much closer together in age, so a romance between them does not seem implausible. It adds an extra air of sexual tension to the scenes and Watson so quickly dispels any doubts as to his ability to handle the role that I wondered how I could have had any doubt.

For her part, Baldwin is enchanting. She is more believable as the Cockney Eliza than some I’ve seen and perfect as the “lady” she becomes. Her entrance in the gown she is wearing to the ball at which she will make her debut in high society was stunning. (Costumer Leon Wiebers outdid himself on that one!)

Her best acting may be in the scene where she says nothing at all. As Higgins, his staff, and Col. Pickering are dancing and celebrating the triumph of the ball, totally ignoring Eliza, the look on her face was eloquent and heart-breaking.

Music Circus favorite Ron Wisniski is a bombastic Col. Pickering, come from India to meet with Higgins. It is Pickering who dares Higgins to take on the project of turning Eliza into a lady and he is a major presence in all of his scenes.

J.B. Adams is a real scene stealer as Eliza’s father, Alfred P. Doolittle who has show stopping numbers in both acts, with “With a Little Bit of Luck” and “Get Me to the Church on Time.”

Dan Callaway is the lovelorn Freddie, spending his time in front of Eliza’s doorstep hoping to catch a glimpse of her.

Annie O’Sullivan does a nice job as Mrs. Pearce, Higgins’ housekeeper, and Melinda Tanner was delicious as his mother.

Rodger McDonald, a familiar name particularly to Woodland audiences, is fun in the small role of Zoltan Karpathy, Higgins’ old student who now “uses the science of speech more to blackmail and swindle than teach.”

“My Fair Lady” is a big show with big scenes, difficult to pull off in theater in the round, but Scenic Designer Christian Harvey Boy does beautifully with what he has to work with (which includes what seems to be a larger than usual group of set changers). The scene at the Ascot races was particularly clever, and again, Costumer Wiebers gets high marks for the beautiful costumes, reminiscent of the original Cecil Beaton gowns, and the amazingly intricate hats.

The Wells Fargo Pavilion was filled to capacity on opening night, so tickets may be difficult to get, but if you are fortunate to see this production you won’t be disappointed.
Posted by Bev Sykes at 1:24 PM

I saw it last night...wonderful!!!
(Review criticontheloose referred to Richard B. Watson as Baldwin) entire cast and music top notch!!!