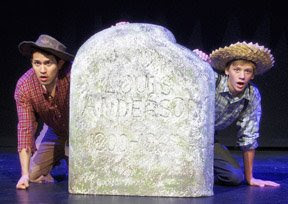 And Amy Vyvlecka thought so, when she agreed to direct the show to debut this year's Woodland Opera House Theater for Families season. The energetic production delights on many levels, despite some shortcomings in the Ludwig/Schlitz book.

While all the familiar stories are present - the whitewashed fence, the friendship with Becky Thatcher, the specter of Injun Joe, Huck and Tom attending their own funeral, and so forth - they all feel more like sorta connected vignettes than a single, smoothly flowing storyline.

The music is enjoyable but forgettable.

Although Twain never gives his Tom a specific age, the character is this play is a bit older than one's traditional mental image of the lad; this choice was made by Ludwig and Schlitz, so they could add a budding romantic relationship - and a love song, 'To Hear You Say My Name' - between Tom (Casey Camacho) and Becky Thatcher (Kara Sheldon).

The play's central relationship therefore is between Tom and Becky, rather than Tom and his best friend Huckleberry Finn, which changes the feel of the original story.

All that said, Vyvlecka's production is charming, largely due to a cast of good - and some outstanding - actors.

Asking a 14-year-old to carry a show is a tall order, but Camacho, a Woodland High School ninth-grader, is up to the task. He has it all: He sings and moves well, and has great energy and charisma on stage; you just want to smile while watching him. He bursts onto the stage during the opening number, 'Hey, Tom Sawyer'; with very few exceptions, he's in almost every subsequent scene.

Huck is played by UC Davis student Elio Gutierrez, but the age difference between the two actors isn't apparent. Gutierrez is an equally strong presence: He has his own moment in the sun with 'I Can Read!,' which he sings with the Widow Douglas (Katie Ichtertz), who has taken the homeless boy under her wing and given him a sense of family for the first time.

The song is a genuine highlight, and will leave you thinking of 'The Rain in Spain,' from 'My Fair Lady.'

Nancy Agee is a lovely Aunt Polly, often exasperated with the mischievous Tom but able to show her affection for him in 'Angels Lost.' She sings this duet with Judge Thatcher (Wayne Raymond) after Tom and Becky get lost on a school outing through nearby caves, and are presumed dead.

Vyvlecka's simple set design works wonderfully. By flying in a roof, she can indicate a church or a school. When assisted by Jeff Kean's inventive lighting design, she creates a wonderful graveyard whose boundaries extend beyond the edges of the stage. It's one of the most impressive (yet simplest) scenes in the play.

Dim lighting and a suggestion of stalactites hanging from the top of the stage beautifully convey the interior of a cave, without having to go overboard on set pieces.

Vyvlecka and Tyler Warren share credit for choreography; the moves are simple and occasionally repetitious, but they allow untrained dancers to look comfortable and experienced, thereby adding to the energy on stage.

'Tom Sawyer' is far from being the newest 'great American musical,' but this Woodland Opera House production is a lot of fun. It's certain to delight young and old alike.
Posted by Bev Sykes at 12:40 AM

I enjoyed every minute from the tension in the court room to the powerful "Angels Lost." The music my be forgettable, but nonetheless very enjoyable. The energy of the cast was truly amazing! I'm going again!.