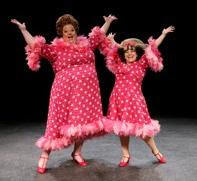 Move over, Hannah Montana, there’s a new girl in town and her name is Tracy Turnblad.

An irrepressible Joline Mujica bursts onto the Music Circus stage as Tracy in the season’s rousing closer, “Hairspray” (a Music Circus debut for this show) and she worms her way into everyone’s heart. She’s a girl with a big dream who isn’t going to let the fact that she can’t fit into a size 2 rain on her parade. She believes in the goodness of people, the equality of everyone, and in taking a stand for what you know is right.

The phenomenon of “Hairspray” began as a non-musical movie, written and directed by John Waters, in 1988. It gave Ricki Lake her first big role and featured Divine in the cross-dressing role of Tracy’s mother, Edna Turnblad. Mark O’Donnell and Thomas Meehan adapted the movie for the stage, with music by Marc Shaiman and lyrics by Shaiman and Scott Wittman. It opened on Broadway in August of 2002 and won eight Tony awards (out of 13 nominations), including an award for Best Musical. More recently it’s been turned back into a movie – a musical this time – starring John Travolta as Edna.

The setting is Baltimore of the 1960s. Tracy is an avid fan of the afternoon “Corny Collins Show,” (modeled after American Bandstand, and featuring John Scherer as the Fred Willard-esque Corny Collins). Her dream is to win a regular spot on the show in still-segregated Baltimore.

When she does and then discovers that her friends won’t be permitted to dance with her, because they are African-American, she becomes determined to get the station to let the white kids and the black kids dance together. Her controversial statement on national television, that “every day should be Negro Day”causes an uproar. Tracy is color blind when it comes to dancing partners and learned her best moves from Seaweed J. Stubbs (Wilkie Ferguson) and his pals, with whom she has spent many hours in detention.

Paul Vogt, who took over the role of Edna Turnblad in Las Vegas from Harvey Fierstein (who originated the role on Broadway) has also played the role in Boston and on Broadway. Edna is a laundress who once had dreams of fame and fortune, but as her weight has soared, her self esteem has dipped so low she “hasn’t left the house since Mamie Eisenhower rolled her hose and bobbed her bangs.” The loves of her life are her daughter Tracy and her husband, Wilbur (Dick Decareau), a novelty store owner. Edna is afraid her little girl is going to be hurt by trying to follow her dreams in a world where thin is in.

Vogt is a veteran comedian who has played a lot of roles in drag (e.g. another Edna, Edna Garrett from “The Facts of Life” on NBC’s “The Rerun Show”) and his comedic talents are never better displayed than when he is cavorting with veteran Decareau in the show stopping “Timeless to Me” (the two have an easy, appealing rapport that earns them the show’s built-in encore).

Tracy becomes the bane of existence for “Corny Collins Show” producer Velma Von Tussle (Joanna Glushak), whose life revolves around her daughter Amber (Heather Nichole White). Von Tussle is determined that her daughter will win the title of “Miss Hairspray” and she will do whatever necessary to make that happen. Glushak and White are the villains you love to hate and they succeed in their goals.

Tracy’s best friend, Penny Pingleton is played by Haley Podshun. It’s a small, supporting role, but Schwartz is delightful as the fun-loving, if not overly bright best friend whose most endearing characteristics are her love and loyalty. She begins to come into her own when the sight of Seaweed Stubbs sets her heart going pitter patter.

Her mother, Prudy (Stacey Scotte) is appalled when she discovers that there was “a Negro in the house,” because now she will never be able to sell the place. Scotte does a nice job playing the uptight Prudy, which makes her transformation, later in the show, as she begins to appreciate Seaweed’s physical attributes, very funny.

Seaweed’s mother, the rhyming couplet spouting Motormouth Maybelle is given a dazzling performance by Inga Ballard, whom Music Circus regulars may remember from some of her other show-stopping performances in shows such as “Smokey Joe’s Café,” “Ragtime,” and “Show Boat.” She brings down the house with her “I Know Where I’ve Been.”

Ron Wisniski plays several small roles, from the “Corny Collins Show” sponsor, hairspray magnet Harriman F. Spritzer to the principal of Tracy’s school and does them all well.

“Hairspray” owes a lot of its popularity to the grossly exaggerated look of the 60s hairstyles, those impossibly high beehives and the Jackie Kennedy bob. Jason Hayes gets well deserved kudos for his hair and wig design. A bow was (I assumed inadvertently) left off of Tracy’s wig on opening night, which made the look rather bizarre and it was amazing what a difference it made just adding that little element in the next scene.

This show promises high energy, delightful performances, and energetic choreography by Bob Richard and delivers on all counts.

“Hairspray” takes the audience back to a more carefree time and when the cast sings the finale “You Can’t Stop the Beat,” Tracy has won the hearts not only of Baltimore, but all of Sacramento as well.
Posted by Bev Sykes at 2:46 PM