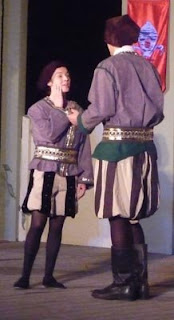 There is a phrase used in the arts, that sometimes the appreciation of an art form requires “suspension of disbelief.” That is, the audience agrees to suspend judgement in exchange for a promise of entertainment. In theater, there is smoke and mirrors, makeup, costumes and magic. We believe a 40 year old balding tenor is actually a 20 year old hunk; we believe the blonde, blue-eyed girl is really a native of a south sea island; we believe the skinny guy can really lift that huge set of weights.

It is recommended that people leave their disbelief at the Buckhorn before going across the street to see the Winters Community Theater production of William Shakespeare’s comedy, “Twelfth Night,” continuing through August 16 in the amphitheater behind the Winters Community Center, under the direction of Howard Hupe.

Janette Dahn and Dominic Orlando play twins, Viola and Sebastian, shipwrecked off the island of the shores of Illyria. Neither knows the other has survived. Viola decides to dress in her brother’s clothes and pass herself off as a young page named Cesario, under which guise she enters the service of Duke Orsino (Trent Beeby). She finds herself attracted to her new boss.

Orsino is in love with Lady Olivia (JoAnn May), grieving the death of her father and brothers. Orsino sends Cesario with messages of love to Olivia, who wants nothing to do with Orsino, but finds herself attracted to the young page.

After a lot of back and forth, intrigue and conniving, Viola and Sebastian are reunited and the citizens are shocked -- I tell you shocked – to realize that there are two of them, when they look identical

And herein lies the suspension of disbelief because not only are the twins different genders, but Sebastian is head and shoulders taller than his twin sister, a little matter the woman he has just married seems not to have noticed!

But we suspend disbelief in exchange for promise of entertainment, and entertainment there is in this rollicking production. Though fighting the sound of motorcycles riding back and forth across the bridge into Winters and wind that blew the on-stage trees over several times, the cast continued on gamely and turned in an evening worth the drive out to Winters.

The production is edited and lasts just two hours (including a 20 minute intermission) from start to finish. “We say the beautiful poetry, but we cut some of the extraneous scenes to make it run well,” says Germaine Hupe, who also acts as narrator and plays Maria, Olivia’s gentlewoman. “Gentlewoman” is an apt description of Hupe, who is gracious and “gentle,” whether she’s setting the scene, tending to Olivia, or plotting a fiendish trick on Malvolio (Michael Barbour), Olivia’s pompous head steward.

Trent Beeby is Orsino, the Duke of Illyria, and gives a solid performance.

But perhaps the night belongs to Larry Justice, as Sir Toby Belch, Olivia’s uncle, whose drunken revels are legendary. Justice is over the top and very funny, as is his foil, Sir Andrew Aguecheek (Philip Pittman), who puts up with a lot in the hope of an opportunity to woo the fair Olivia.

Dahn turns in a fine performance as Viola, completely believable in her male garb and in her feelings for Orsino.

JoAnn May is a controlled, regal Olivia, finding her grieving heart reawakened by her growing feelings for the young Cesario.

Barbour is less malevolent as Malvolio than pompously righteous, and later downright silly as he plays into the hands of the crew determined to bring him down a peg or two.

Kirsten Myers is particularly enjoyable as Feste, Olivia’s jester. She displays a lovely singing voice and her laughter as she plots with Maria, Toby and Andrew to make a fool of Malvolio is infectious

Director Howard Hupe shows up in two brief roles, as a Sea Captain in the opening scene, helping settle Viola onto the island, and later as the priest who marries Sebastian and Olivia. Though Hupe is generally in the director’s chair, even in these two small roles, his acting talent is apparent.

The setting is lovely for this summer’s evening comedy, with a stage nestled along the banks of Putah Creek, and a nice terraced seating area (though patrons might be more comfortable if they bring chairs). At $5 per ticket, it’s definitely an affordable way to spend the evening. All children under 12 are admitted free, if they come with a responsible adult.
Posted by Bev Sykes at 5:24 PM