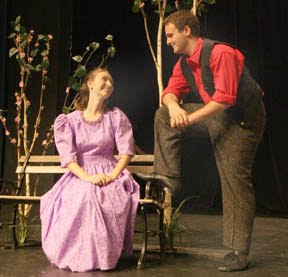 It's amazing how much really bad stuff happens in theater that nobody notices because of the pretty music.

Davis Musical Theatre Company opened Rodgers & Hammerstein's 'Carousel' on Friday, and I must have been listening more closely this time: I was appalled by the line, 'Can someone hit you really hard, but you hardly feel it at all?'

This from the daughter who has just been slapped by her ghost-dad, reminding her mother of the slap she had received from her husband, before his death. If the tunes are memorable and the clambake fun, we don't notice that the authors have just made spousal and child abuse somehow 'romantic.'

But that's neither here nor there in reviewing DMTC's delightful production, directed and choreographed by Jan Isaacson.

Matt Provencal plays Billy Bigelow, a ne'er-do-well carnival barker who falls in love with Julie Jordan (Karina Summers), a local factory worker. Provencal is a newcomer to DMTC, and he's quite a find. He has a wonderful voice, and he partners well with Summers, a DMTC veteran.

Billy's soliloquy, pondering the monumental prospect of becoming a father, is particularly good.

Summers gives Julie a quiet, gentle, loving presence that carries her from infatuation with Billy, despite his abusive treatment of her, to raising his daughter as a single parent following his death.

The rapid development of the relationship between Billy and Julie shines a spotlight on how different things were in turn-of-the-20th century America, where girls were 'loose' if they even talked with a fella without a friend around to chaperone.

Both Billy and Julie lose their jobs over an innocent conversation, and end up getting married instead. Go figure!

Julie's friend, Carrie Pipperidge, is played by Eimi Stokes: just as adorable and endearing as she could be. Carrie has her cap set on Mr. Snow (Jason Hammond), and the two go on to marry and have seven little Snows. Stokes lights up the stage whenever she appears, and her energy is infectious.

Hammond's Mr. Snow is suitably pompous and quietly domineering in his relationship with Carrie, and he makes an absolutely perfect 19th century head of the household.

Deborah Douglas Hammond, whose character seemed somehow out of place in an earlier DMTC production of 'The Cat in the Hat,' comes into her own as the motherly Nettie, who takes Julie under her wing following Billy's death. Hammond sings the showstopping 'You'll Never Walk Alone,' and does so beautifully.

Lydia Smith is a lovely Louise, Billy's 15-year-old daughter, whom we first meet dancing on the beach in a beautiful ballet number choreographed by Isaacson. Louise is a combination of Julie's gentle soul and Billy's spunk, and Smith brings her to life quite convincingly.

Nathan Mack is more slimy than menacing as Jigger, the guy who convinces Billy to rob the mill owner, to get money for the baby Billy has just discovered he has fathered.

Marguerite Morris plays Mrs. Mullins, who owns the carousel for which Billy works. Isaacson has written additional dialogue for the character, which brings her relationship with Billy full circle, and is a nice addition to the script. Morris, without a song to sing in this show, embodies the crusty Mullins and does a nice job with her.

Jean Henderson has created a beautiful array of costumes, all nicely befitting the era. I particularly liked the soft, muted colors and textures she used for Julie, and the contrast with the bold, bright colors and crisp textures for Carrie, visually expressing the personalities of each.

Jen Berry's scenic design works well, and includes a working carousel for the opening scene. There's also a particularly nice dock scene, as everyone gets ready for the first clambake of the season.

At a bit over three hours, this is a long show, but it's filled with familiar tunes like 'If I Loved You' and 'June Is Busting Out All Over,' in addition to 'You'll Never Walk Alone.'

If you concentrate on the music, the dancing, the costumes and the clambake - and overlook the plot's negative parts - 'Carousel' makes for an enjoyable evening.
Posted by Bev Sykes at 4:12 PM

Yes, the dialogue in this show is very disturbing. Some people think it's reflective of a different time period, but I disagree.

(SPOILER ALERT) The play that this musical is based on, Liliom, actually ends with the disturbing dialogue between Julie and Louise that you reference at the beginning of your review. There is no scene of Julie holding the star to her heart while ghost-Billy laments about how she'll never know how he loved her. There is no graduation scene.

The play does, however, include music (not musical numbers, just background music). I know this not because I've seen it, but because in the script, there is a stage direction for the music to stop when Julie professes that it's possible for spousal abuse not to hurt. The musicians are instructed to cut off abruptly, as though even they can't believe what Julie has just said...and then the play ends on that abrupt note. So, in the play, at least, it's pretty clear the line is meant to be disturbing.

I've argued with some people in the show as to whether this holds true in Rodgers & Hammerstein's adaptation of the play. Some people act like R&H naively kept the line in there thinking it would somehow be touching, but I strongly disagree. R&H knew what they were doing, and I'm sure they didn't consider domestic violence any more acceptable back then than you or I would today. R&H meant for the line to disturb you. The "beautiful music," I would argue, doesn't hide this; it intensifies it all the more. The audience knows from the very beginning that Billy is a scumbag, but when the music starts, it does something to us, emotionally. We can't hate him anymore. We hear the way he sings, the way Julie sings to him and about him, and, for whatever reason, that changes the way we react...but then the music stops, and we wipe the tears out of our eyes and think to ourselves, "Wow, did I really just feel sorry for a guy who beat his pregnant wife?"