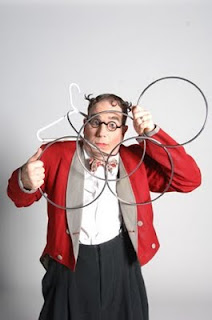 Paul Del Bene didn't dream of running away to join the circus, but - thanks to a convenient scholarship - that's what he eventually did.

And he has been clowning around now for nearly 30 years.

Through his generosity, local adults and children have an opportunity to see his talents on display, during a benefit performance for Davis Parent Nursery School Friday and Saturday evening at the Veterans' Memorial Theater, 203 E. 14th St., Davis. Refreshments will be served at 6 p.m., and the show will begin at about 7 p.m.

Although he never was the class clown in school or at home, Del Bene always was physically active; he hoped to get into college on a soccer scholarship. But since he also had done theater for many years, starting with his first professional role in 'Brighton Beach Memoirs' at age 14, he also applied for a theater scholarship.

He was, in fact, offered a soccer scholarship ... but he also received a theater scholarship, which paid more. He therefore attended The Union Institute in Ohio, as a theater major.

Slowly, over time, Del Bene realized that comic roles were better for him, although he did a lot of character work as well.

He went to the Ringling Bros. & Barnum and Bailey's Clown College, and graduated at the top of his class, then worked for them for a year in Japan.

'That's when I knew that I really liked clowning,' he said.

The next step took him to Europe, to study and determine what fit best in terms of performing. Olaf, the character he created, comes out of the Buster Keaton/Charlie Chaplin/Jacques Tati school of clowning: an Everyman character to whom anyone can relate.

'The turning point was when I worked with a clown professor by the name of Pierre Byland, in Switzerland,' Del Bene said. 'That's when something clicked for me, in terms of the simplicity of the character. If you're kind of still and wait long enough, it'll become clear what you need to do, with the public and with your own character.

'My job, in a sense, is not to make you laugh; it's to understand the situation that I'm in. Then, at the moment that we all need to realize where it needs to go next, that will be funny.

'And that takes a lot of patience.'

He warmed to his subject.

'I don't like clowns or comedy that are aggressive or foul. My job as a clown is to be a story teller. It's my profession to continue that story in whatever way I can: in a way that invites people to share it, not that you've been hit over the head with an idea.'

Most Del Bene's work has been in theaters and variety shows: the type of modern vaudeville that's still alive in Germany. For three and a half years, he worked with a professional theater company in Switzerland. He left that job to return to the United States with his wife Gail and their children Matsue and Luca, to be closer to Gail's mother, Yoshi Khyos.

'Right now, I don't have full-time work as a performer or a physical comedian,' he said. 'But I supported my family for many years in Europe. There is a community called the 'Klein Kunst Community' (Small Arts Community), which is a collection of theaters that seat anywhere from 200 to about 550, but it's all professional theater.

'The larger market for what I do, at least in the States, is private events and private parties.'

Del Bene works as a comic waiter, helping to lighten the mood.

'It's a very subtle form of engaging people as an ice breaker.'

To fill his days and support the family, Del Bene works part time as director of advancement for The Solving Diabetes Project, a medical foundation raising money for research regarding type I diabetes.

'People ask how I can do that, because they think it's so different from theater. But it's basically just storytelling. The foundation supports something I believe in. When I talk about it, I get excited about it.

'I'd love to be a full-time salaried clown again, but how is that going to happen, and how do you keep going without losing sight of who you are and what you do?

'That's hard right now, with all the financial stuff going down.'

Meanwhile, Del Bene will put his considerable talents to good use, raising money for an excellent cause.

And then, a week later, he'll be off to France for another three-week gig on the European vaudeville stage.
Posted by Bev Sykes at 11:48 PM