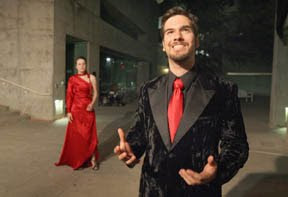 It's one thing to put on an outdoor production on a mid-summer night's evening, surrounded by tall redwood trees and warm breezes, with the audience sitting on folding chairs.

It's quite another thing to put on an outdoor production as winter approaches, when the audience must sit on hard, cold, uncomfortable concrete steps. For three hours.

Under those circumstances, not even a performance by Lawrence Olivier could make the evening entirely pleasant.

Studio 301's production of 'Macbeth' opened last weekend at the 'Deathstar,' otherwise known as the courtyard of the Social Sciences and Humanities building, across the road from the ATMs at the Memorial Union. The company provided blankets for those who had not thought to bring them, but even that wasn't enough.

I don't know when I've been so uncomfortable at a theatrical production, although I was bundled up and had brought both a blanket and a pillow to sit on.

Despite the cold and discomfort, this 'Macbeth' is a good production, with some very good performances, some nice effects and a few bizarre things.

And, truth to tell, if we wanted to experience the ambiance of a 17th century Scottish castle, I suppose sitting and shivering in the Deathstar was the best way to do it!

Directors Gia Battista and Steph Hankinson describe their play, in the program notes, as 'a call for awareness. We are living in a post-modern time, but we do not know if we have already reached the beginning of the end, if evil has already corrupted our society. This play is a spectacle, warning of what we are possibly heading toward.

'The way we present this 'horrible imagining' is by offering a sickeningly beautiful aesthetic. The hard lines of the building are juxtaposed with soft fabric, flowing movements with staccato fights.'

The action begins with the meeting of the three witches, 'the embodiment of the play's theme.' These witches - Andrea Guidry, Lauren Cole Norton and Ashley Bargenquast - are unlike witches you may have seen in other productions of 'The Scottish Play.'

For one thing, they're on stage throughout the entire play: perched high above the courtyard, reacting to - perhaps guiding? - the actions below. But their spasmodic, jerky movements take a lot of getting used to. The directors explain that this was inspired by a Japanese movement style called butoh, a style created to express the trauma of war, taboo social topics and darkness within the human spirit.

The decision to present the play in ambiguous modern dress, giving no indication as to the era, leaves the viewer to decide whether this is today, some time in the recent past, or perhaps some time in the future.

Costume designer Kate Walton, assisted by Julie Asperger, pulled the costumes together beautifully. Black is the dominant color, with brilliant red accents for Macbeth, starting slowly with red stripes on his shoes, then a red shirt for battle. Lady Macbeth's striking red evening gown is a perfect contrast to the black of those around her.

Kevin Ganger plays Macbeth, the anguished general of the Scottish army, whose blind ambition - aided by his treacherous wife (Cody Messick) - drives him to murder the good queen (Sarah Cohen). This is a tough role to pull off, because of the intensity of Macbeth's anger, fear and sorrow. The role could easily be overly dramatized, but Ganger plays it with controlled intensity.

The sweetness of Messick's appearance is quickly revealed as a facade, as we watch her goad Macbeth into the murder of the queen, and then succumb to madness as guilt over their actions begin to haunt her.

Cohen gives the queen a genuine sense of nobility. We see instantly that she is beloved by her subjects, which makes her eventual murder all the more tragic. Cohen later appears as Hecate, and brings the same kind of nobility (albeit negative) to the character of the head witch.

Michael Lutheran gives an intense performance as Macduff, particularly when he learns of his family's murder. Brother David Lutheran brings a note of lightness to his outstanding physical comedic role as the porter. Although a small role, he owns it.

Kris Ide's performance as the noble Banquo is good, but perhaps even better as he joins the witches and creates the specter of his own ghost, seen only by Macbeth.

A lot of blood was spilled in the Deathstar, as everyone who dies does so with an impressive display of blood. That said, the character who got stabbed on the right side and bled on the left side stretched credulity a bit.

All told, though, this 'Macbeth' is very good. I just wish it hadn't been so darn cold!
Posted by Bev Sykes at 4:10 PM

I am forwarding this review to Sarah— I didn't even know she'd gotten this role! (Better than Malcolm, whom she says has the hardest line in the play. In reply to "Your noble father's murdered," he says "Oh, by whom?" which is pretty hard, honestly.)