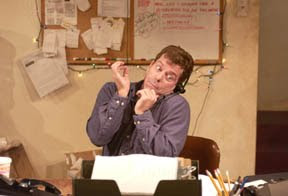 Matt K. Miller is a wonderfully talented actor. After having watched him play Shakespeare (set in the old West!), Scrooge, Tartuffe and his hastily written retrospective of his own life - a last-minute substitute for 'Noises Off' last season, when finances prevented Sacramento Theater Company from presenting the larger work - I'm convinced the versatile Miller could do anything.

In Becky Mode's one-act play, 'Fully Committed,' which just opened at STC, he not only can do anything, he does everything.

In an era when TV shows such as 'Top Chef,' 'Iron Chef' and 'Restaurant Wars' have ignited an interest in haute cuisine and posh restaurants, this timely piece perhaps tells us more than we really want to know about what goes on behind the scenes at some of the country's top restaurants.

STC's small Pollock Theater provides the opportunity for a more intimate setting, and the lights come up on a bare stage. At one side is an intercom, which allows communication with the restaurant staff; the other side features a telephone with a direct line to the chef. The middle of the stage has a cluttered desk with a switchboard.

The walls are hung with bulletin boards, posters, notes and warnings. A file cabinet is close to a table littered with old coffee cups, paper plates and napkins. An opening at the back has steps that lead off stage.

Although the restaurant never is named, we know it must be one of the 'in' places, since reservations for dinner must be made months in advance.

(The play is based on playwright Mode's experiences while working at an upscale restaurant in the 1990s, though she assures her audience that these characters aren't based on real people.)

'Sam' arrives as all the machines are ringing. He's overwhelmed and waiting for his co-worker Bob to join him, then learns that Bob's car has broken down and is stuck pending the arrival of a tow truck. This leaves Sam to handle all the calls, complaints, demands and more, and we're off and running for the next 90 minutes.

Unlike shows such as 'Greater Tuna,' where characters are created by quick costume changes, Miller does it all with body language and tone of voice: from the acerbic chef to the hyperdramatic 'Mrs. Sebag'; to the French maitre d' who refuses to take a call from a customer because 'she's so ugly'; to the deliciously gay Brice, from Naomi Campbell's office, with a list of ridiculous demands for her party of 15.

Along the way, we also learn bits about Sam's own history through conversations with his brother and the lonely father who hopes Sam can get Christmas off and be home, so they can celebrate together. We also learn that Sam is a struggling, would-be actor waiting for a call-back from his agent's office, regarding a recent audition.

Every single personality change is accomplished flawlessly, sometimes in the blink of an eye, with never a noticeable glitch. Much of the time, Miller runs from one side of the stage to the other, answering the staff in the front of the house, and then the chef, and then back to the reservation phone.

Miller first performed this tour de force back in 2002, when it was directed by Glenn Casale. Much of Casale's direction remains for the 2009 production, with additional direction by Gary Alan Wright.

As the 90-minute show progresses, Sam begins to develop a spine, and to appreciate his own worth: a logical transition, given the kinds of things he has heaped upon him.

By the end of the show, the audience is breathless from the relentless pace. One can only imagine how Miller must feel.

This is should-not-be-missed theater.
Posted by Bev Sykes at 8:14 AM