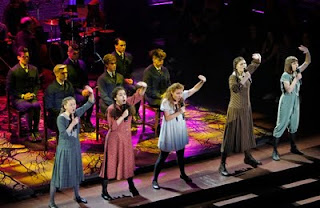 How many cliche bad adolescent things can you fit into two plus hours of “Spring Awakening,” this week’s Broadway Series offering at the Sacramento Community Center.

Fill a stage with hormone raging teenagers (and to make it even worse, set them in repressive Germany of the 1890s, where corporal punishment is the answer to every parental or educational problem and “communication” had not been invented yet). To this mix add:

and, for ducks toss in a whole song, the title of which is a word that can’t be printed in a family newspaper, complete with the obscene gestures that go along with it.

This may give you a hint as to why the theater was not very full, and why so many people left at intermission.

HOWEVER, stick with me here.

Surprisingly, it was not as bad as I expected and on some level I actually kinda sorta liked it. Not a lot, but a little.

“Broadway’s most talked about musical,” with book and lyrics by Steven Sater (based on the play by Frank Wedekind) and music by Duncan Sheik won 8 Tony awards (out of eleven nominations) in 2007 and has acquired a cult following. It just may not be the right fit for Sacramento audiences.

There is a cast of 13 performers, with 4 more who sit on stage and add to the vocal ensemble pieces. Most are quite good in their roles, with special mention made of Jake Epstein as the handsome hero, Melchior, Taylor Trensch as the geeky Moritz (with an impossibly tall hair do that looked like a carefully manacured lawn), and Christy Altomare as the heroine, Wendla. I also particularly liked Kimiko Glenn as Thea, not because she did anything unusual, but just because she was so darn cute.

This is not a “book show,” but it does manage somehow to get from A to Z, making many, many stops along the way for different plot elements.

While it’s a bit of a jolt to watch, for example, a room full of 19th century German students reciting Latin, and then break into very modern rock type music, you make that mental adjustment quickly. While there is enough rock in the music to satisfy the young in the crowd, surprisingly most of the music, while unforgettable, is soft and melodic.

Some have an incredible intensity, like “The Dark I Know So Well,” wherein Ilsa (Steffid) describes the attentions of her father

She said, “Give me that hand, please, and the itch you can’t control.
Let me teach you how to handle all the sadness in your soul.
[insert lyrics here better not printed]
She said, “Love may make you blind, kid, but I wouldn’t mind at all.”

I wondered about the reaction of all those late middle aged subscribers in the audience...the couple next to me did not come back after intermission.

The set is open with seating along the sides of the stage, for members of the audience and along the back for the eight piece band. The walls hint at a gothic building which can be either a schoolroom, a church, or a cemetery–and is, at one time or another, each one of those settings.

Lighting by Kevin Adams is outstanding, with angry neon red lights for the most intense moments, and beautiful blue orbs for gentle, loving ones.

For anybody who has struggled to get through the sexual frustrations of adolescence...and perhaps for any adult who has to deal with a teenager struggling to get through adolescence...there will be lots of moments with which to identify. But this is not a show that is going to be everyone’s cup of tea.
Posted by Bev Sykes at 4:59 PM