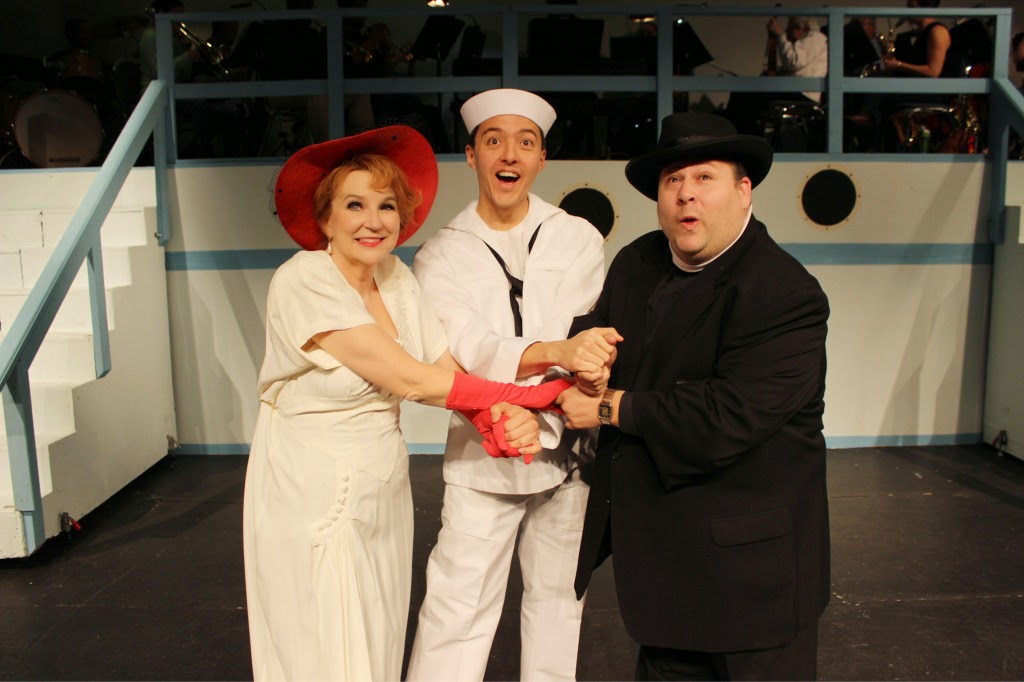 A patron stopped me on my way out of the Jean Henderson Performing Arts Center at the conclusion of Davis Musical Theatre Company’s new production of “Anything Goes.”

“If you weren’t having fun during this one,” she said, “you should check your pulse because you might be dead.”

I agreed. This sparkling, toe-tapping, high-kicking, silly musical by Cole Porter (with book by P.G. Wodehouse and Guy Bolton), directed by John Haine and choreographed by Kaylin Scott, is a delight from start to finish.

And guess what? DMTC has an orchestra! They’ve been telling us for years that they did, but now they have put the musicians front and center at the top of the simple, but attractive ship deck designed by Steve Isaacson. Hearing them with no stage floor to muffle their sound was wonderful, and we found out what a really good band they are.

It’s a dream cast. Everyone is first-rate, even 15-year-old Anthony Swaminathan, a member of DMTC’s Young Performers’ Theater, who is one of the ship guests, but also comports himself well in the role of a reporter at the start of the show.

Adam Sartain is the blow-hard Wall Street banker Elisha Whitney, with an eye for the ladies and a taste for good spirits.

Billy Crocker (Andy Hyun) is Whitney’s best boy, who sneaks aboard the ship to woo his girl Hope (Katherine Tracy) away from her stuffy fiancé Evelyn Oakleigh (Joel Porter). It’s nice seeing the talented Hyun in such a big part and he sings, acts and dances up a storm. He handles the rather difficult and odd song “All Through the Night” like a pro.

Tracy plays the dutiful debutante well, allowing her true feelings for Billy to slowly rise to the surface.
Her mother, the stuffy socialite Mrs. Evangeline Harcourt, is played by Cyndi Wall, who has the best disdainful glance ever.

As for Joel Porter, he’s just a delight as the pompous Brit, marrying American aristocracy, but gradually finding his taste turning to the dynamic Reno Sweeney (Chris Cay Stewart), who is more his age and who brings new life into his predictable routine. Their duet, “Let’s Misbehave,” is a highlight.

Stewart is a dynamite Sweeney, an evangelist-turned-nightclub singer. The role was originally written for Ethel Merman and, even if you didn’t know that, you would guess from just listening to the songs. Stewart makes the role her own and shines throughout, particularly when her religious roots come out for “Blow, Gabriel Blow.”

Mike Mechanick is con man Moonface Martin, Public Enemy #13, disguised as a minister, who has some of the best lines in the show and delivers them perfectly, to the delight of the audience. His “Be Like the Blue Bird” is not to be believed.

His girlfriend Bonnie is given a wonderful performance by Jessica Arena, who lit up the stage at every entrance. The character of Bonnie was a minor one in the original 1934 production but expanded for the 1962 revival and how lucky we are that Arena was given the expanded version to play. She is a real firecracker who is such fun to watch explode.

Costumer Jean Henderson has outdone herself for this production. From the various skimpy costumes for Sweeney’s “Angels” to Reno’s dazzling Act 2 gowns, everything was perfect, even the ingenious disguises for Billy, as he tries to keep from being picked up as a stowaway.

And for DMTC regular audience members, have a good time playing the DMTC version of “Where’s Waldo,” spotting favorite Mary Young among the passengers.

This is a wonderful way to start the 2015 theater year.