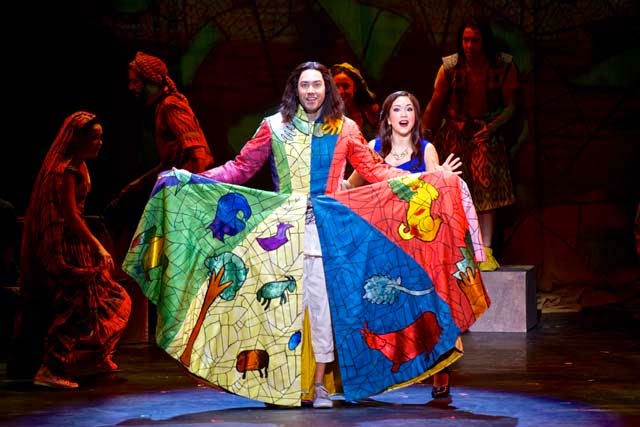 Andrew Lloyd Webber was only 19 years old when he was asked to write a piece for a local school choir, to sing during an Easter service. He asked his friend Tim Rice (then 22) to write the lyrics, and the two settled on the Genesis story of Joseph and his coat of many colors. As originally performed by those children, the work was only 15 to 20 minutes long.

After a number of additions, changes and performances by amateur companies, the full production of “Joseph and the Amazing Technicolor Dreamcoat” opened on Broadway in 1982. Now it has returned to the Sacramento Community Center Theater.

The show, the retelling of the beloved Bible story, is full of all those things that make for a fun musical – sibling rivalry, betrayal, fratricide, deception, slavery, seduction, imprisonment, execution, and famine. A natural for a fun evening.

The new production, under the direction and choreography of Andy Blankenbuehler, is a lively, energetic 90 minutes of nonstop singing and dancing. In creating a version of the musical more to 2015 tastes, Blankenbuehler has eliminated a children’s chorus, present in many productions (since this was essentially a children’s story that is told as a dream of the lead character) in his cast and has replaced them with scantily clad women and bare-chested men, which the audience didn’t seem to mind at all.

Though there is a graphic seduction scene it is done so tastefully that even the little 3-year-old sitting in front of me wouldn’t realize what was going on, so it’s quite kid-friendly.

In this day of digital effects, one does not have to have expensive sets to create an elaborate setting. The actual set pieces for this show (designed by Beowulf Boritt) are curtains, moveable blocks and steps, but the projections on the “walls” and in one instance the costumes of the performers are pretty spectacular and make you forget that there are actually no impressive sets on the stage. All are enhanced by the lighting design of Howell Binkley.

But if there were savings on the set, there was none in the costumes of designer Jennifer Caprio, especially the coat of many colors itself (particularly in its second appearance) and the costume of the Pharaoh.
Leading the cast are newlyweds and former American Idol contestants, Ace Young as Joseph and Diana DeGarmo as the narrator.

It is DeGarmo who keeps the story flowing in the most demanding role of the show. She’s energetic, cute and funny and has a set of pipes on her that rocks the house, though it tended to be shrill, which hurt my ears.

Young is a fine Joseph, looking tall and handsome with a charisma that charms the audience. He gets the opportunity to display his voice in the solo “Close Every Door.”

But the supporting cast actually make more of an impact. Brother Reuben (Brian Golub) takes the lead in “One More Angel in Heaven,” a salute to country and western music, while brother Simeon (Paul Castree) shines in “Those Canaan Days” (a parody of French ballads) and Judah (Max Kumangai) heads up “Benjamin Calypso.”

The show stopper, though, is always Pharaoh’s song, “Song of a King,” sung by Ryan Williams in the manner of an Elvis Presley. Williams gyrates and thrusts his hips, courts the audience and pays homage to the King of Rock and Roll. His encore is built into the song and the audience loved it.

There is stunningly precise choreography in several numbers. Particularly outstanding is “Canaan Days,” with the antics that go to divvying up a rat into 11 portions to serve for dinner.

The show’s final number is the ballad “Any Dream Will Do,” a beautiful duet between the Narrator and Joseph, and it set up the finale, “Megamix” with all the cast dressed in white. It seemed to be as long as the entire second act and had the audience clapping and bouncing along with the cast.

This show is always fun and this production does not disappoint.
Posted by Bev Sykes at 12:18 PM