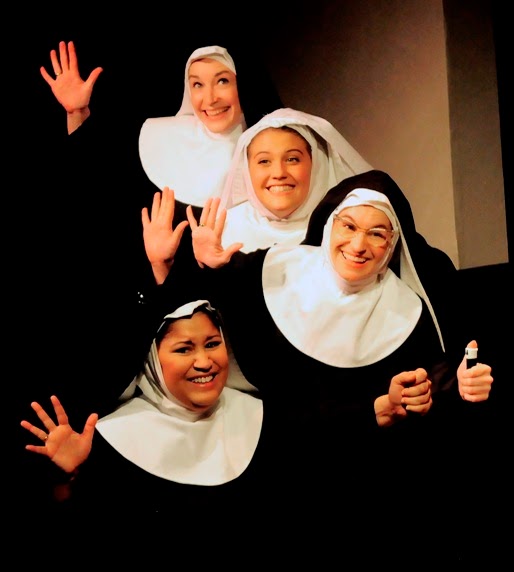 Dan Goggin apparently enjoyed his Catholic school upbringing so much that he decided to honor those wacky nuns of whom he was so fond. He penned a cabaret show called “The Nunsense Story,” which opened for a four-day run and was so popular it was extended to 38 weeks.

Encouraged, he expanded his original concept into a full-length comedy called “Nunsense,” which opened off-Broadway and ran for an unbelievable 10 years, the second-longest running off-Broadway show (after “The Fantasticks”). By the time it ended its run, it had been translated into 26 different languages and had seen more than 8,000 productions worldwide. It has even spawned five different sequels.

To celebrate the 30th anniversary of this show, the Sacramento Theater Company is bringing it back to the Pollock Stage.

The story involves the Little Sisters of Hoboken — who once worked in a leper colony in the south of France — who are now living in New Jersey, after having been ousted by Protestant missionaries.

While several of the sisters were out playing bingo with a bunch of Maryknolls, their cook, Sister Julia, Child of God, accidentally poisons 52 of the nuns with her tainted vichyssoise. The remaining sisters managed to bury all but four of the departed when they ran out of money and discovered that the Mother Superior took some of the funds raised to buy a flat-screen TV. So the four remaining are being kept in the freezer (“blue nuns,” you might say) and the health department is beating at their door.

They have decided to put on a show to raise the rest of the money so they can finally bury their fellow sisters … and thus is the set-up for the rest of the show. In a somewhat strange explanation, the nuns feel their frozen sisters can’t get to heaven until their bodies are buried … which isn’t what I learned in Catholic school, but let it pass — it’s a plot device.

While the material may be somewhat dated and the jokes real groaners, this two-hour farce kept the audience in stitches and praise was heaped on the show as people left the theater, so it’s obviously a humor that people still enjoy.

Heading the nuns is the marvelous Lucinda Hitchcock Cone, an STC favorite. Her Sister Mary Regina is strongly in command, except for that little episode at the end of Act 1 which gives the perpetual understudy, Sister Robert Ann (Gina Coyle), her moment in the spotlight as she reminisces about what it was for her “Growing up Catholic.” It is a beautiful and poignant song about changes in the Catholic Church, which Coyle delivers beautifully.

Miranda D. Lawson is the Sister Mary Hubert, Mistress of Novices, the second-in-command who, in previous productions of this show that I have seen, has delusions of grandeur and desperately wants to be No. 1, though in this production the two women seem to have a good relationship. Hubert’s “Holier than Thou” is the show-stopper of the evening.

Kiki Burns and Bella Coppola are double-cast as Sister Mary Leo, the novice. Burns played the role on opening night. She is very sweet and wants to be the first ballerina nun. I’m not sure what the Little Sisters of Hoboken are doing with a Daughter of Charity cornette, but Mary Leo dons the headpiece and dances for all the world like The Flying Nun.

Rounding out the gang of five is Sister Amnesia (Amanda Goldrick), who can’t remember who she is but who ultimately comes up with the solution for the burial of the blue nuns just in the nick of time.

Some of the material is mildly offensive (I didn’t like the song about the leper colony) but there is no denying that the audience loved it.
Posted by Bev Sykes at 12:39 AM