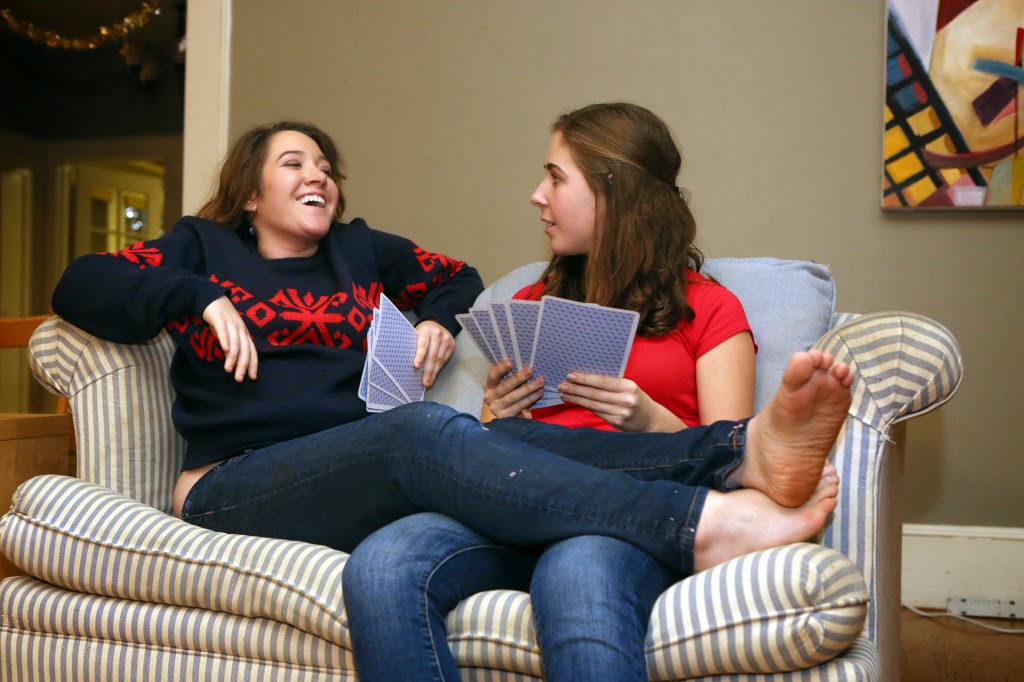 Acme Theatre Company has never shied away from controversial material, and with its production of “Stop Kiss” by Diana Son, directed by Betsy Raymond, the company has done it again.

Raymond explains that the play is a 360-degree love story, “one that plops us down in the middle of the action and invites us to explore in all directions. This play jumps backward and forward in time within a period of months, pivoting around a kiss and an assault, both of which challenge Callie and Sara’s lives.”
We watch the relationship between Callie (Danielle Schlenker) and Sara (Eden Tomich) develop from acquaintance to friendship to something deeper. It is a story told with sensitivity and one that anyone who has ever fallen in love can identify with.

Schlenker and Tomich give polished, adult performances through which we understand their growing affection for one another and feel heartbreak at the gay bashing that changes the lives of both forever.
Callie is a traffic reporter for a New York TV news station. She rides around in a helicopter and confesses that she isn’t really a journalist. She lives in a spacious, if perpetually messy, apartment.

One of her good friends is George (William Forkin), a former boyfriend to whom she often turns for a meal, a date, words of comfort or for casual, friendly sex.

Into her life steps Sara, whose cat Callie has agreed to board. Sara is an elementary school teacher from St. Louis who is new to the city and eager to be shown around. She left her family and former boyfriend back in Missouri to take a job in the Bronx. She is focused and loves a challenge. She is Callie’s exact opposite.
The women quickly become friends, a friendship that gradually morphs into a different kind of attraction. Schlenker and Tomich handle the relationship adroitly as we watch the approach/avoidance as both are feeling attracted, but both afraid to voice (or act upon) their feelings. The sexual tension comes in the form of gestures started, but not completed, meaningful looks, statements started, but not finished.

The deepening rapport between these women is touchingly restrained. Their faces during a sleepover date when Sara asks Callie to share the couch bed with her in hopes of luring the cat out of hiding convey their feelings clearly.

Callie finally decides to confess her feelings while the women are walking alone in a park at 4 a.m. and gives Sara a kiss. Rather than being a “happily ever after” kiss, as it would have been in normal romance, the kiss turns into a nightmare for the women, and displays the ugliness of violence as well as the tenderness and joy of a first kiss.

This play was written in 1998, and while it has a fresh feeling that is sadly relevant to today, there are things that make it feel dated. As Callie is giving her statement to the police detective (Andres de Loera-Brust), the detective is looking for the salacious, and seems to be blaming the women for provoking the attack. I would hope that this insensitivity would not be the case in a city like New York today.

DeLoera-Brust gives a good performance as someone who is trying to be sympathetic while at the same time barely hiding his own prejudices about the situation.

(There is also a scene where Sara is taking vinyl records from a bag and discussing them, which is not relevant to the plot, but which is somewhat jarring in this digital music era.)

Forkin, as Callie’s casual boyfriend, and Ricky Houck, as Sara’s ex-boyfriend, give restrained performances as the confused men who are trying to wrap their heads around the relationship between their former girlfriends. (Forkin has some wonderful lines, i.e., when he hears that Sara won her two-year teaching job in the Bronx by placing first in a contest in St. Louis, he asks, “What did the loser get in this contest?”)

Also in the cast, giving fine performances, are Tina Simson as Mrs. Winsley, witness to the attack, and Eliza Buchanan as the sensitive nurse who cares for Sara. She is the only person who really understands the feelings between the women and gives Callie the opportunity to be more open about her emotions.

Before seeing this play, I wondered about its relevance to such a progressive community as Davis and whether it was as important to be performed here as, perhaps somewhere in the Midwest. However, during the question-and-answer session following the show (there is one after each performance), I realized that maybe we aren’t quite as enlightened a community as I thought we were.

While no one was judgmental of the two female characters, some of the questions seemed to rise out of an unawareness of the level of hatred against the gay community, and perhaps this play is one way of raising the awareness to different levels.

Congratulations to all involved in the presentation of this important work.
Posted by Bev Sykes at 4:08 PM