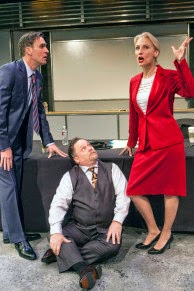 When Aaron Loeb’s “Ideation” premiered at the San Francisco Playhouse in 2013, critics called it everything from “a demonically dark comedy” to a “psychological thrill ride,” a “taut locked-room mystery,” a “gripping satire” and both a “corporate farce” and a “corporate thriller.”
Capital Stage’s production, adroitly directed by Michael Stevenson, proves that this very funny play is indeed all that.

Loeb, senior vice president of Kabam, a free-to-play video game company in San Francisco, writes plays as his second profession and has earned seven Emerging Playwright Awards. He explained that his video gaming experience, combined with his wife’s work as an international human-rights lawyer at San Francisco’s Center for Justice and Accountability, is the inspiration for this Glickman Award winner for Best New Play of 2014.

It is difficult to talk of the specifics of the plot, since they are better revealed in their own time, but the setting is a generic corporate office, with set design by Jonathan Williams, featuring a conference room table designed and built by Marc Foster.

As the show begins, Hannah (Carrie Paff) in her red power suit, is setting up for an important meeting that is about to take place. While it is obvious that Hannah is the brains of the group about to discuss a thorny corporate problem, she is “just” a woman and has to play her cards very carefully.

She first butts heads with Scooter (Russell Dow), an office boy hired because he is the son of one of the corporation’s board members. Scooter believes the work for which he was hired is beneath him and wants to be part of the serious discussion, leaving Hannah with the problem of how to handle this upstart who has no respect for her authority.

The trio of Brock (Jason Kuykendall), Ted (Peter Mohrmann) and Sandeep (Jimmy Sidhu) arrive, fresh from a trip to Crete, in high spirits, laughing and high-fiving about the complicated deal they have signed that will make the stockbrokers rich while causing financial difficulties for Greece. Laughter and good-ol’-boy hilarity ensues.

The dialogue comes fast and furious, and don’t try to figure out what is going on — it may be irrelevant at this point. The beauty of Loeb’s script is how he crafts the action to slowly build tension. Just when you are horrified at what you are hearing, a new element is added and the picture changes completely, and then the paranoia begins and the story evolves even more.

This play needs skillful hands to make it work, and in this cast, Stevenson has that in spades. Kuykendall’s Brock is a Don Draper-like alpha male, arrogant, sure of himself and a take-charge guy. His subtle body language changes throughout the play are brilliant.

Mohrmann is at his finest as the blustery Ted who is the numbers guy, who wants to get on with the discussion so he can get out of the room and make it to his daughter’s soccer game in time. By the same token, he realizes the enormity of the ethically ambiguous project they are tasked to design; his thoughts about it ultimately change everything.

Sidhu is the Indian Sandeep, here on a work visa, who is committed to seeing the project through to completion, though he is having second thoughts and realizing that to disagree with his colleagues risks his legal standing in the country.

Patrick Murphy is the disembodied voice of “J.D.,” the CEO who has demanded a completed project plan in 90 minutes and puts additional pressure on the committee members, all of whom are obviously terrified of incurring J.D.’s displeasure.

“Ideation” challenges the audience to weigh their moral values against global responsibility. Do the needs of the many outweigh the desires of the few — and whom can we really trust when we are making these decisions?

This is a top-notch production of a play that makes you laugh, cringe and question all at once.
Posted by Bev Sykes at 4:05 PM