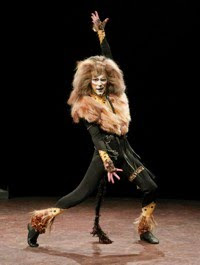 The Music Circus is closing its 2009 season with Andrew Lloyd Webber's 'Cats,' the show that opened the company's then-brand-new Wells Fargo Pavilion in 2003.

'Cats' isn't my favorite Lloyd Webber show, by a long shot. And, based on comments I heard during intermission - 'I'm just not getting this one!' - and the number of people who didn't return for Act 2, I'm not alone.

But the task at hand is not to review a show that has been around for a couple of decades, but this particular Music Circus production.

'Cats' was inspired by 'Old Possum's Book of Practical Cats,' T.S. Eliot's 1939 collection of children's poems. The play's plot is thin, and used primarily as a vehicle for introducing new cats and new musical numbers. That said, the music is engaging, and the cats are delightful.

The one problem with doing 'Cats' in the round is that a big part of the show's charm - at other venues - is its massive set, which depicts the back alley location of the piece. On a proscenium stage, one can have heaps of garbage and things attached to the walls; at some theaters, audience members are allowed to walk around on stage to examine the scenery.

Music Circus scenic designer Michael Schweikardt does a good job of suggesting a back alley, with a few props lining the edge of the stage, but compromises were necessary to keep the sight lines.

When we lose the impact of the scenery, 'all' that remains is the singing and dancing. Thankfully, this cast makes any yearning for a more massive set transitory. Director/choreography Richard Stafford has assembled an exciting and impressive cast, headed by Ken Page as Old Deuteronomy.

Page created the role on Broadway and reprised it 18 years later in the 2003 production. Much like his character, Page obviously has many lives.

Jacquelyn Piro Donovan is notable as Grizabella, the moth-eaten former glamour cat, who hopes to be chosen for rebirth in the 'Heaviside Layer.' Donovan also played this role in the 2003 Music Circus production. Her delivery of 'Memory' is hauntingly beautiful, and it drew cheers and sustained applause from the audience.

Kurt Domoney's crisp interpretation of Skimbleshanks, the cat on the railway train, is a delight.

Stafford's choreography is perfect, particularly in numbers such as 'The Jellical Ball.' (This production also gives patrons the opportunity to see a chorus of tap-dancing cockroaches!)

The vocals also afford some beautiful moments, such as the chorus for 'Old Deuteronomy.'

Costumes are a huge part of this show's success, and Marcy Froehlich's efforts are outstanding. The solution for the 'larger' cats is ingenious, and Froehlich's costumes for a band of Siamese pirates are quite colorful.

(The cats are so realistic that I felt it necessary to come home and apologize to my dogs, for fraternizing with the opposite species.)

Act 2 is more enjoyable than Act 1, as it gives up all pretense of any plot whatsoever, and simply presents several stand-alone numbers, each introducing a different cat.

All things considered, 'Cats' is a good end to a good season.
Posted by Bev Sykes at 1:51 PM 1 comment: 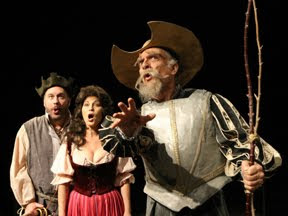 The Music Circus production of 'Man of La Mancha,' which continues through Sunday, is proof that you can tell a musical story without glitz or glamor: with nothing more than a solid script, a fantastic cast and a terrific orchestra.

This play-within-a-play - based on the 17th century Spanish novel by Miguel de Cervantes, with book by Dale Wasserman, music by Mitch Leigh and lyrics by Joe Darion - begins as Cervantes, imprisoned for crimes against the Catholic Church (he attempted to foreclose on a monastery, for nonpayment of taxes), awaits interrogation by the Spanish Inquisition.

The dual roles of Cervantes and Don Quixote are played brilliantly by Walter Charles, a veteran of Broadway, Off-Broadway and regional theater. Charles is that rare actor who knows that sometimes less is more; his toned-down handling of the 'story telling' parts of the narrative are balanced nicely by his 'acting' in the role of Don Quixote.

Kevin Ligon is a delight as the manservant, Sancho Panza. Ligon has a marvelously acerbic method of delivery, and is especially winsome in his song, 'A Little Gossip.'

Cervantes' fellow prisoners hold their own inquisition - a mock trial - during which they accuse the writer of being, among other things, an idealist and a bad poet. If 'convicted,' Cervantes will lose his belongings, which consist primarily of a trunk of theatrical costumes and props, and an unfinished manuscript.

By way of a defense, the author proposes to act out the story of the manuscript, using other prisoners to fill in the roles.

This, then, is the saga of Alonso Quijana, an idealistic old man who imagines himself to be an errant knight, Don Quixote de La Mancha, who travels around the countryside fighting beasts and rescuing damsels in distress:

'He ponders the problem of how to make better a world where evil brings profit and virtue none at all; where fraud and deceit are mingled with truth and sincerity.'

The delusional Quijana, who promises not to allow wickedness to flourish, is an embarrassment to his respectable family.

Quixote sees things as he wants to see them, not as they really are. A windmill thus becomes a giant beast to be attacked; a country inn becomes a castle; the serving wench and town whore, Aldonza, becomes the lovely 'Dulcinea,' a fair lady whom Quixote insists on treating with dignity, gentleness and respect, as he becomes her protector.

Valerie Perri doesn't have the vocal richness that one would like in a Dulcinea, but she can belt a tune with the best of them. Her raw portrayal of 'Aldonza, the whore' is very affecting. In deference to the PG audience at any Music Circus production, Aldonza's rape scene is toned down to a suggestive dance, choreographed by Bob Richard, rather than a more graphic attack.

P.I. Brown also turns in a powerful performance, as the 'governor' among the prisoners, and the Innkeeper in Cervantes' play. The latter grants Quixote his knighthood, and gives him the title of 'Knight of the Woeful Countenance.' Brown is an overwhelming presence with a deep bass voice.

The play offers wonderful technical moments throughout. Quixote and Sancho set out on their quest in 'chariots,' which are pieces of furniture found in the jail, pulled by a 'horse' and 'donkey' (Alex Robert Holmes and John B. Williford). The scene brings cheers from the audience, as director Guy Stroman has found the perfect way to move his four-legged creatures around the stage.

A later scene, 'We're Only Thinking of Him,' features Quijana's family and advisers: It's an outstanding lighting effect, with each standing in a pool of light as these characters rotate around the stage. Kudos to designer Pamila Z. Gray.

At one point, a group of Moorish gypsies sets upon Quixote and steals all his belongings, including his animals. Manoly Farrell plays a seductive dancer, distracting the hapless knight while her companions rob him blind.

Quixote maintains his idealism even in the face of these many adversities, until he is forced to look in the mirror and see life as it actually is.

The message of this musical is contained within its signature song, 'The Impossible Dream': One must neither give up one's dreams, nor the hopes that nobility always triumphs, and virtue always prevails.
Posted by Bev Sykes at 1:42 PM No comments: 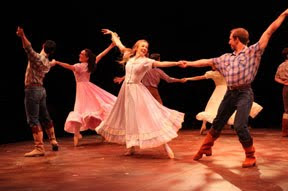 They're dancing up a storm at the Wells Fargo Pavilion this week.

A rollicking production of 'Seven Brides for Seven Brothers,' choreographed by Pepper Clyde and directed by Leland Ball, returns to the Music Circus after a three-year hiatus. Ball now has directed this play three times for Music Circus, and Clyde has choreographed all previous productions for the venue.

Based on 'The Sobbin' Women,' a 1928 short story by Stephen Vincent Benet, the musical began its life as an MGM musical starring Jane Powell and Howard Keel, with music by Gene dePaul and lyrics by Johnny Mercer. It was hugely popular. A subsequent stage version - directed by Lawrence Kasha, with Powell and Keel reprising their roles - was less successful.

But an improved version - with additional songs (music and lyrics by Al Kasha and Joel Hirschhorn) - had a brief run on Broadway in 1982, and has found new life in theaters such as Music Circus, where it is a big favorite.

The story actually had its origins with an eighth century legend of the founding of Rome and the realization by Romulus, its first king, that since his followers were mostly male, they needed some women to ensure the city's survival. As a result, they raided the nearby Sabine tribe and carried off some virgins.

It's a thin plot on which to build an entire musical, but a meaty plot line is irrelevant when gifted with such lively dancing.

The current incarnation of the story is set in the Oregon wilderness. The seven Pontipee brothers realize that if they had a woman around the ranch, she could cook, clean and keep the place tidy. Since they've been unsuccessful at keeping a housekeeper, the brothers decide that one of them should find a woman to marry.

Adam (Joseph Mahowald), the eldest, is elected to go to town and return with a wife, along with various other supplies that are required.

Once in town, Adam finds Milly (Jacquelyn Piro Donovan), a feisty waitress in a local eatery. What Adam lacks in romantic ability he makes up for in persuasion, and Milly agrees to marry him that day, and return to his wilderness cabin.

She is, however, unaware that marriage to Adam also comes with six unruly brothers.

Mahowald and Donovan are a likable couple, with the latter having the raw voice of, say, an Annie Oakley, as she gradually tames the mountain men and insists on their civilized behavior. But she also demonstrates a lyrical tone in songs such as 'Wonderful Day' or 'Goin' Courtin,' ' as she teaches the younger brothers how to woo a woman.

The most famous scene from the film is the 'Social Dance,' where the Pontipee brothers begin to win the women away from other townsmen at the monthly town social. This sequence also is a high point in this Music Circus production, although the incident ends in a fight between the Pontipee brothers and all the other men.

The sad result: The Pontipee brothers are banned from the community.

Lovesick and lonely, and with Adam's urging, they sneak back to town at night and kidnap their would-be brides. An avalanche closes the only road to the Pontipees' spread, preventing the townsfolk from rescuing the kidnapped women, who are forced to wait out the winter with the men.

But there's no hanky-panky going on, as Milly tosses the men out of the house and into the barn. She and the woman live in the house until the spring thaw, when love also begins to blossom among all the couples.

The women aren't quite as athletic, but that in no way minimizes the contributions of Merrill West, Miki Berg, Elisa Nixon, Robin Masella, Tiffany Sudol and Kristen J. Smith. They're all excellent.

This lively, upbeat production of 'Seven Brides for Seven Brothers' will set your toes a-tapping.
Posted by Bev Sykes at 2:38 PM No comments: