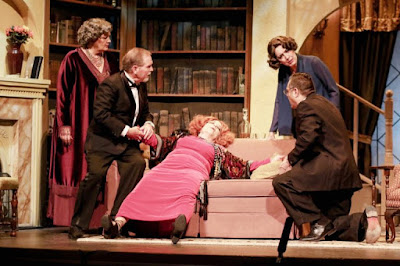 Anyone who has enjoyed the many performances of Lenore Sebastian over the years will want to be sure to get tickets to see her as Madame Arcati in the Woodland Opera House production of Noel Coward’s ghostly comedy, “Blithe Spirit.” It may be one of her best performances.

Thanks to direction by Robert Cooner, costuming by Denise Miles and Sebastian’s magnificent inhabiting of the character, she has brought the eccentric medium to life delightfully.

Madame Arcati is brought to the home of Charles (Matthew Abergel) and Ruth (Patricia Glass) Condomine, to perform a seance for them and their guests Dr. and Mrs. Bradman (Steve Mackay and Christine Deamer). Charles, a writer, needs material for a book he is writing about professional charlatans. All four think the seance will be great fun and laugh at the antics and gestures of Arcati.
All is great fun until Arcati somehow conjures up the spirit of Charles’ first wife, Elvira (Analise Langford-Clark), visible only to Charles.

Charles has a difficult time convincing his current wife, who thinks he just had too much to drink, until he finds a way to prove to her that Elvira is really there — he convinces her to move a few objects.

Arcati has to admit she doesn’t know how to send Elvira back to the other side, and Elvira is having a lovely time back in her old house, taunting Ruth, who can’t see her but realizes that she really is there.

What to do with two women you love, but who hate each other, both inhabiting the same house, only one of whom is actually living?

Abergel makes Charles a not-so-lovable egotistical novelist who is rather enjoying having both of his wives around. As the play continues, he becomes irritated with them both, but you can see he is enjoying the game.

Glass, as Ruth, while obviously in love with her husband, also has hen-pecked him. She is more interested in appearances and showing off her perfect home (great design by Don Zastoupil), serving the perfect martini and making fun of Madame Arcati.

A victim of Ruth’s need for perfection is the maid Edith (Rachel Tauner, last seen as Anne Frank in last year’s “Diary of Anne Frank.”), who is overwhelmed by her boss’ demands but can’t run to keep up because that bothers Ruth, too.

Deamer is what everyone might think of as an uppercrust British “dame,” (that’s a as in “ahh” not “ay”) but sadly, much of her dialog is lost in the very, very British accent. A little less accent would be oh-so-much better. One misses her half of some very witty conversation with Ruth.

Mackay has no such accent problem and is the solid doctor who takes charge when Arcati collapses during the seance.

There is a lot of humor in this classic play, but it also has a sting to it, as it examines the difficulties within a marriage and what causes the disintegration of both of Charles’ marriages.

All in all, this is an excellent play by the Woodland Opera House, which is worth seeing on its own — but especially to watch Sebastian’s performance.
Posted by Bev Sykes at 11:55 AM No comments:

The Diary of Anne Frank

When Anne Frank, a young Jewish girl in Amsterdam, received a diary on her 13th birthday, she dreamed of one day becoming a writer.

Given that her famous diary has been translated into more than 70 languages, published in more than 60 countries and sold more than 35 million copies, her dream was achieved beyond her wildest expectations! Her diary appears on lists of the bestselling books of all times.

A play, dramatized by Frances Goodrich and Albert Hackett, opened on Broadway in 1955, ran 717 performances and won several Tony Awards, including one for Best Play.

Now, to celebrate the 75th anniversary of Anne’s receipt of the diary, the Sacramento Theatre Company is presenting an outstanding version of the story of eight Jewish people hiding in a secluded room for more than two years during the Nazi occupation of the Netherlands.

The production, directed by Casey McClellan, boasts a stellar cast, starting with Olivia Ingram as Anne (she shares this role with Maddy Wood). Ingram is perfect as the irrepressible young girl whose spirit cannot be dampened despite the circumstances of their claustrophobic incarceration.

During her time in the room, she works through problems with her mother, a first love and irritation with the other occupants, but keeps her positive attitude: “I don’t think of all the misery but of the beauty that still remains,” and “I still believe, in spite of everything, that people are really good at heart.”

Michael Jenkinson is Anne’s father, Otto Frank, whose job it is to keep the peace among the disparate group forced to live together.

Mrs. Frank (Dale Lisa Flint) struggles with her relationship with Anne, and she is in charge of keeping the room running smoothly.

Otto’s business partner, Mr. van Daan (Eric Wheeler), joins the Franks with his wife (Natasha Hause) and son Peter (Nick Leras, sharing the role with Owen Larson). Mr. van Daan is perpetually hungry and tends to steal the small amounts of food the group has. His wife’s dearest possession is her fur coat, which she eventually must sell.

Peter is painfully shy to begin with and spends most of his time in his room with his cat (who must be the best cat in the world, since he lives in a small bucket without complaint!).

A late addition to the room is the dentist, Mr. Dussell (STC favorite Gary Martinez), arriving to spend a day or two, but staying for the duration. Dussell is persnickety and acerbic, allergic to the cat and resentful of having to share a room with Anne. Martinez is reminiscent of Leo G. Carroll.

Frank’s employee, Miep Gies (Kirsten Myers), and Mr. Kraler (William Oberholtzer) keep the secret identities hidden and bring supplies and news of the outside to the group weekly.

While this is a dark, depressing story, it is not without its lighter moments. There is a lovely Hanukkah celebration, where Anne reveals that she has made gifts for everyone, and the joy at hearing of the invasion of Normandy, which brings promise that their incarceration soon may be over.
But in the close quarters, nerves fray and little irritations take on greater significance, and though the audience knows how the story ends, the discovery of the hidden room by the Nazi soldiers is still heart-rending.

Anne died of typhus at Bergen-Belsen concentration camp, but because Miep Gies saved her writings, Anne’s father, the only survivor of the group, was able to put her diary into shape to be published.

Anne’s message resonates with all of us today, as we look at all the problems we see around us: “How wonderful it is that nobody need wait a single moment before starting to improve the world.”
Posted by Bev Sykes at 8:17 AM No comments: