The laughter was so continuous at the opening night of Sacramento Theatre Company’s “Disaster!” that it was sometimes difficult to hear the dialogue. But that didn’t matter because the plot is more or less negligible to the zany nonsense going on on stage.

This jukebox musical, written by Seth Rudetsky and Jack Plotnick (with additional material by Drew Garaci), uses 27 popular songs of the ’70s like “I Am Woman,” “Feelings,” and “I Will Survive,” played by the five-piece onstage orchestra, to move the action forward — action that never stops, thanks to the nimble hands of director Michael Laun.

This is a parody of those silly ’70s disaster movies like “Poseidon Adventure,” “Jaws” and “Towering Inferno.” The setting is the opening of a new floating casino, and the first act pretty much introduces us to the players (a cast of 20 first-rate actors) who will be trying to escape the casino when disaster strikes in Act 2.

Tony (Tim Stewart), whose baby this casino is, has built it Trump-like, ignoring rules and regulations and taking shortcuts wherever possible. Professor Ted Scheider (Casey McClellan) is the disaster expert who knows what is going to happen but can’t get anybody to believe him. They’re all having too good of a time.

New York Times reporter Marianne (Melissa Brausch) is trying to write an article about Tony’s cost-cutting measures, which have made the casino unsafe.

Because there has to be a love story in there, Marianne runs into former lover Chad (Sam C. Jones) and the two rediscover their “Feelings” for each other, which may lead to their peril.

Lounge singer Jackie (Natasha Hause) is waiting for philandering Tony to pop the question. She has two children, Lisa and Ben, both played by Elizabeth Lamora (alternating with Kateyn Reeves), who proves that you can play two characters on stage at the same time if you stage it right!

The guests are great, particularly Nicole Sterling as Sister Mary Downy, a nun with a previous gambling addiction, trying to resist the lure of the slot machines as she attempts to let people know that if they gamble, they will go to hell. Her “Never Can Say Goodbye” is a highlight.

Maury and Shirley (Michael Cross and Jamie Jones) are a retired couple, celebrating Maury’s retirement (“You’re Still the One”). Shirley is a salute to Shirley Winters’ character in “Poseidon Adventure,” who ends up saving the young lovers. Winters’ character called on her swimming skills; this Shirley resurrects her skills as a former high school tap-dancing champion to tap out the morse code instructions to open a watertight door.

Miranda D. Lawson is Levora, a disco diva, who, in songs such as “Theme from Mahagony” and “Knock on Wood,” shows that she’s not quite ready for retirement yet.

Kudos to scenic designers Jarrod Bodensteiner and Renee Degarmo for creating realistic earthquakes and flooding, with the aid of Emma Bramble’s sound design and Craig Vincent’s lighting design.
If you like to laugh, and especially if you were a fan of either ’70s pop music or those crazy disaster films, this is the show for you!
Posted by Bev Sykes at 12:16 PM No comments: 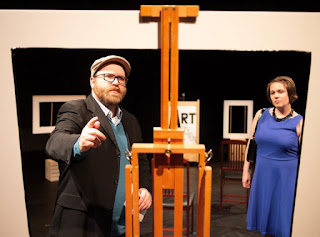 Happy Hour Theatre is off to a terrific start. I can hardly wait to see what they come up with next.
Posted by Bev Sykes at 3:42 PM No comments: