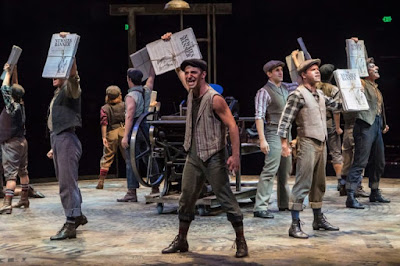 Who says that one young, insignificant poor kid living in the slums can’t change history?
That’s the story, based on true events, which is the subject of the Broadway at Music Circus current production, Disney’s “Newsies.”

In 1992, the story was made into a Disney movie, and in 2014 an award-winning musical with music by Alan Menken, lyrics by Jack Feldman, and book by Harvey Fierstein. It is now a premier for Broadway at Music Circus.

Entering the Wells Fargo Pavilion is like walking into a Brooklyn tenement, with apartments over each doorway, all joined together in a spiderweb of clothes lines, each with laundry hanging from them.

“Kid Blink” (decidedly not the best name for the hero of this tale) is now Jack Kelly (Joey Barreiro), an older teen (so he can have a love interest), but the basics of the story are still there.

For “heart” there is “Crutchie” (Blake Stadnik), who has been crippled and walks with a crutch and is a perfect victim for the goons of the publishers trying to squelch the boys.

There is a love interest, Katherine (Laurie Veldheer), a reporter trying to make it in a male-dominated world, and hiding a surprising secret.

There is Davey (John Krause) and his little brother Les (Josh Davis) who, unlike the others, have a home and parents, but who join the others in selling the papers and protesting the fee increase.

But this show belongs to the newsies themselves (if you look closely you can see Davis High’s Jimin Moon). The dancing is amazing and you do get the feel of their camaraderie as well as their desperation.

Paul Schoeffler is powerful as Joseph Pulitzer, who only cares about money and doesn’t have a bit of compassion for the kids (gee … where have we heard that lately?).

Music Circus’ ubiquitous Ron Wisniski has a short but outstanding appearance as a bombastic Teddy Roosevelt (then governor of New York), which earned him well-deserved applause as he left the stage.


The high-energy physicality and enthusiasm of the cast make this an engaging production — and of course the David vs. Goliath struggle is always good to keep an audience entertained! 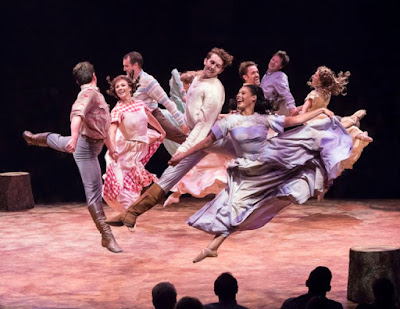 Broadway At Music Circus is presenting a lively production of the 1954 Jane Powell/Howard Keel musical. While it is short on story, its strength is in the powerful dance numbers, of which there are many. The production’s book is by Lawrence Kasha and David Landay, music by Gene de Paul, lyrics by Johnny Mercer and new songs by Al Kasha and Joel Hirschhorn.

There is little “plot” in this adaptation of the 1954 MGM musical. Seven brothers, the Pontipees — mountain men living in the Oregon wilderness — realize that if they had a woman around the place, she could cook and clean for them and keep the place tidy.

Since they’ve been unsuccessful in keeping a housekeeper, it is decided that one of them should find a woman to marry. It falls to Adam, the eldest, to go to town and bring back a wife, along with the other supplies he needs to pick up.

Edward Watts is an imposing Adam with a strong baritone giving a lusty performance.

Adam goes to town and finds Milly (Paige Faure), a fiesty waitress in a local eatery, who is tired of the pressure of serving food to demanding men all day long. What Adam lacks in wooing ability he makes up for in persuasion and Milly agrees to marry him that day and return with him to his wilderness cabin. (Adam just kinda forgot to mention the six brothers who share his home!)

Milly begins to civilize the brothers to the point where they are ready to get their own brides. However, after an altercation at a local dance hall, the brothers are banned from the town,
Lovesick and lonely, and with Adam’s urging, they sneak back to town at night and kidnap their would-be brides. An avalanche closes off the only road to the Pontipees’ spread, preventing the townsfolk from rescuing the kidnaped women, who are forced to wait out the winter with the men, though Milly runs a tight ship and makes sure that no hanky panky goes on until a preacher can come and marry them.

The production is directed by Glenn Casale and choreographed by Patti Colombo, whose numbers are so lively as to leave the audience breathless. “Social Dance,” where the Pontipee brothers begin to win the women away from the townsmen at the monthly town social, needs to be seen to be really appreciated. It stopped the show as the audience could not stop applauding.

The dance numbers were vigorously athletic and made this a daring, dazzling choreographic extravaganza.

This is another winner for the second Music Circus offering.
Posted by Bev Sykes at 4:57 PM No comments: