It's a Wonderful Life

“It’s a Wonderful Life” has been a favorite ever since it appeared on our movie screens in 1946.  The Winters Theatre company presented a production in 2010 and are reprising the show, though a different version, this one by Philip Grecian. Again, Anita Ahuja directs.

There are many, many scenes and the lengthy set changes make the first act, especially, drag somewhat.  There were also some first night problems with telephones that didn’t ring when they should and did ring when they should not and a few other glitches, which I know will be smoothed out as the run progresses, but all in all, Winters has given a loving tribute to this beloved holiday classic.

Scott Graf dominates as Clarence Oddbody, the angel who has been trying for 200 years to earn his wings.  He has his chance when God sends him to earth to help George Bailey (Scott Taylor), who has reached a crisis and has decided to kill himself.

Taylor gives a fine performance as George, with all the wide eyed enthusiasm of a young man, and the weight of the world as his world falls apart.  His chemistry with Mary (Cameron Toney) is lovely.  She is the steadfast wife who supports him no matter what (Young Mary is played by Isadora Harris)

Act 1 is a backward look at George’s life, with Kenneth Matheson playing the young George saving his brother Harry (Arlo Harris) from being drowned and preventing the local pharmacist (Jesse Akers) from sending the wrong medication to a patient.

George has great plans for his future–traveling the world and then settling down to become an architect.  But plans go awry when his father dies suddenly and it is up to George to take over the Savings & Loan and keep it from being taken over by the wicked Mr. Potter (Trent Beeby, who played George in the 2010 production).

Beeby is wonderful as the man you love to hate.  People sometimes think stories like this are dated, but some of Potter’s lines could be right out of today’s headlines.

Uncle Billy, who loses $8,000 and plunges the Savaings and Loan into the brink of bankruptcy is played wonderfully by Bryan Pro who gives Billy more "smarts" than some actors, but is devastated by his loss.

“Sesame Street” swears that the Muppet characters of Ernie and Bert are not taken from this story, but William Haggerty (Bert) and Jim Hewlett (Ernie) are fun as these two characters.  Hewlett appears later as a bartender.

Cody Svozil does double duty as Mr Potter’s slimy-haired body guard and “enforcer,” and also as George’s enthusiastic brother, who just received the Congressional Medal of Honor for his heroism in battle.

Alexis Velasquez is very funny as Aunt Tilly, secretary of the Savings and Loan, who answers the phone in the best Lily Tomlin imitation.

George’s children are Rachel Rominger as Janie, Jackson Bronson as Peter, Arlo Harris as Tommy and Stella Gonalez as Zuzu, who announced that whenever a bell rings, an angel gets his wings.

Because of the number of locations, sets are necessarily pretty utilitarian, but designer Gary Schroeder manages to make the most of minimal set pieces.  Particularly impressive, though simple, is the bridge on which George wants to commit suicide.

I never leave Winters productions without a smile on my face because of how much fun everyone is having, both on and off the stage. 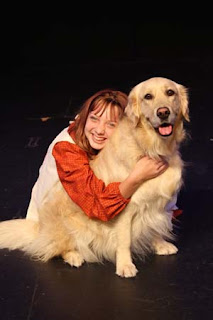 “Annie” is one of those classic musicals that seems to come around so often that I groan at the thought of seeing it again. But then I go to the theater and remember why I really like this retelling of the Little Orphan Annie story, and why it is so popular, especially when done with the enthusiasm and talent of Davis Musical Theatre Company.

This latest production, directed by Steve Isaacson, with choreography by Ron Cisneros, has a wonderful, talented cast.

This show really rises or falls on the talents of Annie and in Katarina Detrick (in her first lead role) DMTC has a winner. She sometimes tends to be shrill, but she is a belter of the first order, and they probably can hear her out in the parking lot when she sings “Tomorrow.” She also is a good actress and professionally handles the dog Sandy (Cleopatra Graves) who is more interested in running into the audience, with tail wagging, than behaving herself on stage, despite the treats Annie kept in her pocket. Detrick never missed a beat and eventually got the dog under control.

Perhaps the moment that most impressed me was when billionaire Oliver Warbucks (Gannon Styles) is letting Annie know how she has wormed her way into his heart. The intense look of real love on her face as she watches him was just beautiful to behold.

Styles, with a solid theater background, is new to DMTC and what an addition he is. He gives great warmth to the character of Warbucks and has a great voice to boot.

Warbucks’ secretary, Grace Farrell, played by Chris Cay Stewart, is a warmhearted woman hiding feelings for Warbucks, and a great friend to Annie. Stewart also appears as part of the ensemble in some scenes, where her beautiful voice is easy to identify.

Rachel Hoover, a Davis native who performed more than 30 shows before she went to college (including some with the former Sunshine Children’s Theater), is a spectacular Miss Hannigan, the harridan who runs the orphanage where Annie was dropped off 11 years ago as an infant. She’s enough to scare anybody, and her musical numbers, particularly “Little Girls,” are outstanding.
Christopher Murphy, another DMTC newcomer, makes an impression as her brother, Rooster Hannigan, as does Bridget Styles as his girlfriend Lily St. Regis.

The orphans — Kiera Chang, Chantelle Holt, Vivian Li, Lexy Hutcheon, Sage Sigmon and Katherine Berdovskiy — are well- rehearsed, in good voice and perform their dances professionally. Each girl also has her moment to shine in the spotlight.

What I love about DMTC shows are the little unexpected “gems.” I found three under that category in this production. Amaralyn Ewey is great as the fresh-faced star-to-be, newly arrived in New York. There never was a better role for Marc Valdez than that of Franklin D. Roosevelt. But especially outstanding was Jan Isaacson’s performance as the silent sound man for a Gert Healy (Amy Woodman) radio broadcast. She is just perfect.

With familiar tunes like “Easy Street” and “Tomorrow,” in addition to a score of other fun songs and a cast of adorable little girls and funny bad guys, this is a show that will appeal to everyone, and DMTC makes it fun for all ages.
Posted by Bev Sykes at 12:41 PM No comments: