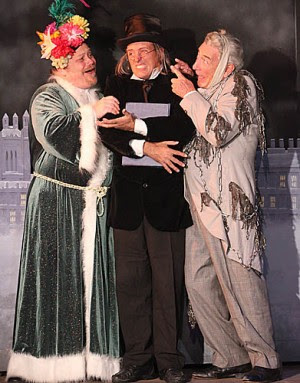 I have a guilty secret. A critic reviews many Christmas-themed shows at this time of year, but I have to admit that my favorite is “Every Christmas Story Ever Told (and then some),” the holiday offering at Capital Stage again this year.

I first saw this show — written by Michael Carleton, Jim Fitzgerald and Gary Alvarez, and directed this year by Jonathan Williams — in 2004 and thought it hilarious then. The appeal has not diminished over the years.

While this is an intelligent, funny show in its own right, what makes it work is the strong cast of three, who must each sweat off a few pounds during every performance.

Eric Wheeler, as Eric, is determined to present a straight version of “A Christmas Carol” but runs into opposition from his two partners, Peter Mohrmann and Gary Martinez, who are tired of repeating the Dickens story every year and want to pay tribute to all those other BHCs (Beloved Holiday Classics) of screen, TV and print. Eric agrees, just as long as “A Christmas Carol” is included.

And off they go.

The trio elicits suggestions from the audience for favorite movies, television programs, Christmas foods, traditions, commercials, etc. It doesn’t stop at Christmas, but also gives a nod to Hanukkah (“It bears similarities to other Jewish festivals: They tried to kill us. We survived. Let’s eat!”) and Kwanzaa (“The best part of Kwanzaa is that you’ll never see a special called ‘A Very Brady Kwanzaa.’ “)

But the meat of the show is the retelling of all the stories we all know so well.

Wheeler is reluctantly dragged into the project when he is dressed as The Grinch for a very funny send-up of “How the Grinch Stole Christmas.” Later, he will shine in such roles as Hermie, the elf who wants to be a dentist from “Rudolph the Red Nose Reindeer” (hilariously renamed, for copyright reasons) and makes a fabulous Scotsman.

A wonderful impersonator, Wheeler’s Scrooge (so perfect in voice and body language as The Simpsons’ Mr. Smithers), Tim Gunn from “Project Runway,” and Jimmy Stewart from “It’s A Wonderful Life” are spot-on.

Mohrmann as the Ghosts of Past, Present and Future, his wonderful recreation of host Jim Lange on the fruitcake version of “The Dating Game,” his funny Yukon Cornelius from “Rudolph the Red-Nosed Reindeer,” and even his attempt at being supermodel Heidi Klum are all great fun (and he is particularly fetching in his Carmen Miranda headpiece in the opening segments).

Mohrmann also shares with the audience Christmas customs from around the world, such as the story of Holland’s “Sinterklaass,” who arrives on a steamer from Spain with his helper, a twisted dark gnome known as “Black Peter” who punishes bad children. Just to put the “joy” in Christmas, you know.

And each year, I try to find a different way to say how much I love Martinez’s characterizations but keep coming back to the fact that he is the heart of this show. Zaniness abounds throughout, but when Martinez steps into the spotlight as Linus and tells us the true meaning of Christmas, or becomes Cindy-Lou Who asking the Grinch why he is taking her Christmas tree, or talks to George Bailey (from “It’s a Wonderful Life”) as Clarence Goodbody, the angel trying to get his wings, there is no denying that he reminds us what Christmas should be about.

The script for this show is usually updated, this year adding a line about pepper spray, which didn’t get quite the big laugh they’d hoped. (“Too soon?” asks Mohrmann.)

The show is so fast-paced as to leave you breathless, whether from the pace, or from laughing. It’s a wonderful way to see all of your own personal favorite BHCs in one place for one price.

Scenic design this year is by Jonathan Williams, and if I am remembering correctly from previous productions, is not as lavish as before, but with the larger area of the new Cap Stage theater, the cast is able to interact with the audience more, and that is more fun.

Do yourself a favor and treat yourself and your family to this show. It is an absolute delight, whose enjoyment does not diminish with multiple viewings. As you leave the Capital Stage theater, you’ll be ready for the Christmas season and may go about greeting everyone with a cheery “Mata-Ki-Te-Rangi” (“Merry Christmas” in Icelandic).
Posted by Bev Sykes at 8:34 PM No comments: 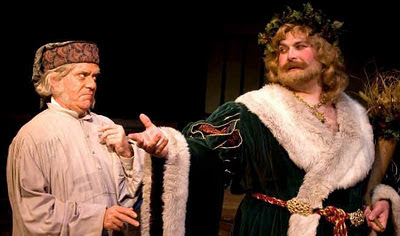 On reviewing Sacramento Theatre Company’s “A Christmas Carol” last year, I made three suggestions for improving the show: turn down the thunder, cut the fog in half and get rid of the reverberation on Marley’s mic.

It’s nice to see how much power I have, since those are the same three suggestions I would give this time. While the thunder may be a tad less loud, there is still entirely too much of it. Some scenes are so filled with fog, it’s impossible to see the actors. They were, for example, well into the opening scene between Scrooge and the Ghost of Christmas yet to come before I even saw the hooded ghost.

But what do I know?

As for Marley’s mic, Jim Lane is too good an actor to be sabotaged by a distorted voice that requires him to overact to make it effective. Nonetheless, Lane offers a suitably chilling performance.

The Dickens classic has been enjoyed in book, on stage, on radio and on screen for decades without all this technological assist and has done just fine. Why mess around with it now?

That said, however, the popular holiday classic is once again captivating audiences on Sacramento Theatre Company’s main stage.

This is STC’s specially commissioned 1987 adaptation of “A Christmas Carol,” by Richard Hellesen. Music was written by STC’s then-resident composer David de Berry. Hellesen uses the device of having the characters tell the story as they move sets and then move in to become the characters about whom they are speaking. DeBerry’s music does indeed sound like old Christmas music that you can’t quite place, but you’re sure you’ve heard somewhere before.

The cast is smaller than in some years (22 as opposed to 30 to 40 actors), and judging by the program bios, all are very happy to be in the show. Eight say they are “thrilled,” five are “excited,” two are “privileged,” one is “ecstatic” and one is “passionate” about the show!

It is such a delight to see Matt K. Miller back grousing about as everyone’s favorite grouch, Ebenezer Scrooge. Miller may be one of my favorite Scrooges, and after four productions of this show, he has had the opportunity to shape the role to fit him like a glove.

He is able to be as grumpy and mean as Dr. Seuss’ Grinch, yet when shown memories of his childhood and taken to watch his nephew and friends celebrating Christmas, he can display the innocent joy of a child. The scene of his almost, but not quite, dancing with his old love Belle (Hannah Zimmerman) was very touching.

Scrooge’s long-suffering clerk, Bob Cratchit, is played by Barry Hubbard and he makes a loving husband to his wife (Jackie Vanderbeck) and a wonderful father to their five children, the youngest of whom is, of course, the adorable crippled moppet Tiny Tim (Zac Ballard), who was as cute as he could be.

As promised by the ghost of Jacob Marley, Scrooge is visited by three spirits, who take him to witness various scenes from his past, the present and the possible future. Sydney Christoffersen (double cast with Bella Bagatelos) is the Ghost of Christmas Past. She is a second-year student with STC’s Young Professional’s Conservatory and obviously is a talented student who shows great promise.

The indomitable Michael RJ Campbell returns for his third time as the Ghost of Christmas Present, a larger-than-life spirit whose entrance is always the high point of the STC production.

Jerald Bolden is the hooded Ghost of Christmas Yet to Come (when you can see him through the thick fog). The ghost does not speak, but is really good at pointing ominously!

Others worthy of note in the cast include Emily Miller (double-cast with Meghan Greene) as Ebenezer’s sister, Fan. She sings the beautiful “Home at Christmas Time,” a touching ballad. Likewise, Courtney Shannon (double-cast with Marcos Orozco) is very moving as the beggar child.

And I think anybody with a character name like “turkey boy” deserves to get his name in a review. Good job, Dafydd Wynne! (Wynne does triple duty in this production, also playing Ebenezer the Child and Edward Cratchit).

It should also be noted that in addition to being Jacob Marley, Jim Lane also appears as several other characters throughout the evening.

The Ghost of Christmas Present exposes “ignorance” and “want” to Ebenezer to make him face the plight of the poor and destitute outside his own door. With street people shivering in the December cold along the streets of midtown Sacramento, we, like Scrooge, would do well to open our own eyes and do whatever we can to help wherever we can this holiday season.