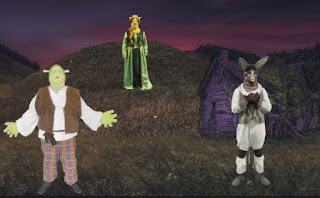 “I never want to touch a computer again for the rest of my life.,” says Steve Isaacson, musical director and videographer of the Davis Musical Theater Company’s latest video production, “Shrek,” directed and choreographed by wife Jan Isaacson.

Isaacson spent six weeks putting together some 300 videos, videos made by the 20 people in the cast of the show, some of them playing more than one role.  “I put on 20 pounds just sitting at my computer all day,” Isaacson jokes.  He finished the editing at 6 p.m. before the 8 p.m. opening night.

The end result of  Isaacson’s work is remarkable.  I was impressed with his last video presentation of “Cinderella,” which had some wonderful moments and a few not so wonderful moments. Unlike “Cinderella,” the technology of “Shrek” is much more professional, though using house lights instead of theater lights gives the show more of a “cartoony” feel, which works fine for this cartoony story.

As with “Cinderella,” the “sets” for this show are projected on green screens, so are amazingly professional.  Isaacson explains that they have some 40-45 green screens, used on the stage and in people’s homes.  The end result is excellent, with incredible forest scenes and an impressive lava scene with the sound of bacon sizzling.

Not only is there a full video production,, but conversations among groups of characters are done live, using Zoom, so the actors are there live for each performance.  Not having to be in Davis to perform, actors were able to participate from Italy, Costa Rica, Hawaii, San Diego and other places.

Jan Isaacson has always done well with choreography for non-dancers, but with “Shrek,” her choreography is even better than usual and Steve’s ability to make 20 or more dancers dance together across the screen has to be seen to be appreciated.

The actors for this production are excellent.  This is the story of an ogre, Shrek, who at seven years of age, was thrown out of his house by his parents and into the world to make his living. They warn him that because of his looks, he will be shunned by the world, and an angry mob will be the last thing he will see before he dies.

DMTC regular Adam Sartain (Beauty and the Beast, Man of La Mancha, Titanic) plays the grumpy Shrek very well.  The head piece of his costume makes it a bit difficult for him to be believable as an ogre, but his voice is excellent and one gradually warms to him throughout the evening.

When all the fairy tale creatures are banished from the Kingdom of Duloc by the diminutive Lord Farquaad (Andy Hyun), they move onto Shrek’s land and he travels to see Farquaad to see how to get them off, since he prefers to live alone.

An outstanding performance is given by campus minister Judah Dwight, as Donkey, whom Shrek rescues from Lord Farquaad’s guards and who insists on tagging along with Shrek.  Whenever Dwight is on stage, it’s difficult to look at anybody but him, he has created such a memorable character.

Farquaad gives Shrek the task of rescuing Princess Fiona from the lava surrounded castle so that he may marry her himself.  Morgan Bartoe is a beautiful Fiona, until her secret is revealed.   Chloe Aldete plays the young Fiona and Jadine Young is the teen Fiona.  “I Know It’s Today” is the song the girls sing as Fiona reaches adulthood.

Other performances worth mentioning are Lauren DePass as Pinocchio, Arianna Manabat as the dragon, Hugo Figueroa as the King and Hanna Salas as the Queen.  Mary Young, who has performed with DMTC since it's very beginning, is the Mama Bear and Dannette Vassar, who has been with the company since 1997, is Mama Ogre

DMTC will be performing “Mary Poppins” in the theater , on the stage, in September, so unless we are hit with another wave of coronavirus this will be the last virtual performance.  It’s well worth seeing for many reasons, but the technical expertise of Steve Isaacson makes it an outstanding production.