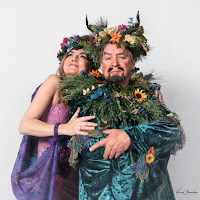 Rodger McDonald, the man who excels at everything, proves the point by directing the Woodland Opera House’s visually stunning production of Shakespeare’s “A Midsummer Night’s Dream.” He also gives a commanding performance as Oberon, king of the fairies.

McDonald has previously directed 11 main stage shows, and appeared in 19.

Jordan Hayakawa is the mischievously irresistible Puck (with the wonderful Spock ears), who delights in playing pranks on mortals. Hayakawa is lithe and elfin and seems to be everywhere at once. She is a pleasure to watch from before the show begins while she and other fairies hide in and around the audience, playfully impish.

Theseus (Matt Franck), Duke of Athens, is about to be married to Hippolita, former queen of the Amazons, portrayed by Jessica Hanselman Grey, a steady, loving companion.

Then there are the lovers. Hermia (Rachel Foster) is in love with Lysander (Thomas Dean) but her father Egeus (Robert Payawal) wants her to marry Demetrius (Brent Randolph), who loves Hermia, but her friend Helena (Analise Langford-Clark) is in love with Demetrius. It’s enough to make your head spin, though the actors keep it all straight and give good performances.

Payawal may be the only one with problems. He speaks too fast and too low to be understood some of the time, and he seems to be reciting lines rather than embodying the role of a father trying get his daughter married off to a desirable suitor, particularly in Act 2.

Egeus asks for the help of Theseus to force his daughter to marry. Theseus gives the young girl the choice of marrying Demetrius, or entering a convent.

Hermia and Lysander decide to elope, but on the way, they stop to rest in a forest populated by fairies, led by Titania in a wonderful portrayal by Patricia Glass (her costume is also great).
The forest is absolutely beautiful and high marks go to scenic designers Joey and Craig Vincent, especially for the way those green trees and that beautiful blossom-bearing tree can be moved around to create different looks.

Erin Bruni gets recognition as the fairy Mustardseed, who sings a lovely, lyrical a cappella song.
We meet the”mechanics,” five workmen who are rehearsing a play and hope to present it at the wedding of Theseus and Hippolita. The group is led by Quince (Steve Mackay, in another strong performance) trying to rein in Bottom (Phil Stommel), a ham who thinks he’s the greatest actor of all time.

Stommel, in his first performance at the Opera House, is wonderful in the role, but when his head is turned into that of a donkey by Puck, the costume is absolutely marvelous looking but it muffles Stommel’s words so that it is difficult to decipher what he is saying, which is really a shame because it’s such a great look!

Puck also casts a spell on Hermia and Demetrius, which, of course, does not go as planned, but teaches Helena that you should be careful what you wish for.

In the end, as it must in a comedy, everything gets straightened out, the right couples join together and all prepare for the big wedding, where Bottom gets to prove what a truly awful actor he is.

Puck has the final words, apologizing to all for the tricks she has played throughout the evening. (“If these shadows have offended…”)

This is a fun production, worth seeing for the acting and for the set, both of which are outstanding.
Posted by Bev Sykes at 3:15 PM No comments:

The folks at the B Street Theatre picked the perfect vehicle to introduce patrons to their beautiful new theater, The Sofia (the Sofia Tsakopoulos Center for the Arts), on Capitol Avenue (there is a huge parking garage next door).

The first thing to notice about the expanded, 380-seat main theater is the size of the stage. Now with wings and fly space, scenic designer Samantha Reno was able to build huge walls that slide to the side, large backdrops that roll down and back up again, and pieces that fly in from the top to create an impressive, often-changing scene.

For the first show, Buck Busfield, producing artistic director/director, chose Richard Bean’s “One Man, Two Guvnors,” the insanely funny modern adaptation of Carlo Goldoni’s 18th-century Italian farce, “The Servant of Two Masters.” The show was a runaway hit for James Cordon when it opened in England in 2011.

In the pre-show greeting, Busfield explained to the audience that after last season’s “Who’s Afraid of Virginia Woolf,” the patrons complained that it made them think too much — and he promised they wouldn’t have to think at all to enjoy this comedy.

The show opens with music by a “Skiffle band” playing rockabilly songs composed by Grant Olding. The basic band is Jerry McGuire, Olivia Schaperjohn and Hunter Henrickson, with various members of the cast joining in as fillers during scene changes.

As for the cast, this is the perfect show to unite many of the old-time, familiar B Street regulars — Stephanie Altholz, Jason Kuykendall, Elisabeth Nunziato, Jahi Kearse, Kurt Johnson, Tara Sissom, Greg Alexander, John Lamb, Amy Kelly and Dave Pierini.

Leading them all is Peter Story as Francis Henshall, an out-of-work (and starving) skiffle player (musician) who finds himself employed by two different men, and must keep both from learning about the other.

Story is outstanding in a role that requires perfect comic timing, a flair for physical comedy, and a personality warm enough to make interaction with the audience a part of the show.

All of the others are at the top of their game, particularly Kuykendall, the nervous, not-overly-bright billionaire searching for his fiancée, Rachel, and Altholz, delightful as Rachel, pretending to be her murdered brother Roscoe.

Kelly plays several of the smaller roles, and also appears as part of the band. I am always impressed with the range of this actress’ talents, who, in this show, is particularly good at pratfalls. Lots of them.
As they say, hilarity ensues, including confusion with doors, food fights, dropped pants, police chases, mistaken identities and even bird poop.

The rapid-fire dialogue is crisp and comical, including the alliteration surrounding the letter “d”: “He was diagnosed with diarrhea but died of diabetes in Dagenham.”

Francis also delivers a very-funny monologue with himself about whether he is confused or not (“I don’t get confused that easily. Yes I do. I’m my own worst enemy. Stop being negative. I’m not being negative.”) that ends up with him fighting with himself. More pratfalls.

This splendidly silly modern masterpiece is two hours of non-stop laughing. I dare anyone to see it and not come out with a smile on their face.

Labels: 2 Guvnors, B Street, One Man


Those boys from New Jersey are back at the Sacramento Community Center Theater. “Jersey Boys,” the wildly popular story of Frankie Valli and the Four Seasons, has returned — and based on the nearly-sold-out house and enthusiastic reception, Sacramento is glad of it.

Whether you were raised in the 1950s, the 1960s or the 1970s, it’s hard to think there would be people who would not love this musical retelling of the story of The Four Seasons.

In its day, the group sold more than 100 million records and produced numerous hit songs (“Sherry,” “Big Girls Don’t Cry” and “Can’t Take My Eyes Off of You,” to name a few), many of which are performed in this show.

Before the “British Invasion,” American popular music was dominated by two groups: The Beach Boys and The Four Seasons. Unlike The Beatles, the Four Seasons (Tommy DeVito, Nick Massi, Bob Gaudio and Frankie Valli) came before paparazzi, and the group fell apart due to internal fighting and personal problems at the height of its popularity.

After they disappeared from the music scene, nobody cared about the background of a bunch of blue-collar Jersey guys from the streets until book writers Marshall Brickman and Rick Elice came along and realized there was plenty of drama in the story. Director Des McAnuff, a longtime Four Seasons fan, gave the project the green light for development and opening at his La Jolla Playhouse in 2004.
After its move to New York, the show was nominated for eight Tony Awards and won four, and achieved such popularity that some predicted it could run “for decades.”

The story is told from the perspective of each of the members separately. Corey Greenan is DeVito, the tough guy, organizer of the group, and the one who got into the most trouble. He was the guy who left first and forced a restructuring of the music.

Tommaso Antico is Gaudio, who wrote most of the music and whose friendship and business partnership with Valli, which lasted for more than 20 years, was based on a simple handshake.
Chris Stevens is Massi, bass guitarist, who did most of the vocal arrangements, but who burned out on touring and just wanted to go home.

At the head of the group, of course, was Valli (Jonny Wexler). Wexler’s falsetto delivery seems to my doddering memory to be spot on, and he far better represents the character than the actor who played him the last time the show came through town.

The Four Seasons went through a number of names, including the Four Lovers and the Variatones, but they settled on The Four Seasons, which was the name of the night club where they were currently appearing.

Wade Dooley is Bob Crewe, the astrology-loving producer-lyricist, and Todd DuBail is Gyp DeCarlo, the Mafia Don who takes a liking to Frankie.

McAnuff’s staging and the non-stop energy of the cast are infectious. The enormous set by Klara Zieglerova — a massive thing of metal catwalks, fences, curving staircases and screens that move in and out for cartoon-like illustrations and video clips — add to the “massive” feel of it all.

But in the end, it is the music and the relationship among the four that makes this show and gives it its irresistible appeal.
Posted by Bev Sykes at 5:25 PM No comments: