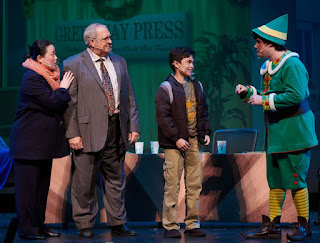 If you are looking for a bright, happy, colorful way to start your holiday celebration, get yourself to the Woodland Opera House for its delightful production of “Elf, the Musical,” written by Matthew Sklar and Chad Beguelin. The book is adapted by Bob Martin and Thomas Meehan from the 2003 film. The musical ran on Broadway in the Christmas seasons of 2010–11 and 2012–13, in the West End in the 2015–16 season, and has continued to tour annually in the U.S. during the Christmas holiday season.

Buddy Hobbs (Patrick Jordan), a young orphan child, mistakenly crawls into Santa Claus' bag of gifts and is transported back to the North Pole. After discovering the baby, Santa (Gil Sebastian) and his elves decide to raise the child as an elf. Years later, Buddy finds out that he's actually a human being and, at Santa's prompting, heads off to New York City in search of his father, Walter Hobbs (Dave Lack).

Buddy’s story is told by Santa, reading it as a book. Sebastian is a perfect Santa, though his role is small.

Faced with the harsh reality that Walter is on the naughty list for not believing in Santa and his young son, Michael (Lauren Battaglia), also doesn't believe in Santa, Buddy is determined to win over his birth family and help New York City remember the true meaning of Christmas. He is consistently optimistic.

Director/Choreographer Andrea St. Clair has assembled a strong cast of actors, headed by Jordan, an engaging non-elf, trying to learn the ways of human life and make his father, who had no knowledge of his existence, love him.

Lack is a great Hobbs, an overworked businessman who is amazed to discover he has a 30 year old son, but who also has feelings for wife Emily (Marie Nearing) and son (Battaglia).  (This is quite a different character from the greedy movie Hobbs.)

The program bio says Battaglia is in her first major role and she is outstanding, as is Nearing, as Hobbs’ wife, who ultimately becomes Buddy’s support.  She and Michael share a lovely duet, “I’ll Believe in You,” where Michael says that if Santa can give him a day he can spend with his Dad, then he will believe in him.

Emily Owens Evans is Jovie, Buddy’s co-worker, who falls in love with him.  After being stood up, she shares her misgivings about Buddy with a beautifully sung “Never Fall in Love”. She returns to Buddy, a slightly more humanized elf, with a strong reprise of “A Christmas Song”.

Karen Fox is strong as Deb, Hobbs’ secretary, who explains to Buddy that a shredder is a machine that makes snow.

Aaron Baikie-Rick, one of those performers who takes charge in every scene he is in, gives a great performance as the manager, who leads a great candy cane dance, “Sparklejollytwinklejingley”

The first act is filled with wonderful one-liners and jokes that have the audience laughing pretty much continuously.  Sadly, the hearing aid they gave me didn’t work and I missed most of the dialog, but the act is also heavy with singing and dancing, so I only missed the jokes, and not the feeling for the story.  Fortunately I was able to get a working hearing aid at intermission.

Music is recorded, with music direction by Lori Jarvey and Denise Miles’ costumes are such fun, especially the costumes for the dancing elves in the opening scene.  John Ewing is credited with “set and projection design.”  Very clever projections are used for background in each scene, so realistic it’s sometimes difficult to tell if it’s a projection we are seeing, or the real thing.

This is a long show (2-1/2 hours, with 15 minute intermission) and we see a group of drunken fake Santas at one point, which may need explaining to very young children, but this is a wonderful show to bring your kids to for the holidays, especially when Santa, grounded in Central Park, finally gets his sleigh into the air to flying off to finish delivering toys. 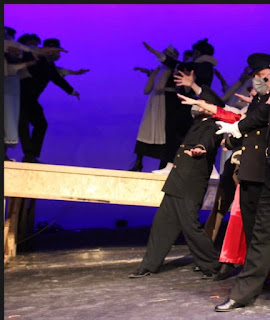 One hundred and nine years after the Titanic struck an iceberg near Newfoundland, Canada and sank, the ship has set sail again, this time onto the stage of the Davis Musical Theater Company (DMTC).

With story and book by Peter Stone, music and lyrics by Maury Yeston, “Titanic, the Musical” won five Tony awards, including Best Musical in 1997 and ran for 804 performances.  DMTC director Steve Isaacson heard the overture and “within seconds I was an instant fan.” He directed a production in 2006, and another in 2012, on the 100th anniversary of the sinking of the ship.

The set, designed by Isaacson, is very modest, with the Captain’s quarters to one side of the stage and a mostly blank stage to represent the ship, though the looks of awe on all the cast as they appear to be looking at the ship is so real that you can imagine yourself viewing the ship as well.  As usual, Jean Henderson’s costumes are beautiful.

Titanic’s designer, Thomas Andrews (Travis Nagler) opens the show talking about the wonderous things mankind has accomplished (“In Every Age”). which has enabled him to design this marvelous ship. Throughout the show, he keeps checking his blueprints, even as the ship is sinking.

Andrews is joined by stoker Barrett (J Sing, who also plays Mr. DaMico, Pittman, and The Major) who is amazed by the ship (“How did they build the Titanic”). Barrett has one of the stronger voices and every number he sings is a hit.

This is a big cast – nearly 40 (some of whom play more than one role)  – and there are many wonderful voices.  Unlike the movie “Titanic,” there is no one love story that carries throughout the show, but more a study of individuals and couples who are taking the cruise, like Alice Beane (Chris Cay Stewart) and her husband Edgar (Arthur Vassar).  Alice is a 2nd class passenger who is starstruck and determined to see as much of the first class as possible.  Stewart has a wonderful voice and is very funny.  She shines in her “I have danced” after sneaking in to dance with the first class crowd.

Laura M. Smith and Scott Minor are wonderful as first class passengers Ida and Isidor Strauss, who have been married 40 years and who decide to go down with the ship together.  Their “Still” is one of the highlights of the show.

Andy Hyun plays Farrell and also plays telegraph operator Harold Bride, who sends a personal message for Barrett, proposing to his girlfriend (“The Proposal”) and then spends the rest of the evening sending off frantic SOS message.

Clocky McDowell is excellent as Henry Etches, the First Class Steward, perhaps at his best with the chorus “Doing the Latest Rag” (with choreography by Ron Cisneros).

Svea Benson, a junior high school student in her first community theater production, is very cute as the bellboy.

The first act ends with the hitting of the iceberg, and the second act the attempt to save as many passengers as possible, given that the ship has fewer than half the boats needed to carry all of them.  The sinking of the ship, with tilting stage is very impressive, especially as Andrews continues to visualize redesigning the ship, as he attempts to climb the tilt.

The finale, with survivors on the deck of the rescue ship Carpathia bidding farewell to their loved ones is very emotional and will bring a tear or two.

Isaacson has once again paid tribute to the Titanic and has done it very well.

All actors wear masks, and all audience members are required as well.  Audience must also show documentation of vaccination or recent negative COVID testing.