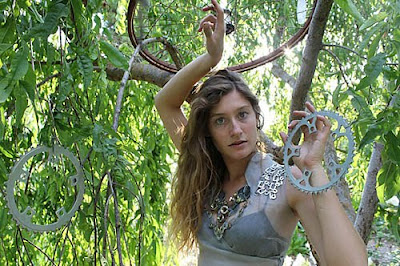 If you’re looking for something to do for entertainment on one of these late summer nights, why not get yourself over to the UC Davis Arboretum Gazebo and take in the fun production of “A Midsummer Night’s Dream”? This is the fifth production of the no-longer-fledgling Davis Shakespeare Ensemble.

Even if you are familiar with this Shakespeare comedy, I think you will find the setting and the theme of this production, directed by Rob Salas, surprising. It is a loving salute to the bicycle.

“Without a doubt, bicycles make Davis unique. What has fascinated us about bikes is not just their presence in Davis or their convenience, but something deeper,” the program notes say. “We are inspired by the thriving culture and sense of community that comes from a town that embraces bikes. We are inspired by their mechanics, which still seem magical amidst today’s advanced technology.”

Bicycle pieces adorn the posts of the gazebo, bicycle tires are strung together to create a ladder to the crawl space above the stage, and characters make their entrances either riding or pushing all sorts of wheeled vehicles, from scooters to clunker bicycles, to specially designed cycles. (Special thanks are given to The Davis Bike Collective and The Bike People.)

Since there is no specific set designer listed in the program, this was obviously a collaborative effort, and very successful.

Local artist Rebecca Portney is credited with “more intricate props,” including the figure of the young Indian Prince kidnapped by Titania, Queen of the fairies (Jessica Spaw, who also plays Hyppolyta, betrothed to Theseus, the Duke of Athens).

“A Midsummer Night’s Dream” tells several stories, each of which occurs during a single summer night in a magical forest outside Athens, in which fairies play pranks on lovesick mortals, and earnest youths endure comical romantic confusion.

(There is a bit of confusion for the audience as well, since the cast has chosen to rearrange scenes, putting a scene between Oberon and Titania as the opening scene, rather than later in the play.

(“We moved the scenes around to set a precedent for the use of bike parts, the importance of the magical fairy world, and to get the feel for why Titania and Oberon are fighting,” explains Steph Hankinson. “Usually we feel that this gets lost in the action of the play and with the ‘changeling child’ never being a physical presence.”

The cast of this show numbers nine, with most actors playing two or three parts. The exception is Robert Williamson, playing the slow-witted Bottom, head of the bike mechanics, rehearsing a play in the woods to later present to Theseus (Rob Salas, who also plays Oberon, the king of the fairies).

Williamson is a terrible actor. But that’s OK, because he’s supposed to be and one must be a pretty good actor to portray the character of a believably terrible actor. Bottom is later turned into a donkey by the mischievous fairy Puck (Gia Battista) and I won’t even begin to describe his donkey costume. It must be seen to be believed. It is definitely in keeping with the bicycle theme; kudos to costume designer Caitlin Cisek, who outdid herself on that one!

Battista (also playing Philostrate, charged with organizing entertainment for the Duke’s wedding) is a less playful Robin Goodfellow (“Puck”) than many, but still manages to create enough mayhem for everyone.

The ever-solid Hankinson (who also plays Quince, the mechanic and Cobweb the fairy) is Egeus, who brings daughter Hermia (Brianna Owens) to the court of Theseus, asking that the Duke convince her to marry Demetrius (Jose Cagigal, also playing the mechanic Snout and Peaseblossom), her mother’s choice for her daughter.

(Owens is adorable as Hermia, and yet changes character completely in her roles as the mechanic Starveling and one of the fairies. It’s a very talented performance.)

Headstrong Hermia, however, is in love with Lysander (Will Klundt, also playing mechanic Flute and Mustardseed).

To confuse matters even further, Hermia’s best friend Helena (Erika Haaland, also mechanic Snug and Moth) is in love with Demetrius, who can’t stand her because he is in love with Helena. The plot is confusing enough itself, without having actors play multiple roles! However, thanks to ingenious costuming by Cisek, somehow it all works, and works well.

The mechanics finally get to put on their play, the story of Pyramus and Thisbe, which is worthy of any slapstick comedy you may have seen. It’s hilarious. My favorite costume was that of Snout, who plays the wall with a “chink,” through which the star-crossed lovers communicate. Brilliant bit of costume choice!

This production works on so many different levels. The costumes and scenery are a big hit, but the play would go nowhere without the work of nine very talented actors. Do yourself a favor and see this show before it ends Oct. 2.

Rodgers and Hammerstein’s “The King and I,” directed by Steve Isaacson and choreographed by Michael Miilar, was the show that closed out Davis Musical Theatre Company’s run at the Varsity Theatre in 2005. A beautiful new production, directed and choreographed by Jan Isaacson, is opening DMTC’s 27th season.

Right off the bat, I give failing marks to the audience, most of whom rudely talked among themselves throughout the overture. Even though the lights in the theater were not turned down until the end, the orchestra, which was quite good, deserves better than this!

The sets, by Steve Isaacson, are based on the design by Juan Ramos (who also played the King in that 2005 production). They are gorgeous, particularly the King’s bedroom, which is spectacular. The combination of the warm colors in the set and the warm lighting design (by Isaacson and Dannette Vassar) makes for a very inviting setting on which to place the story.

In previous productions of this musical — a subtext to the story of Anna Leonowens, the widow who comes to Siam with her young son to become teacher to the children of Siam’s beloved King Mongkut — there’s a sense of sexual tension, as the relationship between Anna and the King develops. This is particularly evident in the jealousy the king shows toward Anna’s friendship with British Envoy Sir Edward Ramsey (Gabriel Jacobo) and the dance between the King and Anna following the banquet held in Ramsey’s honor.

The decision to cast an older actress as Anna removes that sexual tension and leaves the way open to explore the professional relationship between the protagonists. Chris Cay Stewart has a lovely voice and beautifully portrays the relationship between herself and the King’s court (especially the children), and the on-again, off-again friendship with the King. Her age also makes for a more poignant and beautiful reminiscence as she sings “Hello, Young Lovers,” remembering her marriage to her husband, Tom.

Mark Suarze is a strong, vibrant King, straddling the fence between long-held cultural beliefs and his desire to move Siam into the modern age. He is powerful in his emotional numbers, particularly “A Puzzlement,” where he questions what he knows, what he should know and what he knows nothing about, but should.

Anna’s son, Louis, is played by William Chan, a talented young actor who could give lessons to many in the cast about projection, as his dialog was crystal-clear at all times. Sadly, that could not be said of Larry Lipman, playing the captain of the ship that brought the Leonowens to Siam. I never heard a word he said, and he also seemed to stumble over his lines as well.

Lenore Sebastian plays Lady Tiang, the King’s First Wife and the mother to Prince Chulalongkorn (Horace Gonzales), who is heir to his father’s throne. Sebastian is a wise and loving wife and that voice of hers is as warm and delicious as melted butter.

The lovers Tuptim (Lydia Smith), gift of the King of Burma to the King of Siam, and her escort Lun Tha (Kevin Foster), were very sweet. Smith has a lovely voice in her lower register, but loses it somewhat in her higher notes. Foster, however, has an amazing voice and showed it at its best.

Adam Sartain is an imposing Kralahome, the principal guard of the King, wary of anything that might upset either his boss or the long-held traditions of the court.

Tuptim’s theatrical performance of “The Small House of Uncle Thomas” was a real highlight of the evening and was danced beautifully by Shannon Mo, Kimmie Ruanto, Allison Ruanto, Rachel Pinto, Natalie Mo and Anthony Swaminathan. Jenny Plasse, who plays “poor Eliza,” deserves special notice, as she was quite good.

Of course, “The King and I” would not be as popular were it not for the King’s children, each one cuter than the other: Jenny Chen, Naomi Debello, Amaralyn Ewey, Cedric Hughes, Emma Kehr, Lily Linaweaver, Elena Lipman, Natalie Mo, Jihan Moon, Jimin Moon,Keri Ruanto, Kimmie Ruanto and Anthony Swaminathan.