Fits and Parts: My Life in Stages 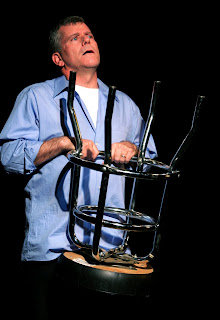 This is a difficult time for theater across the country. Many previously reliable sources for donations have dried up and with the economy in the shape it’s in, patrons aren’t going out to see live theater as much right now. Most of the local area theater companies are struggling to find inventive ways to stay afloat.

Sacramento Theater Company was scheduled to end its 2008-2009 season with “Noises Off,” a rollicking comedy about what it’s really like to put on a show. It’s a big show that takes a huge set and costs a lot to produce. But the money wasn’t there to produce it. According to Artistic Director Peggy Shannon, in comments made to a pre-show audience, funds scheduled to be available during the summer will allow for the show to open the 2009-2010 season, but cancellation of “Noises Off” left a big hole in the current season.

The ever-inventive Shannon turned to resident actor and long-time STC favorite Matt K. Miller and asked if he would be willing to write and perform a one-man show about the journey of his life as an actor, and the circuitous route he took to Sacramento and to STC. Miller agreed and some 3-4 weeks later, the final draft of “Fits and Parts: My Life in Stages” was approved.

The show opened Saturday night to what had to have been a disappointingly small crowd, but those who were there laughed heartily, clapped loudly, and gave Miller a standing ovation at the conclusion of the 90 minute piece.

One of the most fun things a theater goer can do is to sit and listen to other theater folks reminisce about their experiences. Many of America’s most beloved performers made a good living after their movie careers were behind them by going out and sharing the stories of their careers with fans. Actors like Gregory Peck, Gene Kelly, and Cary Grant did it. Elaine Stritch turned her memories into a Broadway show, “Elaine Stritch at Liberty,” which was a smash hit in New York and in London.

He talks of growing up as the youngest of five in a Catholic family where he quickly learned how to get the attention of adults, and credits his Mom with being his best audience, even when he was misbehaving.

He talks about Catholic school and how much he enjoyed being an altar boy because it was like giving a performance, where the altar served as his stage, he wore a costume, and used the bells rung during the Mass as a prop.

He talks about first paying gig and his years in Chicago doing “Shear Madness,” America’s longest running play. He was able to come and go from the play, depending on when he had other gigs, and over several years played all of the male roles.

He likens his years in Los Angeles to Elisabeth Kubler-Ross’s stages of grief: Denial, Anger, Bargaining, Depression and Acceptance. While in LA he discovered a talent for doing voice overs and was much in demand for translations of Anime. (The Internet Movie Database lists nearly 50 cartoons for which he has done voice-overs).

Finally, in the fourth of his four stages, he talks about meeting Peggy Shannon and the circumstances that led him to Sacramento, where he has met the love of his life, married, and is now raising an 18 month old son. (When asked at the Q&A following the show what advice he would give his son, should the boy want to go into show business, he quipped “double knot your shoe laces and make sure your fly is zipped.”)

In the traditional pre-show talk, Shannon refuses to talk about what the audience will hear in Miller’s 90 minute monologue and, in truth, to discuss it more than peripherally would ruin the surprise of taking the journey with Miller, but suffice it to say that it is a sparkling, witty delight from start to finish.
Posted by Bev Sykes at 10:13 PM