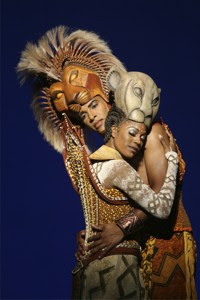 There's no doubt about it — "The Lion King" is one impressive spectacle. The opening number alone is worth the price of admission and well deserving of the cheers it elicits from the audience.

The Sacramento Community Theater underwent massive revamping for this touring production of the Tony-award winning version of Walt Disney's popular cartoon. Two new aisles have been created by removing four seats in each row, from the stage to the back of the house, giving room for animals to enter from the back of the theater. Two of the performers also begin the show in the balcony, thus putting the entire audience squarely in the middle of the action.

As the opening number, "Circle of Life," unfolds, sung by the wise old baboon Rafiki (Phindile Mkhize), the stage gradually fills with wildlife. Antelope jump, birds fly, giraffes stroll magnetically, cheetahs walk cautiously, zebras prance, an elephant lumbers onto the stage, followed by her baby, and, as the gigantic sun rises, the audience is transported to some African savannah and the story begins.

The story of "The Lion King," by Roger Allers and Irene Mecchi, can really be described as "Hamlet on the Savannah": the young prince whose father is murdered by his brother, the son's angst and guilt, the father becoming a larger-than-life figure after death, his ghostly counsel giving the son courage to return to avenge his father, the comic relief characters of Timon and Pumbaa.

But the Shakespeare analogy fades into the background when confronted by such a feast for the senses. "The Lion King" relies more on costume and spectacular lighting design (by Richard Holder) than actual set pieces, and so the show is equally as impressive in a touring company as it was when I saw it in London.

Director Julie Taymor (the first woman in Broadway history to win the Tony award for best director of a musical) also designed the costumes, which are an integral part of this show's appeal. Faced with the task of bringing a cast of animals to life, she chose to make the human actors actually part of the animals themselves, without losing their "humanness." And so it is that animal and human blend together so seamlessly that one is able to believe in the "animalness" of the characters.

This production features an outstanding cast. Dionne Randolph is an imposing Mufasa, the king. He has perfected the slow, rolling moves of a big cat, and his love for his young son is a touching thing to see.

Chaz Marcus Fleming (or Marquis Kofi Rodriguez — which young actor was not specified) was outstanding as young Simba, with lots of high energy, yet convincing in this tender moments with Mufasa.

Andre Jackson, the adult Simba, nicely morphed into a high-energy adolescent, who achieves nobility when he accepts his role and returns to Pride Rock to assume his rightful place as Mufasa's heir.

Timothy Carter as Scar, the lion you love to hate, was appropriately haughty and dislikeable, as were hyenas Andrea Jones, Randy Donaldson and Andrew Frace.

Tony Freeman added comic moments, as Zazu, the king's right hand hornbill. He had some of the funniest lines in the show.

Bob Amaral as Pumbaa the warthog and Mark Shunock as Timon the meerkat were very funny, and were especially valuable in giving some substance to Act 2.

The music by Elton John and Tim Rice has become familiar to anyone with a child of a certain age. The costumes are some of the most ingenious designed for a musical production. And the production values overall are outstanding.

The meat of this show is really in Act 1. It has the best songs and most of the story has been told by the intermission. While Act 2 is necessary to bring things full circle, it has the feel of something that has been padded to the nth degree. It has more of the wonderful choreography of Garth Fagan, and more of those antelope prancing across the stage, but the act seems lackluster in comparison to Act 1. It does, however, have one of the show's most spectacular effects, in the apparition of Mufasa.

"The Lion King" is worth every penny. It's a wonderful night of theater for the entire family.
Posted by Bev Sykes at 4:50 PM